Testing the Waters In an epic summer adventure, three rising W&L sophomores built their own boat and sailed it down the Red and Mississippi rivers from Shreveport, Louisiana, to New Orleans. 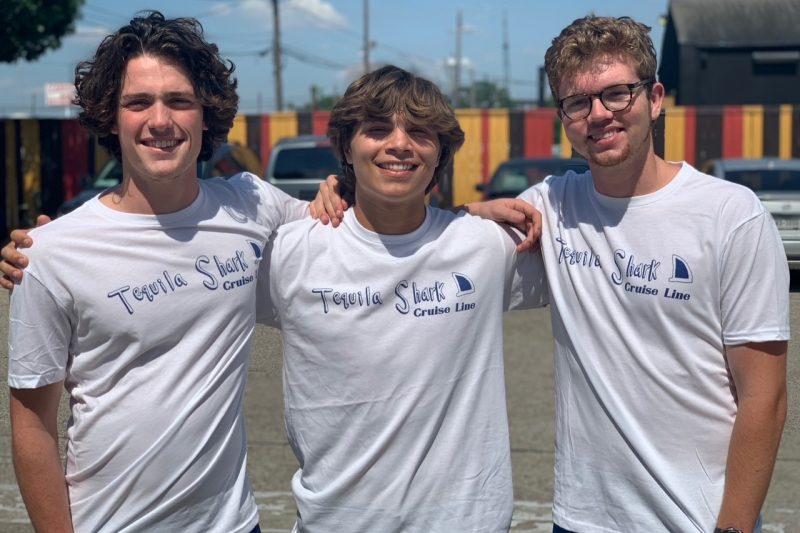 During their first semester at Washington and Lee University, new friends Ned Newton ’24, Jak Krouse ’24 and McCoy Patterson ’24 were chatting one day when someone floated what seemed like a hare-brained idea: Let’s build a raft and take it down the Mississippi River.

“I think every guy my age has thought of rafting down the Mississippi at some point in their life,” Patterson said. “It’s the classic American adventure, essentially.”

As autumn rolled into winter, they started to seriously discuss the logistics of their concept. By the time summer shimmered into view, they’d hashed it out so much – and told so many people about it – that turning back no longer felt like an option. Besides, they figured, this summer might be their last opportunity.

“We had no internships or anything of that nature this summer, so we figured this would be the best time to do it,” Newton said. “It sounded really thrilling, like something most people can’t say they’ve done, and we felt like we could see it through.”

Early June found Newton, Patterson and Krouse at Patterson’s home in San Antonio, Texas, where they met to build their river craft out of 55-gallon drums and lumber – actually more of a pontoon boat than a raft. None of them had built a boat before, but they’d watched some YouTube videos and they had help from relatives, neighbors, and a friend and fellow W&L student, Lily Miggins ’24.

The Tequila Shark crew poses for a pic with their boat and two of the people who helped them build it: Patterson’s grandfather, Clarence Bray, and Lily Miggins ’24.

The finished boat was 8-by-12 feet in size and outfitted with a 1984 outboard motor they purchased on Facebook Marketplace. Every boat needs a name, and this one’s was spray-painted across the side: Tequila Shark. Additional preparations included obtaining and studying navigational charts for both rivers, obtaining a river-boating license, gathering gear for camping and emergencies, and reading about the experiences of folks who’ve made a similar journey.

Their parents watched the lead-up with a mixture of amusement and trepidation. “All of our parents thought it was pretty insane,” Patterson said. “They were just like, ‘What are these kids getting into?’ But slowly, I think they realized that we had our stuff together.”

They promised their parents they’d stay in touch along the way. They also agreed to begin their journey on the Red River, a smaller tributary to the Mississippi, which allowed them to get their bearings and familiarize themselves with the craft before hitting the much bigger and more dangerous river. As soon as the boat was finished, it was towed to Shreveport, Louisiana, to begin the long journey.

With the Tequila Shark loaded down with food, water, gasoline and other supplies, it was New Orleans or bust. And at times during the following week, “bust” would feel like a real possibility.

On day one, June 8, they spotted their first alligator and passed the first of many massive barges they would encounter on both the Red and Mississippi rivers. Its size was sobering: It was big enough to mow down the little Tequila Shark with barely a ripple. 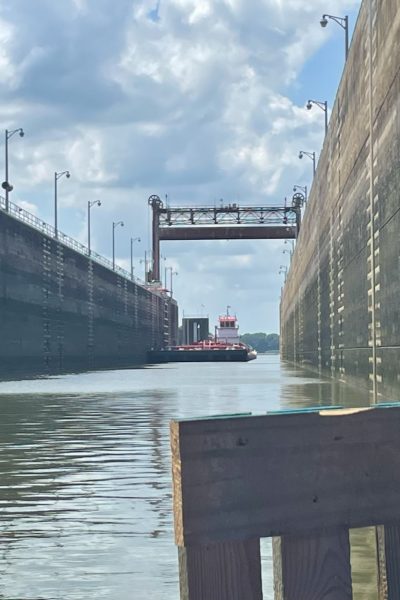 The first day on the Red River also brought their initial encounter with a lock, a device used for raising and lowering watercraft between stretches of waterways that are at different levels. After they exited, the current pushed the boat against a wall, where it was surrounded by logs and other floating debris. They broke two paddles trying to navigate away from the wall and were only able to escape after a special boat with a grill on the front arrived and pushed debris out of their way.

The aftermath of this experience, which Krouse declared “literally the most stressful thing I’ve ever done in my entire life,” was documented on the Tequila Shark Instagram account (@tequila.shark), which they updated daily with photos, videos and amusing captions. “It was such an eventful few days that something funny or absurd happened every day,” Patterson said.

The next day brought them to Alexandria, Louisiana, where a police officer drove them to the gas station and gave them two cases of water. Also in Alexandria, they met a reporter from the local NBC affiliate, KALB. The reporter’s story about them, they would later learn, was picked up and aired by stations as far away as Toronto. Suddenly, their Instagram account was attracting lots of advice, offers of help and encouraging comments from strangers.

“I love a wacky idea and this is perfect!” commented one user. “So happy for you! Ramble on!”

The next couple days on the Red brought more locks and dams and more encounters with barges, so the adventurers were feeling more confident as they approached the Mississippi. As boats enter the channel that connects the Red and Mississippi rivers, they must travel for several miles against a strong current. This is an area with thick barge traffic, so Patterson, Krouse and Newton decided to navigate it at night, entering the channel about 10:30 p.m.

Not always the most comfortable of sleeping conditions.

They would later learn that this area is notorious for its dangerous eddies, which sometimes suck large debris, like logs, under the currents and then shoot them back through the surface with terrific force. To conquer the current, they pushed their straining motor for hours, finally reaching the Mississippi in the wee hours of the morning. Exhausted, they decided to beach and camp on shore, but about 200 yards from their target, the motor cut out.

“We were all sleep-deprived and exhausted, and it was pitch-black,” Patterson said. “We had limited visibility and the current was pushing against us, so we had to jump in and swim the boat to shore in an area that we later discovered was populated by bull sharks that come in from the Gulf, and alligators. We could hear little splashes all around us in the water. There was a lot of secondhand realizing how dangerous it was. We got very lucky.”

Finally on shore, they groggily pitched a tent and grabbed a few hours of sleep, waking up to daylight and the realization that they had camped right outside Angola, the largest maximum-security prison in the country. They tried their motor again, but it refused to start.

“I lost faith for like a half-second,” Newton said. “I thought we were so done.”

Using their air horn, the travelers were able to flag down a passing fisherman. “He was our guardian angel,” Newton said. “He just came out of nowhere on his jon boat, hitched us up and took us to the other bank.” The angel assessed the motor and said he bet they’d ruptured a fuel line. He towed them to a boat ramp, then drove them out to get the supplies they needed to fix it. Fifteen dollars and half a day later, Tequila Shark was back in business. 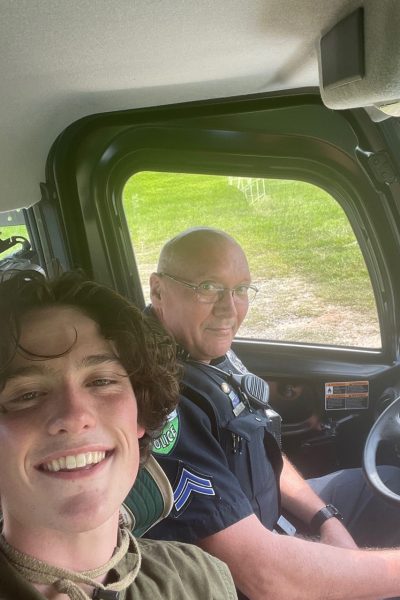 A police officer gives Patterson a lift to the store for supplies.

The helpful fisherman and the friendly cop are two of a host of strangers who made the journey safer, easier and more enjoyable for Newton, Krouse and Patterson. Every time they passed through a lock, a worker would come down, admire their boat from atop the high walls, and ask questions about their trip. As they continued, they realized their reputation was preceding them on the river. People would see them and say, “Oh, I heard about you.”

“As we went along, barges would slow down when they saw us,” Newton said. “We started air horning at barges and they would honk back at us. Barge captains would come out and wave to us and take pics with us.”

In Baton Rouge, a couple that had heard about their adventure met them on shore and took them to a fire station, where they took showers, ate dinner and posed for photos with firefighters. The couple also referred them to Manresa, a Jesuit retreat 60 miles downriver from Baton Rouge where they later stopped and were given cold sodas, food and a place to charge their phones. One fisherman even gave them a huge live catfish, which they tied to the boat, but it escaped when they drifted into a thicket 10 minutes later.

The three agreed that the friends they met along the way and the generosity showed to them were the highlight of the trip. “That was through and through the coolest part about it,” Newton said, “all the people we met along the way.”

In Baton Rouge, the boys were treated to dinner and showers at a fire station.

Seven days after the Tequila Shark departed Shreveport, it pulled up to the shore in New Orleans. “House of the Rising Sun” blared from their radio, but they drowned it out with excited shouts and whoops. By that point, the back of their trusty craft was taking on water, but as Newton put it in one Instagram video, “I really don’t care… we’re there!”

From start to finish, the entire adventure – including building the boat – took only two weeks, which makes Newton, Krouse and Patterson think perhaps this isn’t their last wild experience. They’re already pondering their next travel adventure, and they plan to make a short film about this journey using footage they gathered along the way.

They say that what seemed like an impossible idea at first became a learning experience with lessons about the good in humanity, group dynamics, problem solving and toughing it out under difficult circumstances. “In the end, we made this thing work and we are really happy with how we collaborated on it,” Patterson said.

They’ll also have a heck of a story to tell for years to come.

“This is something that I will totally remember well for the rest of my life,” Newton said, “and to have a memory like that is priceless.”