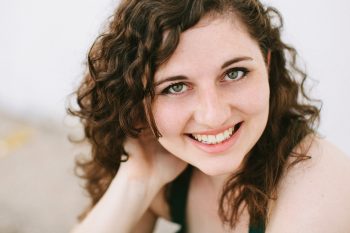 Every once in a while someone comes along who reminds us that philanthropy is both profoundly creative and simpler than we think. For Eileen Small ’15, being a philanthropist is as simple as taking the ideas you have for how things could be better and doing something about them. But even before that was her philanthropic strategy, it was a life approach.

At W&L, Eileen was one of those students who embodied the growth of arts that has occurred on campus over the last few decades. She double majored in theater and studio art and minored in dance. Her undergraduate career included both acting and production roles in the prestigious Bentley musicals, as well as off-campus experiences at the Moscow Art Theater School and Rhode Island School of Design. During her junior year she founded (540) Productions and began producing musical theater in Rockbridge County.

Despite her impressive resume, Eileen’s own narrative of her W&L experience is notably down to earth. For her, college progressed by getting an idea, trying it and then pushing it further — or if it failed, taking it in a different direction. The humble printmaking enclave within the art department was where that took place.

“After the first woodcut I ever made, I said ‘I’m never doing that again!’” Eileen laughs. “It’s so hard!” But, the medium grew on her. Creating woodcuts was tedious, but the immediacy of the resulting print was gratifying. Woodcuts became a way for Eileen to conjure a fanciful vision of the industrial structures of her youth in west Texas, where both her parents worked in the petroleum industry and where wind energy farms, power plants and the mechanical structures of the oil and gas industry were ubiquitous in the landscape.

“At first, my vision dictated the medium of woodcut, but then I started getting into it,” says Eileen. Art instructor Leigh Ann Beavers was key to Eileen’s maturation as a printmaker. “The way Leigh Ann coaches is great. Once you work on a block she says it’s great, but then she pushes you to think outside the box. You would think it was finished, but it was just the jumping off place.” In her senior year, Eileen made a gigantic woodcut that she worked on for four months. 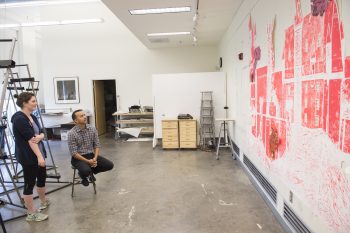 Although fine arts have come a long way at W&L in recent years, studio art is still a fairly small department. Eileen worked in the art studio with the same small group of art majors for four years. In their senior year, five of them learned about the Southern Graphics Council International Conference — a week-long gathering of printmakers being held that year in Knoxville, Tennessee. While some other departments at W&L have dedicated funds for sending students to conferences, the art department did not.

With the guidance of Professor Beavers, Eileen and her classmates held art sales and sold Christmas and greeting cards to raise funds. When they got there, it was an “earth shattering experience” to spend an entire week with working artists, said Eileen. “Before that conference, I hadn’t met people doing that kind of work outside of W&L.” The conference provided an overview of the world of modern printmaking, with presentations and demonstrations by artists from all over the world. “It was amazing to see the work that people are doing right now, and see the ways in which it was all moving in the same direction, and then to think about how our work could be moving in that direction too.”

Today, Eileen’s professional focus has gravitated to the performing arts. During a summer internship with the Broadway-based Telsey + Company casting firm, she fell in love with the art of casting for theatrical productions. “It’s like painting a picture, but with people,” Eileen says. Now she is focused on casting for television and film with Arvold Casting, based in Charlottesville, Virginia.

Although she is not professionally immersed in printmaking, the learning experience Eileen had with printmaking at W&L stayed with her. “I had those pre-professional experiences in theater at W&L — but there wasn’t anything set up like that in art, especially printmaking. I didn’t want other art students to have to work as hard for things necessary for their careers — the types of things other departments have the means to do.”

“I had those pre-professional experiences in theater at W&L — but there wasn’t anything set up like that in art, especially printmaking. I didn’t want other art students to have to work as hard for things necessary for their careers — the types of things other departments have the means to do.”
Eileen Small ’15

Eileen sat down with her dad about a year ago and they began talking about what could be done. The Small family has a strong philanthropic streak and Eileen’s parents, Jamie ’81 and Alison Small, have supported causes at W&L as diverse as creating a first-year seminar class to providing bikes for students to have a sustainable form of transportation around Lexington.

Eileen’s conversation with her dad resulted in a creative, philanthropic solution to a problem. The Eileen A. Small Endowment for Printmaking was created at W&L in October of 2016. Eileen’s gift represents W&L’s first dedicated endowment for printmaking. The endowment will support printmaking students in pre-professional experiences that will bring them into contact with practicing artists. For example, the endowment could send art students to professional conferences and to visit special exhibits or artists’ studios.

Like her parents, Eileen’s philanthropy is passionate and hands-on. “This is what I know and what I am excited about,” she says. “I know the department head really well who manages the fund, and I’m still in touch with some of the students there.” But at some point, she realizes those individuals will move on, and others will take their place. Her goal is to stay in touch with the department over time and continue working with the next head on how her endowment can continue to benefit printmaking students. As she speaks about the future, her voice holds both confidence and curiosity. “I hope to grow the endowment. I’m excited to see what it will turn into. I would love for students to be able to do even more with it — whole summer experiences or going abroad.”

After all, this is just the jumping off place.