The Big Dig Who are we? Professor Alison Bell '91 uncovers clues about W&L’s complex identity through artifacts recovered near Liberty Hall Ruins. 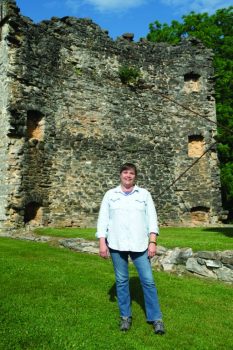 Why take an Anthropology Course?
In the words of pioneering anthropologist Margaret Mead, we teach students “how to think, not what to think.” Anthropologists study human beings from their emergence to the present time, focusing on anything that helps us understand their culture (learned ways of thinking) and behavior (actions). That means we study some five million years of human evolution, ancient civilizations, prehistoric and historic diasporas and the rich contemporary global variation in languages, economic arrangements, social stratification and more.

The wealth of human experience gives students fodder for thinking about themselves and their world. Do we, for example, tend to mistake our specific learned ways of thinking for human nature? Or when encountering a popular or academic claim about gender or race, how can we separate fact from inference and evaluate both? As Mead said, education should empower students to come, “unhampered by prejudices, clear-eyed to the choices which lie before them.”

Interesting Campus Artifact?
I’m fascinated by the transfer-printed ceramics found at sites on the Liberty Hall campus. The site of the Steward’s House (located a few yards from the Liberty Hall Ruins), for example, served as a student dining hall for 10 years (1793-1803), but we believe it was a quarter for enslaved people from 1803 to the 1860s. Ceramic fashions changed quickly and in well-documented ways during the 1800s, and so we know that many of the sherds of bowls, cups and plates found around the Steward’s House could not have been used by students, but were rather used by some of the 25 enslaved people who occupied some of the former academy buildings. I wonder what these objects might have meant to the enslaved people who used them?

Cemeteries and asylums?
During my research on cemeteries in the Valley of Virginia, I became fascinated by the burial ground at Western State Lunatic Asylum (now called Hospital) in Staunton. Thousands of former patients or inmates were buried there, between the 1830s and 1980s. Some had diagnoses more or less recognizable today (like melancholia and cerebral concussion), but others point to the very different cultural and medical constructs of the day. Early patients were admitted as suffering from hard study, for example, religious excitement, dissolute habits and inhaling tobacco fumes. I’m researching the evolution in social views of behaviors that put people beyond the pale of the normal human community.

In one era, doctors used elegant architecture, ornamental gardens, horse-drawn pleasure carriages, soft clothing and warm baths to try to bring patients back into the human fold. In another era, doctors used physical constraints, compulsory sterilizations, manual labor and isolation in attempts to tame patients. Material objects, spaces and landscapes were central to projects of patrolling boundaries of deviance and acceptability.

Favorite Class
The Anthropology of American History (SOAN 238) investigates four centuries of the American past through diverse sources — the “written and the wrought” — including census returns, wills and tax records as well as archaeological sites and artifacts, architecture (vernacular and formal), cemeteries, oral histories and historic photographs. Students in the class explore the foreign terrain of the recent past to discover surprising, complicated histories of race, gender and class in America.

Epitaph
“To die is different from what anyone supposed, and luckier,” Walt Whitman, “Leaves of Grass.”