The Intersection of Art and Science: Lauren Sturdy ’11 Finding answers in the space where science and art intersect. 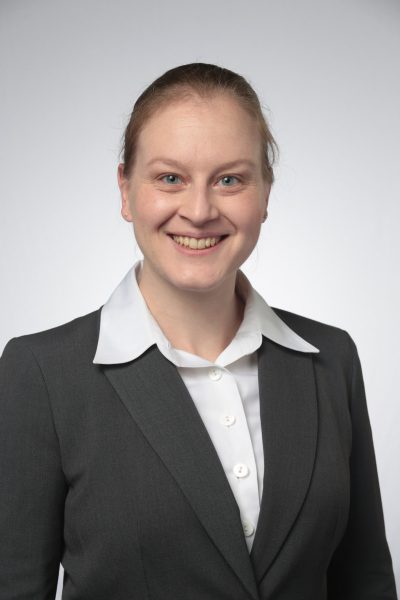 Fans of the PBS program “Antiques Roadshow” know that the art experts often recommend to a guest that their painting be restored.

What they might not realize is that there is a body of science behind the conservation of a painting. It is this intersection of art and science that attracted Lauren Sturdy ’11 to a Ph.D. program in materials science and engineering at Northwestern University.

A chemistry and art history major, Sturdy conducts research on the relationship between the structures of matter on a molecular- and macro-scale level. Her research looks at the aging of artists’ paints — how they change over time and how different environmental conditions make them dry differently. Changes in chemical properties affect the mechanical properties of paint.

“My research is a couple of steps removed from the actual conservation of art,” she explained. Changes in temperature and oxygen levels affect paint, but she said it is hard for a conservator to actually experiment with these effects without fear of damaging the painting. That’s where her research is valuable to predict outcomes under various scenarios.

Now completing her fifth and final year of the program, Sturdy hopes to teach engineering on the collegiate level, after first obtaining a post-doctoral academic position. She received a National Science Foundation fellowship to underwrite some of her doctoral studies.

Sturdy also is conducting research for another project examining the mechanical properties of rubber that could benefit the tire industry. Although tires and art seem far removed from one another, Sturdy says there are some links. For instance, she uses the same instrument — a quartz crystal microbalance — to conduct research for both projects. She also gets similar types of information that helps her in both areas.

Attracted to art conservation since she was in high school in Williamsburg, Virginia, Sturdy was able to explore the topic in more depth at W&L, where she also began looking at textile conservation. She received a Johnson Opportunity Grant to do a summer internship at the Smithsonian’s Museum of Conservation Institute.

While there she helped re-house the Black Fashion museum collection — photographing, vacuuming, cataloguing and packing objects for long-term storage. She also co-designed an experiment to deposit goethite onto wool, polyester and linen fabrics, using her chemistry background to adapt an established process to a much smaller scale.

The internship also accomplished something else important to Sturdy. She realized that she was still more interested in art conservation science than in textiles.

The summer after her freshman year at W&L, Sturdy had an internship at the Netherlands Institute for Cultural Heritage in Amsterdam. “I learned there that research is hard and tedious,” she said.

Sturdy came to W&L because of its “great academic reputation,” and because she met Erich Uffelman, the Bentley Professor of Chemistry, during a weekend program for prospective students. “I found W&L to be a close-knit community where professors care about students,” she said.

She enrolled in Uffelman’s course on Art and Science, which “opened my eyes to how many different ways art could be studied from a scientific point of view,” she said.

As a student, Sturdy worked at the Reeves Center, which houses the university’s collection of Asian, European and American porcelain, and University Collections, where she helped catalogue and inventory the collection. There, she was influenced by Patricia Hobbs, associate director, and Peter Grover ’73, who confirmed her interest in the broad field of art conservation, she said.

While at the Reeves Center, Sturdy and another student conducted an experiment to analyze a plate from the George Washington dinner service, decorated with the insignia of the Society of the Cincinnati, against a fake. The two provided scientific proof of the forgery, using W&L’s portable x-ray fluorescence spectrometer to match minerals from the two plates. They presented their findings at a conference of the American Institute for Conservation.

When not in the lab at W&L, Sturdy served as president of the Craft Guild for two years. The group of students and some staff met to work on handicrafts, such as knitting, crocheting or origami.

She also sang for four years in the a cappella group The Washingtones. The group performed on campus for Parents Weekend and for open mics on the campus radio station.

Like most scientists, Sturdy is motivated by finding answers. She wants to know why paintings age the way they do and find better ways to preserve them. “I enjoy doing experiments and understanding the outcomes,” she said. “I am intrigued by the why questions.”