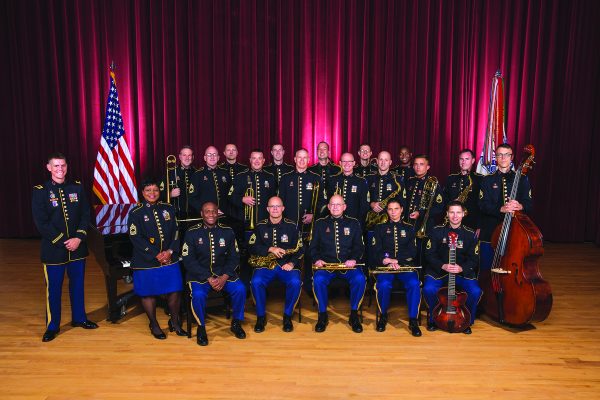 The Lenfest Center for the Arts at Washington and Lee University presents the Jazz Ambassadors: the United States Army’s Official Touring Big Band for a one-night engagement on March 21 at 7:30 p.m. in the Keller Theater.

Formed in 1969, the Jazz Ambassadors of Washington, D.C., has performed in 50 states and all over the world. Comprised of the military’s finest practitioners of jazz and swing, this 20-member jazz ensemble’s notable performances include concerts at international jazz festivals in Montreux, Switzerland; Newport, Rhode Island; Toronto, Canada; Brussels, Belgium; and the North Sea Jazz Festival in the Netherlands.

Gordon Goodwin, Bobby Shew, Ernie Watts and the Dave Brubeck All-Star Quintet are just a few of the outstanding jazz artists who have shared the stage with the Jazz Ambassadors. The band has been featured in joint concerts with Marvin Hamlisch and the Pittsburgh Symphony Orchestra, the San Diego Symphony Orchestra, the Seattle Symphony Pops, the Colorado Pops Orchestra and the New York Pops at Carnegie Hall.

Tickets are free, but required. Call the Lenfest Center box office at 458-8000 to reserve your tickets. Box office hours are Monday through Friday 9- 11 a.m. and 1- 3 p.m. and 2 hours prior to each ticketed performance.