The Secret is in the Sauce Pete Hendricks '66, 69L and his son Nat are marketing a handcrafted cocktail mix. 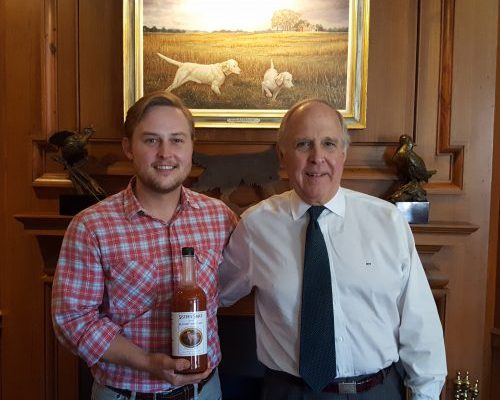 For years, Pete Hendricks, a real estate attorney in Atlanta, has served family and friends his special Bloody Mary cocktail, crafted from a mix he created over 50 years ago.

“People kept saying, ‘You’re nuts not to do anything with this,’ ” the 1966 graduate of Washington and Lee University and a 1969 graduate of the W&L Law School told the Reporter Newspapers.

About a year ago, his son, Nat, listened to that advice and decided to market and sell the mix full time. Known as Sister’s Sauce, the handcrafted blend is named in honor of a beloved bird dog, and her image graces the label on the bottle.

According to Pete, an early version of the mix was tested in the early 1970s when Pete’s wife, Kathy, ran a cooking and catering business called Cook’s Corner.

When Nat, who used to work for a logistics firm, decided to take the product mainstream, he got a commercial cooking certification, modified Pete’s recipe and began hand-bottling the mix. Pete said Nat “got all the junk out of it. It has no MSG or high-fructose corn syrup, and it is gluten-free.”

Sister’s Sauce launched a year ago at a pop-up shop in Midtown’s Ponce City Market and is now available at specialty stores around Atlanta, including Lucy’s Market in Buckhead.