The Show Must Go On Camera The cast and crew of W&L’s upcoming Bentley Musical, “Little Women,” tackled a host of pandemic-related challenges to produce a film version of the show that will be screened for audiences March 30-April 2.

“It has felt like a puzzle that you are not quite sure how to put together.”

It’s hard to imagine how the pandemic could have made Washington and Lee University’s upcoming show, “Little Women,” any more challenging to stage.

Not only did the actors record their dialogue and singing for the Robert O. and Elizabeth M. Bentley Musical before learning their movements on stage, but the technical team had to film the action and match it to the audio. In addition, the actors had to stay physically distanced both in and out of character, and the set shop ran on a skeleton crew.

“We didn’t know exactly what the show was going to look like,” said Grace Pelosky ’22, who plays Jo March. “It has felt like a puzzle that you are not quite sure how to put together. It’s definitely been a learning experience, and I think it has been really nice to have everyone going through this totally brand-new experience together.”

Other W&L theater and dance productions over the past year have been successfully filmed and screened for virtual audiences because of COVID-19. Rob Mish, director of the Lenfest Center for the Arts and “Little Women,” wanted to do whatever it took to achieve the highest-quality audio possible for the musical. He asked Shawn Paul Evans, head of the Theater, Dance, and Film Studies Department, and John Lindberg, manager of technical operations for the Lenfest Center, if it would be possible to capture dialogue and songs in advance, then match that up with the filmed version.

Evans and Lindberg knew it was going to take much more time and effort to pull that off, but they were up to the challenge.

“The technical crew knew some of what they were doing, but I was flying blind and nobody involved had ever done anything like this on this scale,” Mish said. 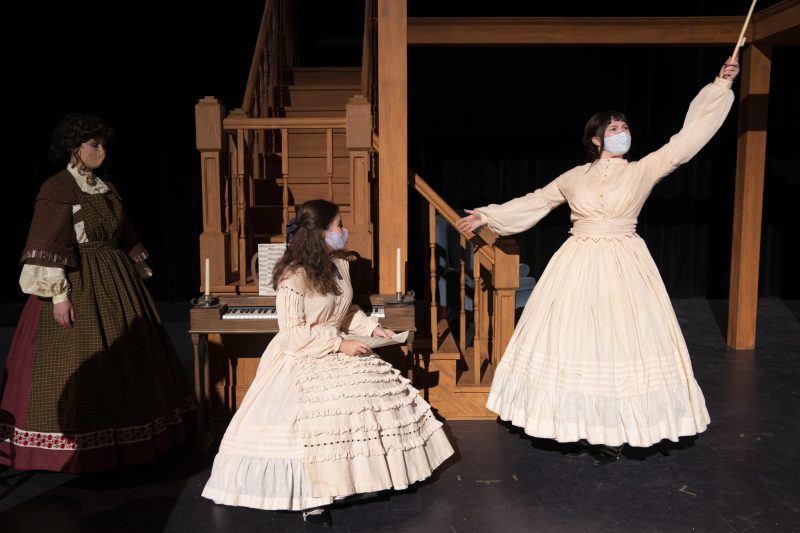 Marmee (Keren Katz ’22) and Beth (Adele Roulston ’24) look on as Jo (Grace Pelosky ’22) gets theatrical during a rehearsal of “Little Women.”

To record music and dialogue, Lindberg turned Keller Theatre into a recording studio complete with four recording stations spaced out in a semicircle for physical distancing. Instead of isolating each actor’s voice, he recorded everyone in the same space. “We made the decision to go for a realistic approach to how it would sound, as if we were doing the show live in Keller,” he said.

During song recordings, Patrick Summers, the show’s musical director, accompanied the students on keyboard, but only they could hear his accompaniment as they sang. He also tackled the Herculean task of playing and recording all of the official tracks himself so the technical team could overlay the student voices to create finished songs for the production.

Following pandemic protocols put in place by the Music Department, actors had to take breaks after 30 minutes of singing and leave the space in order to clear the air of potential virus particles. The technical team also had to record some dialogue out of order, in part because a couple cast members came down with COVID-19 and had to be quarantined during the recording process. As a result, Lindberg had to edit snippets together and, in some cases, hunt for lines.

“It was weird for us, doing everything in chunks,” said Michael McLaughlin ’23, one of the cast members who had to be quarantined, “and it must be hell for John Lindberg to have to splice everything together.” 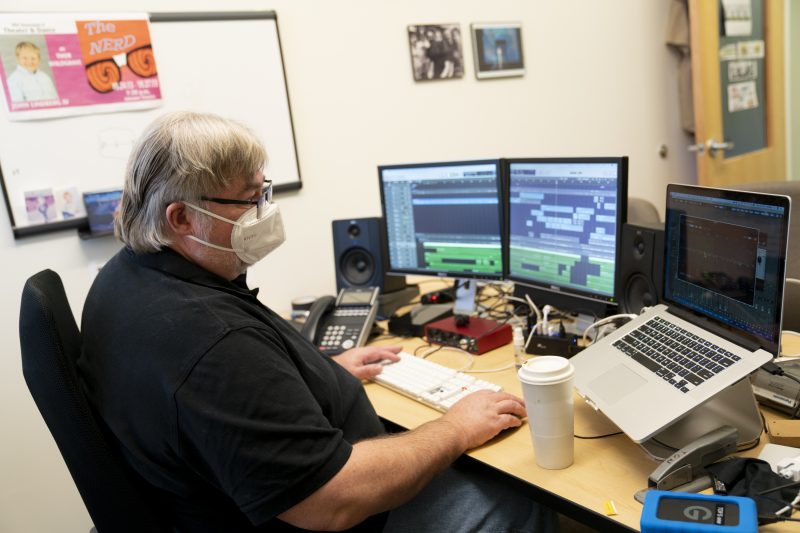 McLaughlin, who plays Theodore “Laurie” Laurence, has starred in several stage productions before, but he said this production was like preparing for a play in reverse.

“Usually you’d do a table reading, then start on blocking with the script, then eventually go off book, but still make connections between the lines and movements,” he said. “But for this, we learned the music first, intensively, and then recorded it all. We also learned all of our lines without blocking, which was tough because you’d know what you were saying, but not what you were doing, especially since you haven’t taken time to really build the character.”

After lyrics and dialogue were recorded, the cast went on to learn blocking, or stage positions and movements, before it came time to film the play. Evans managed the set-up for filming, which involved three digital cameras shooting different angles and an iPhone for close-ups. Student volunteers monitored each camera during shooting, which also took place in Keller Theatre.

The crew filmed the play out of sequence in order to avoid repeatedly swapping out the sets. Lindberg supplied an early edit of the dialogue and songs, and the students went through the motions while listening to the playback. Pelosky said wearing masks during filming taught cast members a lot about emoting with only the top halves of their faces.

“I do a lot with my eyes and eyebrows to begin with,” she said, “but we’re having to convey everything you would with your mouth using only our eyes and brows.” 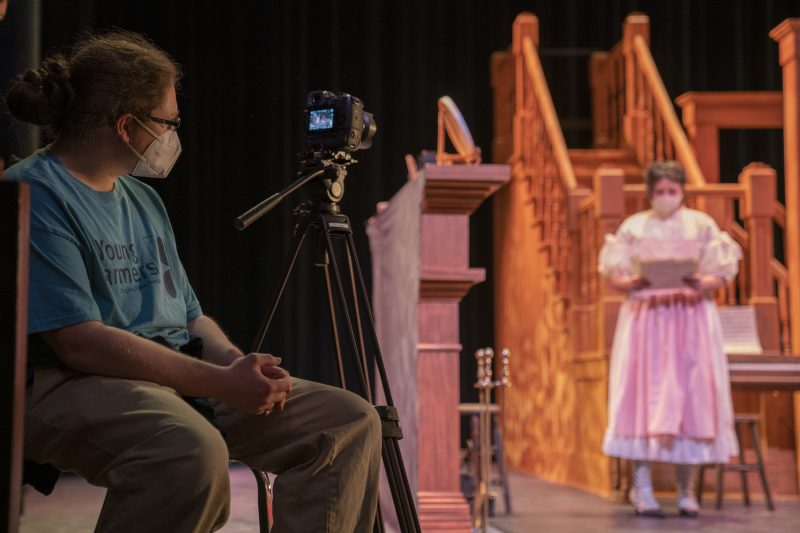 James Eaton ’23 monitors a camera during filming of “Little Women” in Keller Theatre.

Under normal circumstances, a production of “Little Women,” which revolves around the closely knit March family, would involve plenty of physical contact among characters, but social distancing requirements meant the actors in this version could not be that intimate on stage. They avoided hugging and kissing even during engagement, wedding and death scenes.

“’Little Women'” is a huggy kind of story all the way through, and distancing really made it difficult,” Mish said.

It was especially hard for four actors —  Pelosky, Lauren Hoaglund ’22, Keren Katz ’22 and Hayley Allen ’22 — because they are not only close friends, but also roommates. Since they portrayed a mother and three daughters, Pelosky said, she was tempted to at least rest her head on a cast member’s shoulder.

Mish addressed the problem with creative use of props. For example, rather than consoling Jo with a hug after favorite sister Beth’s death, Marmee hands her a familiar picture, and Jo embraces the photo. 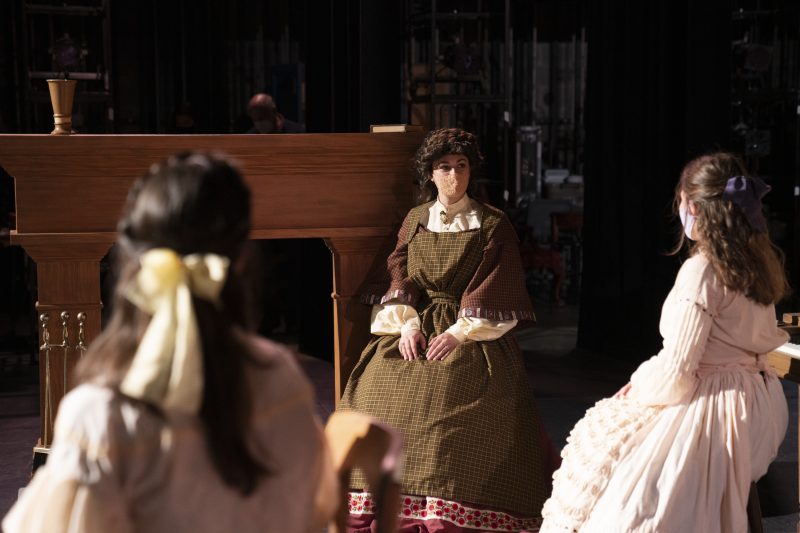 Four of the five actors who portray the March family are roommates at W&L, which made it even harder for them to stay physically distanced during the play.

The crew had their own hurdles to clear. Because of COVID-19, Fundamentals of Theater Art, colloquially known as “Hammers and Nails,” was not offered this term. Students in that course spend three lab hours per week helping build sets, in addition to assisting with scene changes, lights, sound and costumes during the show. Enrollment varies by term, but the course usually can be counted on to provide anywhere from six to more than 20 extra pairs of hands.

Theater Technical Director Tom Hackman has relied heavily on the help of two part-time local craftsmen, Gabriel Leasure and Kurt Rosenberger, to help carry out the vision of Professor of Theater Owen Collins, who designed the sets. For most productions, they would create a fully realized world for the play, but with a limited labor force, they scaled back those expectations and focused on making fewer pieces that are exceptionally detailed, such as a fireplace, a miniature piano and a staircase for the March family parlor.

“It’s so effective,” Mish said. “It’s minimalist, but so well done and so architecturally powerful.”

Even with fewer people working in the set shop and everyone wearing masks, the show required a concerted effort to physically distance while building scenery. While working together on a piece, “you have to have interaction. You can’t spread that far apart,” Hackman said. “So we work shoulder-to-shoulder, then spread apart to talk about it. Or we work in corners and, when we’re ready, bring our pieces together. So far, it’s been really good. We’ve all adopted the protocols we needed to adopt in order to keep ourselves and our families safe.” 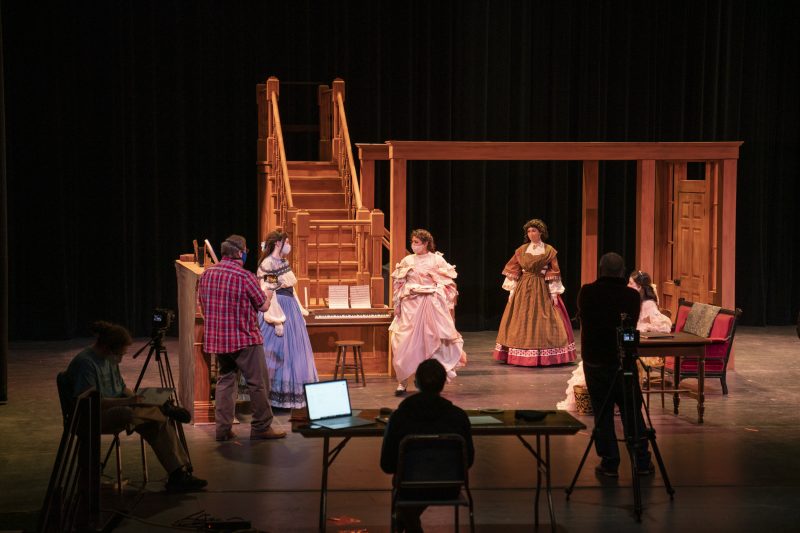 “Little Women” was filmed over the course of five evenings in Keller Theatre, then audio of dialogue and songs were added to produce a finished show.

Like many challenges caused by COVID, those foisted on the “Little Women” cast and crew had their silver linings. Recording lines and songs was almost like doing voices for animated films, something the cast was not likely to do in college. They have also now experienced acting in front of cameras.

“It definitely taught me overall that being in the mind of your character is just as important as being in your body,” Pelosky said. “That sounds like something that’s intuitive, but I didn’t prioritize it enough before. I also learned the importance of subtlety, whether in tone of voice or physical action.”

All of their hard work will come to fruition when W&L’s production of “Little Women” debuts virtually on Tuesday, March 30. The play will be streamed for free online at 7:30 p.m. each evening through Thursday, April 1. The number of access links to each performance is limited and will be distributed on a first-come, first-served basis. For more information about access and to reserve e-tickets, visit go.wlu.edu/little-women.

“After more than 40 years of directing plays and musicals, I can safely say that ‘Little Women’ was the most challenging, but also one of the most rewarding,” Mish said. “Challenging because it was completely new territory for me and very little of my directing experience was going to help; rewarding because I have never been more aware of how valuable the inherently collaborative nature of theater artists can be.”