The Sound of Music Professor Chris Dobbins and Ben Whedon ’18 are reviving a forgotten musical score for its 21st-century premiere by the W&L Orchestra.

“This will be a unique experience for the students. There’s enough meat in the score that it will challenge them, but also places where they can sit back and enjoy the experience.” 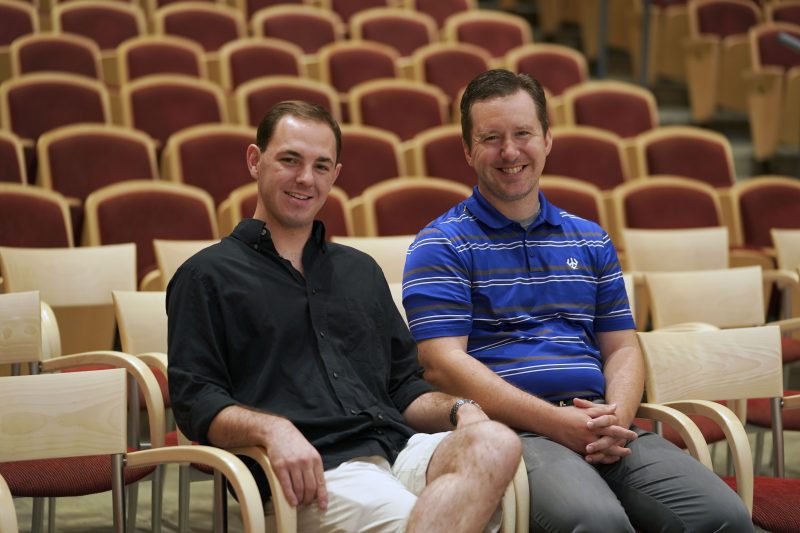 In 1920, the American composer John Alden Carpenter wrote “A Pilgrim Vision” to celebrate the 300th anniversary of the Pilgrims’ voyage to America. It had only three performances: two by the Philadelphia Symphony Orchestra and one by the New York Philharmonic. Then the score sat essentially forgotten in the archives of the Library of Congress — until last year, when Chris Dobbins, assistant professor of music at Washington and Lee University, became involved with Unearthing America’s Musical Treasures, a project spearheaded by the College Orchestra Directors Association (CODA).

“About a year ago CODA started an initiative in conjunction with the Library of Congress, which involved digging through boxes and boxes of music,” said Dobbins. “Some of it was catalogued and some of it wasn’t, but we were searching for rare music by lesser-known American composers that hadn’t been performed or was rarely performed. The goal is to make the pieces playable for a modern orchestra. We also want to perform them and make a recording of those performances, as well as parts of the scores, freely available on the CODA and Library of Congress websites.”

Dobbins settled on “A Pilgrim Vision,” which was written for a 42-piece orchestra and runs for a bit over nine minutes. The first step was to enter the score into Finale, a music-notation software program. That task fell to summer research scholar Ben Whedon ’18, who is minoring in music (his double major is accounting and business administration and European history).

The process was anything but straightforward. “It wouldn’t have been so bad other than this guy’s particular compositional techniques,” said Whedon. “Carpenter is very clear in his score about what he wants to see. For example, he’ll have articulations of accent marks over almost every note, which almost doubles the time it takes to enter the material. I’ve spent more than four weeks in a cubicle, 9 a.m. to 5 p.m., at a computer, just inputting all of this data.”

Although Whedon plays the piano and sings with the University Singers, he found parts of the score unfamiliar. “Some of it is dated,” he explained. “Some of the notations are for instruments that I’ve never had any experience with, and there’s stuff that doesn’t make a lot of sense to me that I’ve had to decipher by spending a decent amount of time Googling.” 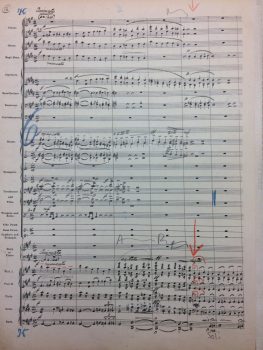 A page from “A Pilgrim Vision” by John Alden Carpenter

Carpenter’s shorthand includes not using use the appropriate key signature for the French horn parts and relying on accidentals (sharps or flats) for every single note. “I don’t know the historical context behind why that would be,” Dobbins said. “Maybe it was laziness on his part. Maybe he was a horn player, and it was easier for him to write it this way.”

Once Whedon finishes the grunt work of entering the score into Finale, he and Dobbins can begin deciphering some of what they call the “funky” shorthand. Are the extra beats in a particular measure for two parts, or is it a massive notation violation, or is it just the way composers wrote it out back in 1920?

“A lot of questions could be answered if we could look at specific instrumental parts,” said Dobbins. “But there isn’t a set of parts extant for this piece — this is all that we have. The parts created for the New York Philharmonic and the Philadelphia Symphony are lost to time, and no one can find them. A lot of composers use shorthand in their scores like Carpenter did, but it’s easy to see what they wanted when you take a look at the parts that are written out. We don’t have that luxury — that’s what makes this like a detective story.”

What story does the music tell? Whedon says a few sections imply various stages of the journey. An organ part at the beginning conjures up a final church service, a turbulent section refers to a stormy sea, and the fanfare of horns signifies the group’s arrival. “It’s not a symphonic poem,” said Whedon. “Carpenter didn’t leave specific notes as to what he was thinking, so a lot of this story is other people’s interpretation.” He says the music reminds him of the score to Disney’s “Fantasia.” “It sounds a bit like the music that accompanies cartoons. I do enjoy what I’m hearing, even if it’s just the computerized playback version out of Finale.”

Whedon’s last day is Aug. 15, and he plans on having a completed score ready, with all the instrument parts extracted and all the page turns synchronized. Dobbins will turn the material over to the Mary Washington University orchestra, which will play it through to see if he and Whedon need to iron out any other sections. Then it will be ready for the W&L Orchestra to rehearse and perform in March 2018.

“This will be a unique experience for the students,” said Dobbins. “There’s enough meat in the score that it will challenge them, but also places where they can sit back and enjoy the experience. Because they don’t get much of an opportunity to play in a large orchestra here, it will be a good experience for them to do that. We’ll be bringing in area musicians to fill out all the sections, for a total of 80 musicians. Just the string section will be nearly 50, not to mention all the brass and percussion. We will blow the roof off the Wilson Concert Hall.”

He added, “It’s not often these days that you can’t listen to a recording of a piece you’re going to play. This hasn’t been performed in almost 100 years, so it’s going to be brand new for everyone.”