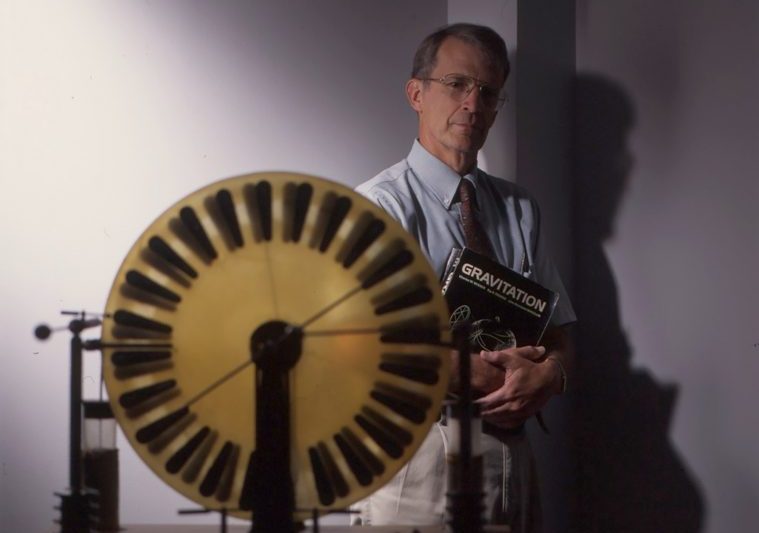 “An eloquent lecturer and extemporaneous speaker, Tom could find the kernel of any topic and wax eloquently (and briefly!) about it.”

“I did not have the privilege of serving with Tom, but my conversations with him helped me understand why he was so highly regarded,” said President Will Dudley. “He was a wise counselor whose empathy for students and faculty made him an exceptionally effective teacher and administrator. His gentle nature and dry wit belied an inner strength that served him and the university well, especially as he helped to define the role of provost at Washington and Lee. Tom epitomized the core W&L values and inspired us through his example, and we shall feel his loss. Our thoughts are with his wife, Lynn, and their family.”

Williams joined the W&L faculty in 1974 and retired from W&L in 2011, after nearly 40 years of teaching. He attended the University of Virginia, earning a B.S. in physics in 1963 and his Ph.D. in physics in 1967. He did a two-year postdoc at the National Bureau of Standards and another postdoc at the Universität Erlangen-Nürnberg in Germany. He had a one-term teaching appointment at the Virginia Military Institute and was a staff scientist at Kaman Sciences, studying electromagnetic shielding, field propagation, transmission and reception.

Williams always taught an intro to physics class: “It’s important for me to do that,” he said. His favorite class was quantum mechanics, because “that is the last class physics majors take and the one they are least likely to understand. It’s tough to sell a bill of goods that no one understands.” His research interests included quantum information theory and non-equilibrium statistical mechanics involving both analytical approaches and computer simulations to address system behavior in one and more dimensions.

“Tom Williams loved physics,” said Ron Reese, professor of physics emeritus. “He was the benevolent, humble and soft-spoken lion of the department. An eloquent lecturer and extemporaneous speaker, Tom could find the kernel of any topic and wax eloquently (and briefly!) about it. We’ve lost a great and wonderful colleague. I can hear him now chatting with the Almighty, smiling and saying, ‘So that’s how quantum mechanics and general relativity are compatible. Elegant!’ ”

Williams twice served as head of the Physics Department, as well as associate dean of the College from 1986-89, as acting dean from 2002-03, and as provost from 2003-07 before returning to teaching. During his time in Washington Hall, Williams oversaw the now thriving Campus Kitchen project, as well as the Science, Society and the Arts conference. He also helped secure the $33 million Lenfest endowment to supplement faculty salaries.

He published more than 30 articles on atomic and particle physics, many co-authored with colleagues in the physics and mathematics departments and with W&L students. In 2016, he published “Discrete Quantum Mechanics.” According to Irina Mazilu, professor of physics, “When Tom talked about writing a book, it was a toss-up between a Lexington-based detective novel or a quantum mechanics one. The physics side won.”

Mazilu added, “If you wanted to learn about the soul of W&L, you took a leisurely walk around campus with Tom. Past the Leyburn and Science libraries, he would have told you about how proud he was of the expansive book collections, his love of literature and writing, about Jorge Luis Borges and Flannery O’Connor. And if you wanted to hear Tom brag, you would have come to Howe (and Why) Hall. He would have enthusiastically told you about his wonderful colleagues — ‘good, smart people’ — and their accomplishments, and his great students. And if you were lucky, maybe you would have caught a glimpse of Tom in front of the white board, writing his beloved equations in happy shades of red and green. To use the physicist Richard Feynman’s words, ‘the pleasure of finding things out’ was at the very core of Tom’s life.”

Williams was a member of the Fortnightly Club in Lexington, a group that gathered monthly to present and discuss thought-provoking research projects, current events and personal stories. One of his presentations covered the history of the oyster industry at Deep Creek. He volunteered for Meals for Shut-Ins for many years and enjoyed visiting the homebound and sharing their stories. Williams created an emergency supply kit to ensure their basic needs were covered during inclement weather.

A memorial service will be held Friday, Feb. 8 at Kendal in the Anderson Center at 2 p.m. In lieu of flowers, the family requests that donations be made to Meals for Shut-Ins, P.O. Box 581, Lexington, VA 24450.