Also honored during the event was long-time law school employee Darlene Moore, who earlier this year retired from her position as secretary to the Law Council, the governing board of the Law Alumni Association.

After graduating from W&L, Vardaman attended law school at Harvard and then clerked for U.S. Supreme Court Justice Hugo Black. He practiced law at Williams & Connolly for over 40 years, with extensive experience in complex civil and criminal litigation. He has argued before the U.S. Supreme Court on several occasions and before state and federal courts throughout the U.S.

Vardaman devoted himself to his alma mater, serving on reunion committees, search committees, and campaign cabinets. Most recently, he served as the chair of the Law Committee of the W&L Board of Trustees. He lectures on his professional experiences each year at the law school and serves as mentor to students as they embark on their careers. As a part of his gift in honor of his 50th college reunion, Vardaman endowed a scholarship in the law school.

Darlene Moore has been a member of the staff at the law school for 39 years. Hired in 1975 as a secretary in the word processing center, Darlene served as secretary to Dean Roy Steinheimer until assuming the duties of director of faculty services, where she managed the department providing support to the faculty in their academic and scholarly endeavors. In addition, she served tirelessly as the executive secretary of the Law Alumni Association for 34 years until her retirement from that position in April of this year.

Darlene was the first recipient of the John and Ruth Huss Award in 2003, in recognition of her “exemplary and dedicated service” to the law school. Recently, an anonymous donor chose to honor Darlene and her work ethic by creating the Darlene T. Moore Law Scholarship to provide financial aid to a worthy law student. 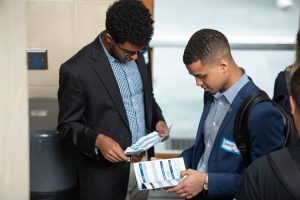