U.S. Marine Liaison to Japan Self Defense Forces to Speak 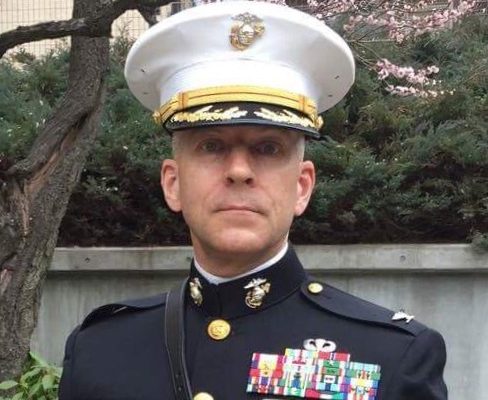 Colonel Chris Goff, U.S. Marine liaison to the Japan Self Defense Forces, will give a talk at Washington and Lee University on March 28 at 7 p.m. in the atrium of the Ruscio Center for Global Learning at W&L.

“Since the end of the World War II, the U.S.-Japan Alliance has underwritten the postwar Rules Based International System (RBIS) in the Indo-Asia-Pacific Region,” Goff said. “Both this system and the Alliance are facing unprecedented pressures and challenges from China, an unpredictable North Korea and a declining Russia in what was once projected to be the Asian Century.

“As the largest and most dynamic region in the world, the Indo-Asia-Pacific Region continues to hold both opportunities and security challenges for the Alliance. Understanding Japan and the Alliance has never been more important for America than today. A vital question we must answer is: Are the U.S. and Japan capable of continuing to be effective in the region and maintaining security and stability in the years to come?”

Goff, a 1988 graduate of the Virginia Military Institute, he is also a graduate of military courses and colleges including the U.S. Army’s Infantry Mortar Leader Course, Airborne School, the Japan Ground Self Defense Force (JGSDF) Command and General Staff College and the Japan Ministry of Defense National Institute for Defense Studies.

He served in the Persian Gulf War and was selected to become the Marine Corps’ first Japan, North-East Asia Foreign Area Officer in 1989. Joining the U.S. Pacific Command in 2010, Goff served as chief, Southeast Asia policy division and chief of strategic plans.

Goff assumed his current position as the Marine Forces Pacific liaison officer to the JGSDF in 2013. He most recently served as director of operations, CJ-3, for Operation Inherent Resolve, Iraq, from June to December 2016.

Personal awards include the Defense Superior Service Medal; Bronze Star Medal; the Taiwan Badge of Honor, awarded by the Taiwan Minister of Defense; and the Combat Action Ribbon with gold star.