U.S. Senators Respond to a Case in W&L Law’s Immigrant Rights Clinic Kevin Euceda, a Honduran immigrant seeking safety from persecution in the United States, saw confidential therapy notes used against him in court. Now, legislation has been introduced to stop the practice.

It was an article in The Washington Post that attracted their attention in the first place.

Work by W&L Law student attorneys to win Honduran immigrant Kevin Euceda asylum has been quiet yet doggedly persistent—spanning three years—but their efforts were made public in mid-February after a reporter contacted the Capital Area Immigrant Rights (CAIR) Coalition in search of examples of a particular kind of practice.

Through Euceda’s story, Washington Post reporter Hannah Dreier revealed that confidential notes, taken during mandatory therapy sessions with unaccompanied minors, were being handed over to ICE and used against immigrant youth in removal proceedings.

In response to the article, which stunned therapists, lawmakers, and citizens alike, legislation was introduced last Wednesday to stop ICE from engaging in the practice.

“This practice suggests that ORR [the Office of Refugee Resettlement] is not providing adequate care for minors in its custody,” the March 3 letter from the above United States Senators to Jonathan H. Hayes, Director of the Office of Refugee Resettlement, reads. Additional senators that signed the letter include Edward Markey, Richard Blumenthal, Jacky Rosen, Chris Van Hollen, Jeffery A. Merkley, Robert P. Casey, and Tina Smith.

Euceda’s confidential notes in the hands of ICE officials may cost him asylum. As a former prisoner of the gang MS-13 who risked his life to escape, Euceda’s deportation would mean almost certain death.

“Astonishingly, ICE continued to selectively present—and arguably distort—information from the child’s psychotherapy sessions to pursue deportation, even after the government certified the individual in question as a victim of severe human trafficking eligible for humanitarian protection,” the letter reads.

After living in Guatemala for a few years, Euceda and his sister returned to Honduras, to their deceased grandmother’s shack, only to find that it had been taken over by the notoriously violent gang MS-13. Euceda was twelve at the time. Intimidated and no doubt fearing for his life, he stayed at the house while gang members slept in his bed, and tortured rivals on the patio. Soon, they forced Euceda to sell drugs.

When MS-13 ordered him to kill someone for proof of loyalty, under threat of death, Euceda and his sister (then 17 and 18, respectively) fled.

They traveled for three months, crossing the Rio Grande on an inflatable raft before being discovered by the U.S. Border Patrol. His sister was deported, but Euceda was a minor, so he was transferred to ORR, which is responsible for the custody of immigrant children.

Euceda told the story of his life to therapists at the border, and then he was moved to Shenandoah Valley Juvenile Center in Staunton (a maximum security facility) as a consequence. In 2017, a new policy was introduced to move those who self-disclosed gang ties to secure detention facilities. In 2018, the ORR “went a step further and entered into a formal Memorandum of Agreement with ICE to share details about children in its care” –if a minor mentioned connections with gangs and drug dealings, therapists had to file a report within four hours, and those reports would reach ICE in one day. That’s according to The Washington Post.

So Euceda’s admissions in private therapy sessions ended up in the mouths of lawyers for the Department of Homeland Security, who argued that he did not deserve to stay due to gang involvement. 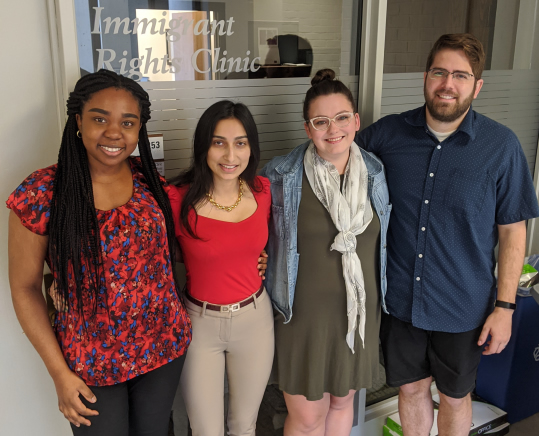 The previous student caseworkers, who have by now graduated, successfully advocated for Euceda to get out on bond, but the Department of Homeland Security (DHS) regularly exercises its authority to unilaterally overrule orders by immigration judges to release individuals on bond. While Kevin remained in detention, the Board of Immigration Appeals (BIA) ultimately decided to overrule the judge and deny the bond. Almost the same thing happened with Euceda’s asylum hearings. The judge granted Euceda asylum, DHS appealed it up to the BIA, and the BIA remanded it down to the judge.

Resek and Baer got the case at that point so, at the end of October 2019, they submitted a new brief with additional findings.

During a subsequent September bond hearing, argued by student caseworkers Diana Oladetimi and Shahana Farishta, the judge again granted Euceda bond, and DHS again unilaterally overruled the immigration judge. The BIA again denied Euceda bond on appeal—all based on information contained in the therapists’ notes that the judge had discounted after hearing direct testimony from Euceda.

After reviewing the October 2019 brief submitted by Baer and Resek, the immigration judge made another decision about Euceda’s case.

The result was that instead of asylum Euceda was granted protection under the Convention Against Torture, or “CAT-Deferral,” under which there is no path to citizenship, and you can still be detained.

“It’s like the least of the least protections,” Resek explained. “So the judge basically said that her hands are tied right now, she wants to give him asylum, but the BIA has been clear that she can’t. So until things change, she has to follow the BIA’s reasoning.”

“And now DHS is saying they want to appeal that decision,” Baer said, “even though it’s the most minor of protections.”

Since The Washington Post article, published on Feb. 15, there has been an outpouring of public support. Resek reported getting over 300 emails, many from therapists and a good portion from ordinary people.

A lot of people asked to write to Euceda directly, and many asked to donate. Resek and Baer set up and now manage a GoFundMe for Euceda, which will help him when he gets out—whether he emerges from detention to meet a new life in the United States, or a life on the run in Honduras.

Winning at the BIA level will be tough, but Baer and Resek have hope about their chances at the United States of Appeals for the Fourth Circuit if the BIA again refuses to uphold minimal protection for Euceda. The student attorneys predicted that a resolution at the Fourth Circuit could take up to a year and a half, if the client is willing to wait that long.

In the meantime, there are new opportunities to pursue Euceda’s release from detention. These paths could come to a resolution before Baer and Resek, 3Ls, graduate in May.

But it’s hard to keep asking their client to hang in there, Resek and Baer said.

“He’s coming from an upbringing where he was the prisoner of a gang, and now in the country where he seeks protection, he’s saying, ‘I’m not a gang member, that’s why I left,’ and they’re saying, ‘no, no, no, you are a gang member, and we’re going to detain you here’. So his whole life he’s lived with restrictions to his liberty, [and] for us to ask him to further restrict his liberty, just a little bit longer, it gets harder every time.”

However, this show of public support, and attention from elected officials, has given Euceda the hope he needs to continue pursuing refugee protection.