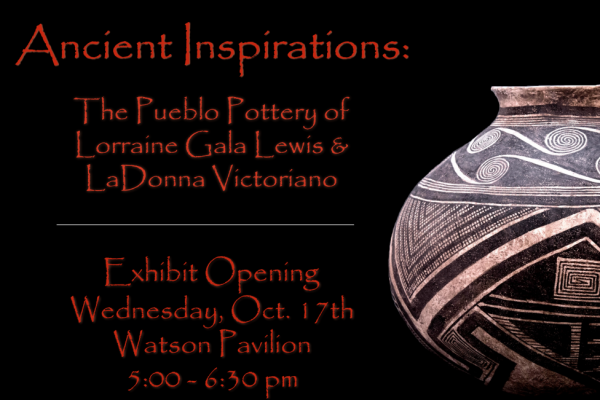 Washington and Lee University will host a public opening reception for “Ancient Inspirations: The Pueblo Pottery of Lorraine Gala Lewis and LaDonna Victoriano,” on Oct. 17, at 5 p.m. in the Watson Pavilion on the W&L campus. Both Lewis and Victoriano will be at the reception for an artist talk and to answer questions about their work.

This exhibit, which is free and open to the public, focuses on the work of two contemporary Native American potters from the Southwest, Lorraine Gala Lewis and LaDonna Victoriano. The artists have lent some of the pieces, and others are from the collection of Joel Bernstein ’57.

“This is the first time that Native American ceramics have been exhibited at the Reeves, and this gives our students and visitors an introduction to the culture, the ceramics and the potters of the pueblos of the American Southwest,” said Ron Fuchs, curator of the Reeves Collection.

The opening is sponsored by University Collections of Art and History at W&L. 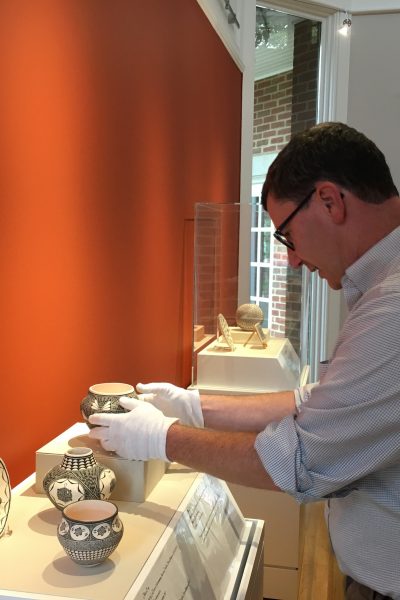 When Joel Bernstein visited campus in March 2017, he toured the Watson Pavillion with Washington and Lee’s Reeves Collection Curator Ron Fuchs (pictured above). Little did anyone know that this visit would lead to an upcoming exhibit featuring contemporary Native American pottery. During the tour, Bernstein shared that he collects Native American pottery, and after learning that there had not been a Native American exhibit in recent history, he offered to loan pieces from his collection as well as connect Fuchs with two Native American potters from the Southwest. “This exhibit would not be happening without Joel’s generosity and involvement,” Fuchs said.

Bernstein also established a generous scholarship endowment at Washington and Lee with a preference to support underrepresented populations on campus. The Gail S. and Joel H. Bernstein ’57 Scholarship will be awarded for the first time next fall.

Once Bernstein connected with potters Lorraine Gala Lewis and LaDonna Victoriano, they decided to add to the exhibit some pieces of their own. Southwestern Native American potting is traditionally a women-centered art form, a fact that student co-curator Julie Malone found especially compelling, according to Fuchs. The potters achieve the careful detailing on each piece with a special brush made from the yucca plant.

The exhibit opens with a reception welcoming the public on October 17 at 5 p.m. and remains on display through December. Bernstein, Lewis and Victoriano will be in attendance, with the artists providing an overview of their work.