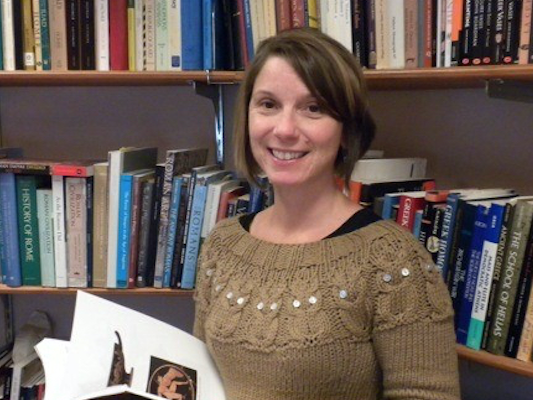 Kathleen Lynch, associate professor of classics at the University of Cincinnati, will give the 2016-2017 Hoyt Lecture at Washington and Lee University on March 7 at 7 p.m. in Staniar Art Gallery, Wilson Hall.

She will be speaking on “The ‘End’ of the Greek Symposium?” The talk is free and open to the public. Her talk is sponsored by the Classics Hoyt Fund and the Department of Classics.

Lynch is a classical archaeologist, with a focus on ancient Greek ceramics. Having worked on archaeological projects at sites in Turkey (Gordion, Troy), Greece (Athenian Agora, Corinth, Pylos), Italy (Morgantina) and Albania (Apollonia), her research considers what ancient ceramics can tell us about their use and users.

Athenian figure-decorated pottery from Athens is her specialty, and her recent book, “The Symposium in Context” (2011), won the Archaeological Institute of America’s (AIA) 2013 James R. Wiseman Award for best publication in archaeology. The book explores the kitchen cupboards of an archaic Athenian house.

Lynch co-edited “The People of Apulia: New Evidence from Pottery for Workshops, Markets and Customs” (2014); “Drinking Cups and the Symposium at Athens in the Archaic and Classical Periods” (2014), which appeared in “Cities Called Athens”; and “Trade of Athenian Figured Pottery and the Effects of Connectivity” (2014), was in “Athenian Potters and Painters III.”

She has lectured on four AIA-sponsored cruises. Some of the topics she addressed during her Black Sea cruise include Greek colonies in the Black Sea, the Jason and the Argonauts myth and ancient views of Eastern barbarians.