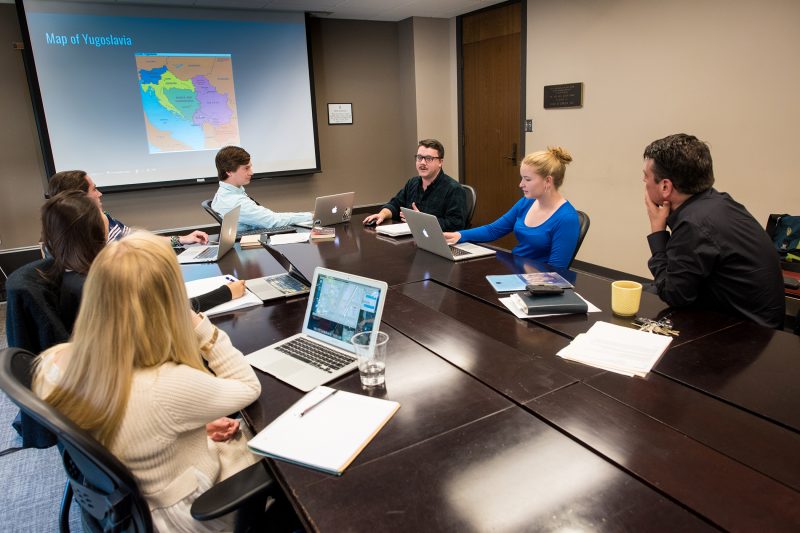 What’s the focus of your class?
The class examines two basic questions: What possibilities does law offer after massive political violence has occurred, and what are the limits of law after massive political violence? This class constitutes an opportunity for students to think diversely and honestly about what political transition from terrible violence requires, and to take a second look at a lot of our orthodoxies of how we think the world works. We grapple with tough questions about imperfect victims, tragic perpetrators and the ordinary person. Individuals commit the acts that cumulatively lead to mass atrocity, but the connived nature of the violence implicates questions of collective responsibility. While our instinct may be to prosecute guilty individuals, are other responses more appropriate? What do victims and their families want? What is a suitable punishment? One of the shortcomings of criminal law is that it scapegoats a small number of people and sentences them, and everyone else gets a free pass. But on the other hand, if you punish everyone, then you take away everyone’s humanity, and you end up with a Treaty of Versailles situation.

The material is emotionally heavy, but also luminous because it unpacks the resiliency of the human condition and human capacity for mercy and growth in the face of terrible violence. Those are themes I try to emphasize. Another core theme is gender and identity. It is impossible to disentangle mass violence (and transitional justice) from gender, women’s social inequalities, constructs of masculinity and femininity (and of child and adult), nationalism, race and sexual identity.

What are you enjoying most about teaching the class?
I’ve taught this class at the W&L Law School, as well as at law schools throughout Europe, Canada and Australia. I’m really enjoying the ability to talk about issues of justice without the architecture of law always cabining us, as you would have with law students. I do set out the definitions of international law and the definitions of international crimes for context, but we’re having very vivid discussions exploring the limits to law and the saliency of other methods of justice. We’re also thinking about the limits to human rights and the power of storytelling. Just because one might know a lot about abstract human rights doesn’t mean one necessarily appreciates the real life of human beings.