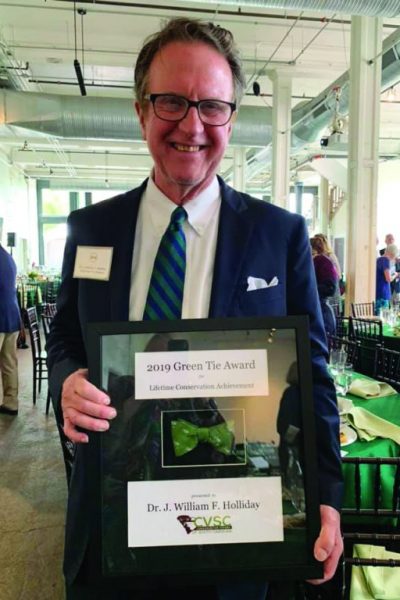 “We can’t forget that land isn’t just for people. We have to remember that land is for all species and we need to protect it.”

Although he majored in English at W&L, Bill Holliday ’65 did take one business course, a popular economics class taught by John Gunn ’45. His takeaway was Gunn’s assertion that if “right to”  is included in the name of legislation, you can bet it’s about giving rich people control and money.

As a farmer, conservationist, animal rights advocate and an appointed member of the Agriculture Commission of South Carolina, Holliday immediately saw a red flag when he learned in the spring of 1995 that the state legislature was quietly considering a “right to farm” bill. He was horrified that the bill would open the door to large corporate hog operations like those that had proliferated in eastern North Carolina. Furthermore, it would limit the right of local governments to pass ordinances regulating hog farm operations and the rights of citizens to sue for damages from contamination.

Environmental Impact
Holliday, whose family has been farming in the Galivants Ferry area of Horry County in the northeastern corner of South Carolina for generations, immediately called Jane Lareau, co-founder of the Coastal Conservation League. The league mobilized a massive lobbying campaign not only to kill the existing bill, which had already progressed to the senate, but to draft an alternative bill that would place controls on confined animal feeding operations.

“It was the first time the league ventured out of Charleston and became a statewide organization,” Holliday recalled. “They were most effective lobbyists.” Holliday himself was in a delicate position. All but one of his fellow agriculture commissioners, the elected state agriculture commissioner and the governor were pressing for passage of the legislation. He did eventually come out publicly against the bill, which did not endear him to his colleagues.

Defending the Community
In the meantime, nature intervened in June 1995 when a ruptured dike holding back a waste pit on a farm in eastern North Carolina caused mass dumping of hog waste into the New River, dramatically demonstrating the potential environmental impact of unregulated corporate hog operations.

The lobbying efforts and subsequent intense statewide media scrutiny helped the bill’s opponents negotiate to postpone a vote on the bill for a year. They used that time to lobby for a replacement bill that included strict limitations on corporate hog farming. It was an uphill battle against intense counter-lobbying by industry interests. The long struggle was dubbed “the hog wars.”

The new bill and associated regulations that passed in June 1996 established the toughest rules in the nation for factory farm animals.

Among other things, it prohibited discharges into waterways that supplied drinking water, required secure liners for waste lagoons and set strict setbacks from neighboring property and waterways. The struggle did not end there, as there were later efforts to overturn or weaken the legislation, but Holliday and other conservation activists were able to stave them off.

Accolades
For his efforts in fighting the hog wars, Holliday received the Lifetime Conservation Achievement Award from the Conservation Voters of South Carolina last year.

Although he considers his work in defeating the “right to farm” legislation his most important contribution as an agriculture commissioner, Holliday also has been recognized for his efforts to protect his family’s land under conservation easements in the Galivants Ferry area of Horry County and in neighboring Marion County across the Little Pee Dee Swamp.

Holliday summed up his commitment to the environment by amending the ending of an old Woody Guthrie song. “There is a refrain that goes, ‘This land belongs to you and me,’ and I changed it to ‘This land belongs to all that lives.’ I changed it because we can’t forget that land isn’t just for people. We have to remember that land is for all species and we need to protect it.”

Stumping for Votes
Holliday’s family organizes the Galivants Ferry Stump, a biennial event where Democratic office-seekers mingle with voters to campaign and eat a South Carolina specialty called chicken bog. The tradition began in 1876, and Holliday’s family took over hosting in 1912. Traditionally a forum for South Carolina office seekers, the event welcomed presidential candidates for the first time last fall.

Continuing Education
He earned a doctorate in religious studies from The Union Graduate School in 1999, focusing on ecology, depth psychology and the new cosmology, with an emphasis on interspecies relationships.