Washington and Lee Alumnus Tom Wolfe ’51 Dies at 88 Wolfe, one of W&L's most accomplished alumni, will be remembered for his talent, wit and generosity. 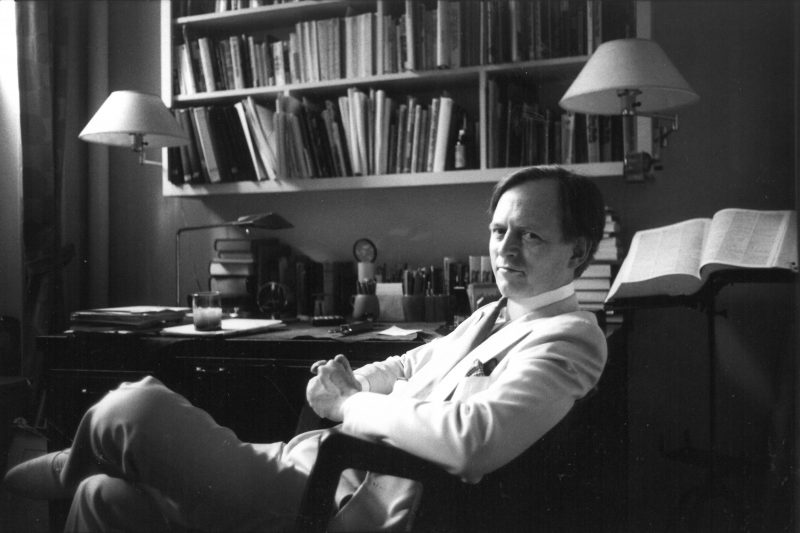 Celebrated author and journalist Thomas Kennerly Wolfe Jr., a 1951 graduate of Washington and Lee University, died Monday, May 14, 2018, in New York City. He was 88.

“He was one of our most accomplished alumni,” said W&L President Will Dudley. “Over the years, he generously served his alma mater as a member of the Board of Trustees from 1984 -1994, as a class reunion committee member and as a member of the university’s commission for its 250th observance. As a journalist and author, he was a master of the New Journalism genre, and he graciously offered W&L students writing advice whenever they contacted him.”

“Tom Wolfe made us proud to be alumni of Washington and Lee University,” said former W&L President Ken Ruscio ’76. “Bright, independent, original, influential and a keen observer of the world around him, he inspired so many of us. He was a nontraditional traditionalist, a gracious gentleman in every sense but not afraid to question, challenge and redefine conventional thinking.”

In his 50th Reunion Calyx, he lightheartedly re-introduced himself to his classmates in the third person: “When Thomas K. Wolfe, Jr., arrived at Washington and Lee in the fall of 1947, he didn’t drink, didn’t smoke, didn’t consume caffeine in any form, didn’t curse, didn’t go by the name Thomas or Tom or Tommy but, rather, ‘T.K.’, wore a fedora if it seemed at all chilly out, carried an umbrella if it looked the least bit like rain, and had never worn a jacket and tie except to church or the random wedding or funeral.”

After graduation, Wolfe attended Yale University’s American studies program, receiving his Ph.D. in 1957. His career as a journalist included stints with The Springfield Union, The Washington Post, The (New York) Herald Tribune and New York Magazine. As a leading novelist and commentator on key decades of recent life in America, Wolfe was the first writer to publish the phrase “good ol’ boy,” and has been credited with coining “the right stuff,” “the Me Decade” and “radical chic.”

Over the years, Wolfe remained in close contact with W&L, and his visits always caused a stir. “Resplendent in his white suit, he would stroll across the lawns, meet with students and faculty, and dazzle with his smile, humor and wit,” said Provost Marc Conner. “I always found him an exceptionally gracious and encouraging figure, and I feel very fortunate to have been able to get to know him at least somewhat over the last 10 years.”

According to Conner, Wolfe chose W&L over the Ivy Leagues, “seeking an immersion in the American South of his birth and studying under key faculty such as Marshall Fishwick. He then went on to do graduate work in the new discipline of American studies, helping to blaze the trail for comparative, interdisciplinary, investigative work. The ‘new journalism’ style he helped create was liberating and fit into the radical modes of the 1960s, even though Wolfe used that style to satirize many favored causes of the left, such as the Black Panthers and the counterculture. When he turned to fiction with the enormously successful novel ‘Bonfire of the Vanities’ in the 1980s, he sought to write in the style of Dickens and Zola, bringing an investigator’s eye to the lived social world and trying to make sense of the bizarre world of late 20th-century America.”

Conner added, “He was, of course, that most American of contradictions: in some ways deeply conservative in his satire, particularly his delight in poking fun at the pretensions of the radical left; and yet the man was a revolutionary in so many ways, democratizing the form of the novel, treating regular people and issues with the regard of high literature, and bringing the journalist’s eye and instinct to the literary trade.”

In 1974, W&L awarded Wolfe with an honorary degree, and in 1999, he was inducted into ODK. In 2001, his classmates created the Tom Wolfe Seminar to honor his work and to focus lectures and discussion upon other great American writers who shared Tom’s interest in American studies and popular American culture.

In the Reunion Calyx, Wolfe joked about the honor bestowed upon him: “Many American writers rise at dawn throughout the month of April, waiting for the telephone call from Sweden, which always comes at some ungodly early hour, informing them that they have won the Nobel Prize. Wolfe gazes down upon them all from a higher peak. His mates in the Class of 1951 established Washington & Lee’s Wolfe Lecture Series eight years ago. Ever since then he has felt delightfully and proudly posthumous.”

Rob Fure, director of Lifelong Learning at W&L, said Wolfe and his wife, Sheila, “would come to Lexington for the weekend seminar whenever they could, often at his own expense, to introduce the writer to our audiences. In these visits, he was unfailingly kind in his remarks about the writer’s work and to members of the audience, patiently signing copies of his books with the distinctive flourish of his autograph.”

In recent years a debilitating spinal condition made Wolfe’s progress across campus difficult. “The pain and his frustration over his balance never showed on his face,” said Fure. “He engaged everyone who greeted him, directing the conversation toward the one he met. He was an extraordinarily talented writer, one well known for his penetrating wit, his fascination with evolving social conventions, and his bemused regard of the folly of pretense and preoccupation with status.

“I was especially fond of his friendship and his benign support of our management of the program in his name,” said Fure. “I’ll remember always one of his nuggets of popular discourse, which he used to send my way with a grin: ‘Keep ‘em flyin’.’ I will cherish that as his benediction.”

Wolfe is survived by his wife, Sheila, daughter Alexandra, and son Thomas Roberdeau.

These are just a few of the articles and news obituaries published on the occasion of Tom Wolfe’s death:

The Washington Post, “Tom Wolfe, apostle of ‘New Journalism’ who captured extravagance of his times, dies at 88”

Wall Street Journal, “Tom Wolfe, Author of ‘Bonfire of the Vanities’ and Best-selling Creator of New Journalism, Dies at 88”

Vogue, “Tom Wolfe, Pioneer of New Journalism and Chronicler of American Indulgence, Is Dead at 88”