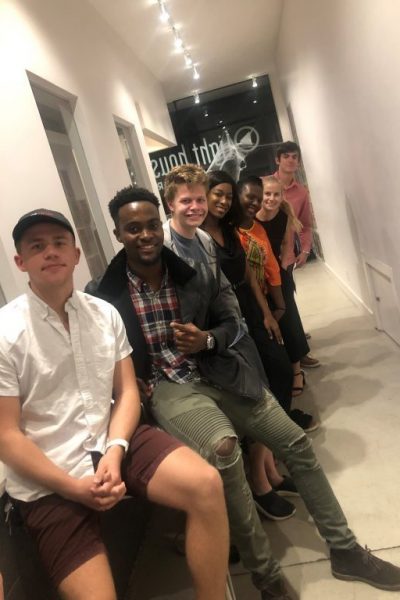 Ramonah Gibson ’20, Leah Jackson ’22 and Nolan Zunk ’22, representing Washington and Lee University, won the Mentor Award for their work this month at the Adrenaline Film Project in Charlottesville, Virginia. The competition, which is held annually by Light House Studios, challenges teams to write, cast, shoot and edit a film in just 72 hours.

“The team was stunning,” said the team’s mentor, Assistant Professor of Theater, Dance and Film Studies Stephanie Sandburg. “I’m so proud of them! We had the most diverse team and the hardest genre, and they rocked out a great five-minute film.”

For the project, each team was given a genre, prop and line that they are required to use in their film. The W&L team was given the horror genre, a blue plastic ball and the line “You’re back in business.”  Their completed film is called “Hand Off.”

“The most challenging thing about working on this project was the genre,” said Jackson. “Many filmmakers can make a scene scary, but we wanted to have a story, a character development and a message for our audience. Our mentors challenged us to meet their vision, and we worked closely with them to accomplish this.”

Their story was about a woman named Selina who is struggling with financial troubles. She recruits her partner, Steven, to steal in order to make ends meet. One day, she hears of a priceless artifact that she believes will end her financial problems. She and Steven steal the artifact, but they then realize that it is more trouble than it is worth.

“The Mentor Award is given to the team that best embodies the spirit of the Adrenaline Project, takes it seriously and produces a quality film,” Sandburg said. “The mentors decide this together, and it was a consensus among them that our team was outstanding.”

“Winning felt amazing,” said Gibson. “W&L doesn’t have many academic film production courses. There were teams with professionals and teams with students that had cinematography classes. To be able to still win without that experience was extremely validating—especially as a senior about to try to make my way into the film industry.”

The film was screened during the Virginia Film Festival, which took place Oct. 23-27. The film is also available to access free online here.