What a Trip For many students at Washington and Lee, the Outing Club is about more than outdoor adventure — it’s about finding a place that feels a little bit like home. 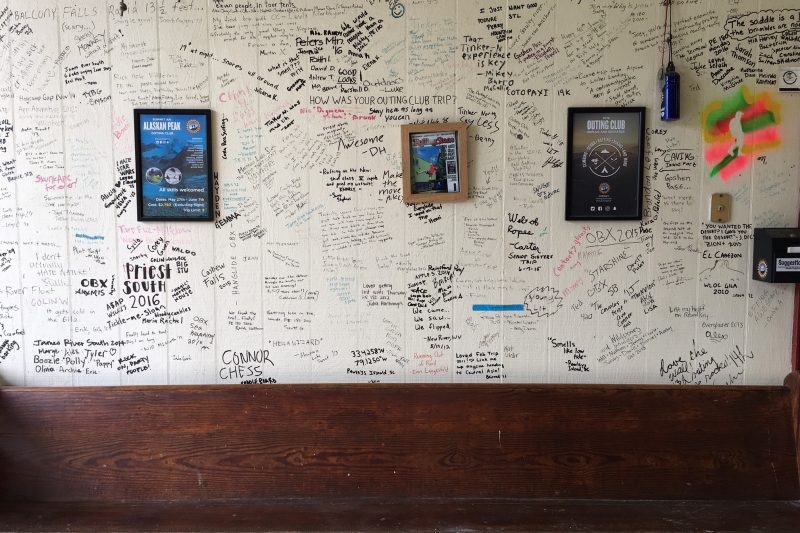 This wall inside the Outing Club barn at W&l serves as a memory board for students and alumni who have explored the outdoors with the club.

Inside the Outing Club barn at Washington and Lee stands a wall that has, for many students, become a rite of passage.

It isn’t the popular climbing wall; instead, this is a long expanse of white wall inked with the kinds of inside jokes and memories that are born when people forge friendships through daylong hikes or overnight adventures.

“We found the trail … finally!”

The wall, which is now more black, blue and red than white, is a perfect illustration of how the Outing Club has evolved since it was formed decades ago. What started with a few outdoorsy students and a couple of backpacks is now a rich, multilayered community that enfolds students of all backgrounds, interests and personalities.

Membership in the club comprises more than 50 percent of the student body. Whether they are male or female, Greek or independent, left-brained or right-brained, these students share at least one passion:  the Outing Club.

“The Outing Club can serve students in whatever way fits them, whether it’s a way to push their boundaries, relieve stress, get off campus, or meet new people,” said Diana Banks ’17, a member of the Outing Club Key Staff. “It puts students together in an environment that’s entirely outside of the academic world, and erases all of the usual social constructs that keep people from trying things they want to try or saying things they want to say. It makes it easy to just have a good time.”

James Dick, director of outdoor education at W&L, traces the Outing Club’s roots back to an informal group of outdoor enthusiasts who loosely organized themselves in the ’60s or ’70s. In the late ’80s, Kirk Follo (now a W&L instructor emeritus of German and Italian) became the Outing Club adviser and shepherded the program for many years. Nick Tatar ’96 was the first Outing Club director, serving in that role from 1997 until 2002, when Dick came on board. 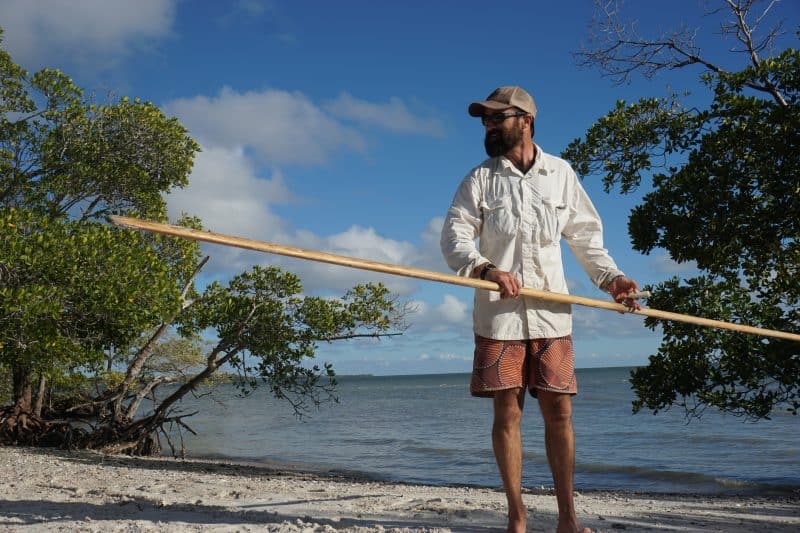 In the late ’90s, the Outing Club House, located in Davidson Park, became a residential option for students. For several years, the club stored its gear in the basement and the attic — until it came time to install a sprinkler system, and the fire marshal said the clutter had to go. Fortunately, by then Washington and Lee had acquired the Peniel Farm, west of town on Route 60, which included a large horse barn. The Outing Club moved the gear to what members affectionately call “the OC barn,” and the combination of ample space and a secluded location fueled interest in the club. The Outing Club House still exists as a residential option.

Five years later, the stalls of the red OC barn are stuffed not with horses and hay, but with all manner of outdoor adventure equipment — stand-up paddleboards, canoes and kayaks, whitewater rafts, paddles and life vests, tents, climbing gear, campfire cooking equipment, and much more. One stall is home to the Blue Bike shop, which is run by two student employees. Through that program, members of the campus community can borrow bikes to get around campus and town. The barn also has a full workshop for repairs and building projects.

With help from Outing Club members, Dick used that workshop to build a new climbing wall inside the barn. At 500 square feet, the wall is many times larger than the small bouldering wall once located in the basement of the OC House. The climbing wall, which has been extended several times with help from university carpenters, is used for practice by the Crux Climbing Team. Dick, who teaches several PE classes each term, also uses it to teach climbing techniques, and there are open climbing hours.

Folks off campus have recently begun to take note of Washington and Lee’s outdoor offerings. The university is regularly listed among the Best Adventure Campuses in Blue Ridge Outdoors magazine, and was recently named one of 10 Best Colleges for People Who Love the Great Outdoors by Money magazine. Those plaudits owe to its proximity to the George Washington and Jefferson national forests, the Blue Ridge Mountains, and natural attractions such as the Blue Ridge Parkway and Appalachian Trail, as well as to the eight-mile network of on-campus trails.

Another big factor is the Outing Club itself. If a student wants to kayak down the Maury River, paddleboard on Carvins Cove near Roanoke, or go backpacking on the Appalachian Trail, they need only pay the $40 fee, which covers all four years at W&L, then visit the OC barn to check out the equipment. Faculty and staff don’t have to pay the fee.

Prior to the beginning of each academic year, the Outing Club offers what is hands-down the most popular pre-orientation trip for first-year students, Appalachian Adventure. It is a weeklong trek on the Appalachian Trail that is led by upper-division students. The trip is so popular, in fact, that this August there will be 18 different groups and nearly 200 people doing Appalachian Adventure, with experience levels ranging from beginners to experts.

Banks, who called Appalachian Adventure “the big ticket,” said, “App Adventure helps you make those easy connections with your peers and upperclassmen who already love going outside, are psyched to tell you where to go, what to do, and how to get the gear you need to make it all happen.”

During breaks, the club offers a number of other trips: whitewater rafting down the Gauley River in West Virginia, backpacking the Gila Wilderness in New Mexico, hang gliding in the Outer Banks of North Carolina, sea kayaking through the Florida Everglades, or rock climbing at Red Rocks in Nevada. Other trips allow students to go caving or scuba diving. 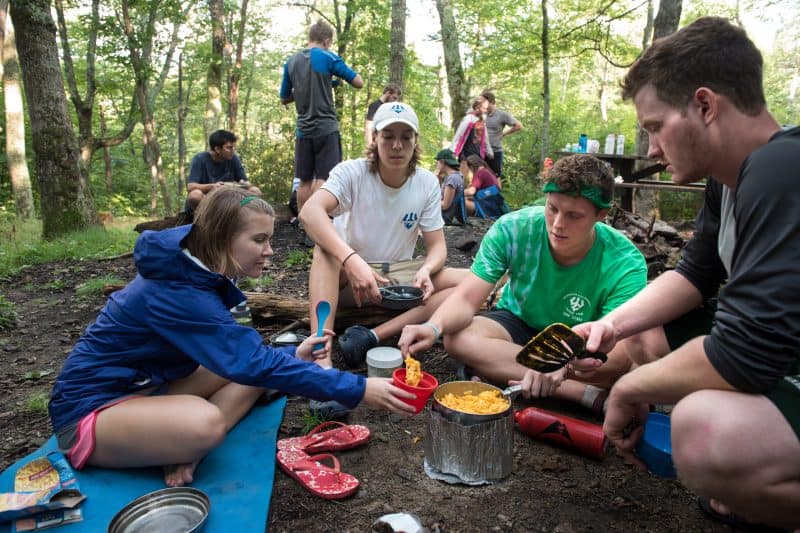 Students on the Appalachian Adventure pre-orientation trip, the most popular pre-o option for first-year students.

During the school year, students can hop an Outing Club van for a quick trip to one of the many picturesque locations within short driving distance of campus. These excursions, which have increased significantly over the past few years, include climbing, hiking, fishing, biking and paddling. Doing a sunrise hike on House Mountain is practically a necessity for any W&L student.

Dick is assisted in the OC barn by work-study students who help visitors with equipment check-outs, keep equipment clean and in good working order, and complete any other tasks their director has scribbled on the chore list for the day. It doesn’t take much coaxing, though, to get students to show up at the barn; in fact, Dick said, it is not unusual on a warm Friday or Sunday evening to find students hanging out at the barn, barbecuing on the grill and relaxing.

Lenny Enkhbold ’17 is another student who found a home with the Outing Club. A member of the Key Staff, Enkhbold says the club actually changed his whole attitude. “The OC has taught me so much about wilderness survival, how to use gear, what gear to use, how to lead, how to communicate, and all of that good stuff,” he said. “But most importantly, I’ve learned how to smile.”

Over the years, so many students have been a part of the Outing Club that it has a huge alumni fan club. Dick credits those alumni with helping to shape the club into what it is today.

“It’s all owed to their efforts,” he said. “The program they dearly loved is still crushing it!”

Although he is often teased about having the best job on campus, Dick puts in long hours. Comments like those from Banks, Enkhbold and other adoring students confirm that Dick and the Outing Club are making a big impact at W&L.

“Over the years, we have worked really hard so that it doesn’t matter who you are, there is a community of fun, zany people here,” Dick said. “I think the Outing Club connects people who would have never connected on campus and provides an anchor for some who have not found their niche. Everybody needs a community; they need to find that sense of belonging.”

Maybe that’s all best summed up in another note on the barn wall: “Stay here as long as you can.” 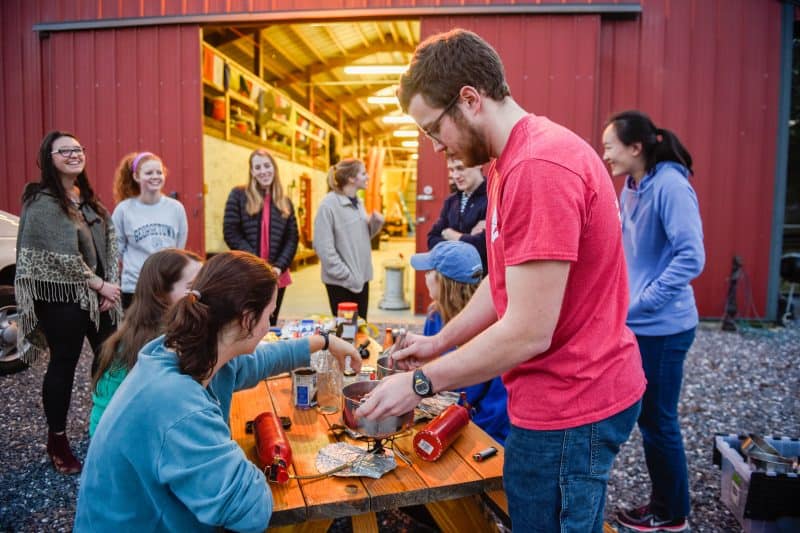 To read more about Campus Recreation opportunities at Washington and Lee, including club sports and intramurals, click here.