When History Strikes a Chord After conservation next year, the 154-year-old Stieff piano inside Lee House will be playable once more. 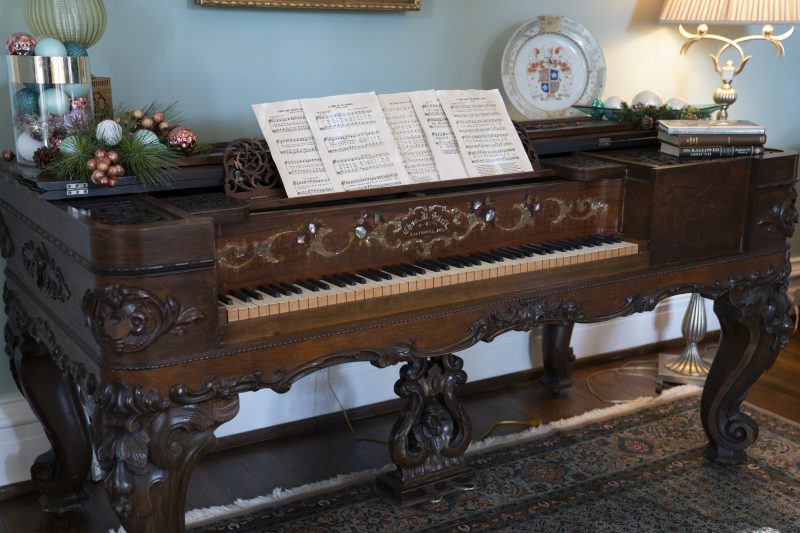 The company of Charles M. Stieff of Baltimore, Maryland, made this grand square piano-forte and delivered it to Lexington in November 1865 as a gift to the new president of Washington College. After conservation, it will be playable once more.

It is mid-December and the holidays are upon us. Lee House is decorated for the season, welcoming the entire community of students, faculty, staff and friends to various events at the president’s residence. Silver reindeer greet visitors in the hall; the dining room is full of goodies to eat and drink; and a Christmas tree stands in full glory in the parlor. In the room to the left of the front door, the Lee Room, the impressive 19th-century grand square piano holds decorations and reproduction holiday music. While it currently stands silent, this time next year, or just a little later in 2021, the piano will be fully conserved and playable once again.

The company of Charles M. Stieff of Baltimore, Maryland, made this grand square piano-forte and delivered it to Lexington in November 1865 as a gift to the new president of Washington College from “the ladies of Baltimore,” as reported in the Staunton Spectator that month. It is decorated with rosewood veneer, rippled molding and mother-of-pearl inlay with the maker’s name and an inscription “To Robert E. Lee.” It was a new “Grand Square Scale,” seven and one-third octaves, which the manufacturer advertised as the largest and “the most perfect Piano-Forte possible.”

While the piano was, indeed, a gift to the new president of Washington College, it was also a marketing tool for Frederick and Charles M. Stieff Jr., whose father had died in 1862. Post-war, the brothers searched for ways to successfully continue their business, especially in the South. At the time, they gave pianos to well-known people and, in turn, the company added their names to a list of famous Stieff piano owners.  It was a way of stimulating interest in the arts after the war years, but it was also an ingenious method of advertising. Late 1860s Stieff ads in such magazines as The Land We Love: A Monthly Magazine Devoted to Literature, Military History, and Agriculture touted the medals and awards earned by the company, as well as the latest improvements to the instrument. In an 1867 ad, improvements included “Agraffe-treble, Ivory fronts, and the improved French Action.” The advertisement also urged anyone interested in buying a piano to “send for [an] illustrated catalogue containing the names of over 1500 Southerners, 500 of whom are Virginians, 200 North Carolinians, 150 East Tennesseans, and others throughout the South, who have bought the Stieff Piano since the close of the war.” It then listed several notable Stieff piano owners in Virginia and North Carolina, including Robert E. Lee. Leyburn Library Special Collections has in its holdings a note from the Stieff Company to Lee dated November 24, 1865 thanking him for his “favorable opinion.” 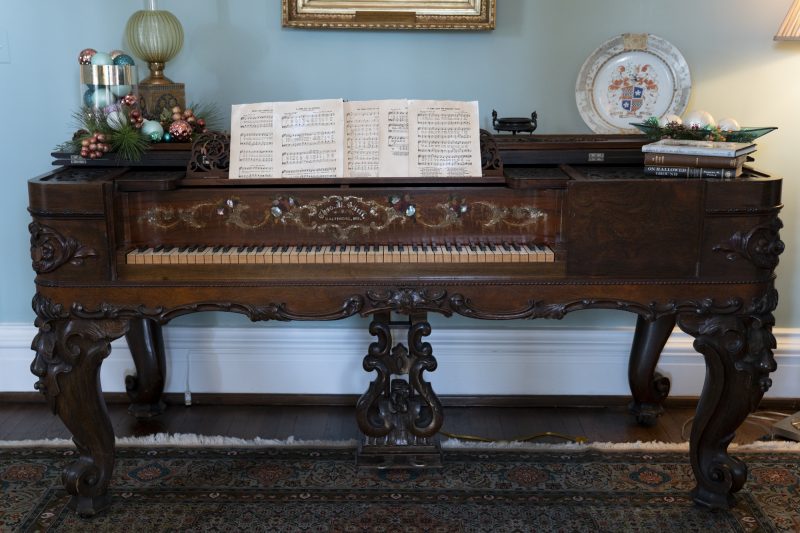 When the piano first arrived in late November, it was placed in the “old” president’s house, now the Simpson House. It sat alone in the parlor until the family moved there on December 2. Lee’s daughter Mildred was the musician in the family and probably played some seasonal music during that first month of residency on campus. The Victorian era popularized Yuletide music and other customs. Traditional hymns included “Silent Night” and “Joy to the World,” while favorite carols included “Greensleeves” and “The Holly and the Ivy.” New secular songs were also introduced in mid-century, including J. Pierpont’s 1857 “The One Horse Open Sleigh,” now known as “Jingle Bells.” Perhaps Mildred played it for the W&L students, as well as a sprightly “Up on the Housetop” that was published in 1864. Among the sheet music from that era found in the collection of the Library of Congress, Mildred could have owned titles such as “The Christmas Schottisch” by George L. Walker (1855); “The Christmas Sleigh-ride” by J. L. Hatton (1849); “Christmas Bells” by George W. Morgan (1854); and “Santa Claus’ Quadrilles” arranged by Harvey B. Dodworth (1846). “Buds and Blossoms,” a collection of sacred melodies for piano by Charles Grobe and published in 1854 by Lee and Walker, included “Adeste Fideles” along with 25 other songs.

In May 1869, the piano was moved into the new president’s house, now called Lee House. A picture taken by Lexington photographer Michael Miley during the tenure of Custis Lee’s presidency includes a glimpse of the piano in the corner of the front parlor to the right of the entrance. Although Custis and his sister Mildred left the president’s house in 1897, family portraits and the piano remained in the house until a later time. We’re not sure yet when it was moved, but the piano was in the chapel by 1904, used by students for various concerts and musicals. That March, The Ring-tum Phi reported that the piano was being returned to Baltimore to be rebuilt by the Stieff company, paid for by the Dramatic Club with proceeds from their last play. On April 9, the newspaper announced the piano had returned: “Its tones have been greatly improved and its volume fills the chapel better than before. Our musicals will hereafter not have as much difficulty in getting the piano to give forth the desired melodies.”

Inscription on the Stieff piano in Lee House

By 1929, the piano was moved to the ground floor of the chapel to be exhibited as part of the new museum. That September, a music magazine titled the Presto Times reported, “Visitors crowd about this instrument, impressed by its solidity and massiveness, and delighted by the beauty of the grain of the wood and of the floral design inlaid on the name-board with mother-of-pearl.” The square piano remained in the museum until about 1962, when it was stored along with other exhibit collections in the basement of the new freshman dormitory Graham-Lees while Lee Chapel was undergoing restoration. Although the chapel reopened in 1963 with new exhibitions, the piano apparently remained in storage and was forgotten for at least another decade. Evelyn Huntley, wife of President Robert Huntley (1968–1983) rediscovered the piano in the 1970s. She had it restored and moved back to Lee House, where it remains today.

As curator of art and history, I am responsible for the piano as a museum piece, including conducting research on it, as well as being responsible for its care and condition – and it is, indeed, in need of care at this time. Therefore, after graduation 2020, we will send the instrument to Louis Dolive, an experienced conservator and restorer of historic keyboards. Among his many projects, Dolive has worked with several organ builders, including Taylor & Boody in Staunton, and on several major conservation projects with the Instruments Lab at Colonial Williamsburg. Dolive is already familiar to the W&L Music Department as he regularly tunes their historic keyboards.

The Stieff piano will not be completely restored, as is the practice with many instruments. Because is a historical instrument, Dolive will follow the tenets of conservation, using all original parts as much as possible. Where not possible, the original elements will be saved for documentation and future study. The missing mother-of-pearl and rosewood inlays will be replaced and the piano will receive new sets of strings so that it will be playable upon its return. Perhaps next December, visitors to Lee House will once again hear the ivories tickled with seasonal melodies – perhaps even “Jingle Bells.”

Happy Holidays to all from the Museums at Washington and Lee University! 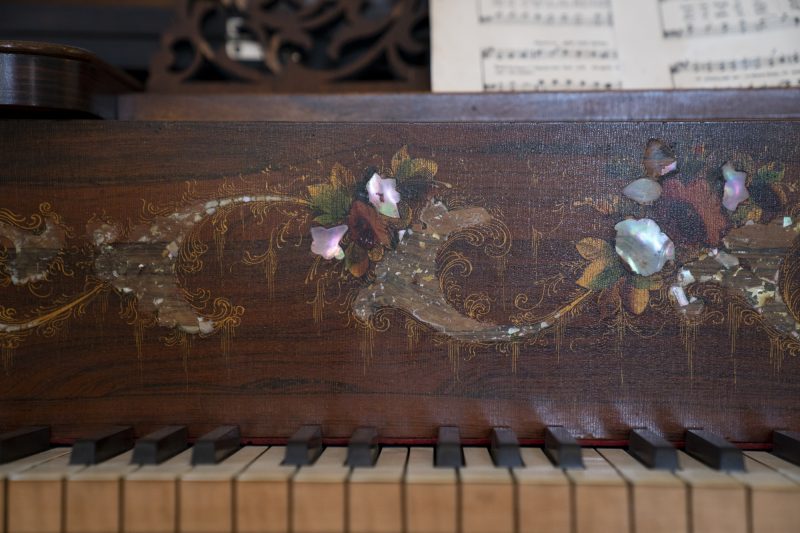 Mother-of-pearl inlay on the 1865 piano