Where Am I? This is one of the garden areas at Belfield, the former home of the late Frank Gilliam, dean of students. 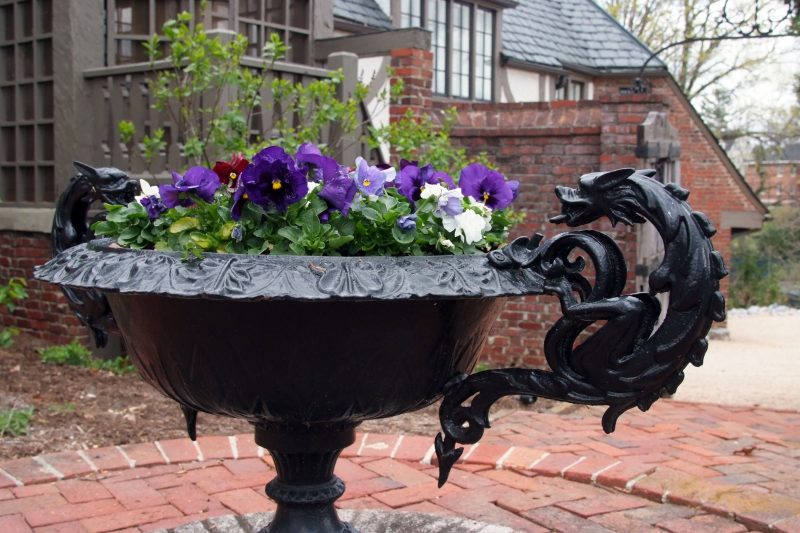 Spring flowers in bloom at Belfield.

In 2010, W&L received an anonymous gift from a former trustee to acquire and help renovate Belfield, which the university uses as a guest and event facility. Soon after, Greyson and Garland Tucker ’69 made a significant lead gift to renovate the gardens of Belfield, the former Lexington home of the late Frank J. Gilliam, the beloved dean of students.

“I was always interested in what happened to Belfield,” says Tucker. “Dean Gilliam retired in 1964, but he still had an office in Washington Hall. An aunt introduced us, and I was always in and out of his office. He and his wife, Louise, were very generous about entertaining students in their home.”

During his senior year, Tucker began dating Greyson, who was a freshman at Sweet Briar. She spent a number of dance weekends as a guest of the Gilliams. “During the first year of our courtship, we spent a lot of time at their house and in their garden. We very much enjoyed getting to know them and the history behind their garden,” says Tucker. “Often two people in their 20s aren’t that likely to become interested in gardening, but we were fascinated with how they developed the grounds, which were extraordinarily beautiful and well known throughout Virginia.”

The gardens were the work of renowned landscape architect Charles F. Gillette, who established a regional style — the Virginia Garden — that harmonized architecture with the surrounding landscape. A book about Gillette, “Genius in the Garden,” features photographs of Belfield’s gardens. Mrs. Gilliam had been president of the Garden Club of Virginia from 1948 to 1950, and in 1960 the Gilliams received the Massie Medal for horticultural achievement, the highest award given by the organization.

“We expanded our friendship in their house and garden and got married shortly before Mrs. Gilliam died,” Tucker reminisces. “Whenever we visited, we always spent time in the garden. I would say directly as a result of that experience, we too became avid gardeners.” The Tuckers’ own garden has been featured in Carolina Gardener and Southern Living magazines.”