Originally from Palm Springs, California, Michael Stinnett-Kassoff served on three deployments throughout eight years in the United States Navy as a helicopter weapons systems technician and instructor. He received his undergraduate degree from Boston University, where he majored in Political Science and International Relations and minored in History. He graduated cum laude with honors in International Relations. At W&L Law, Michael is the Executive Editor for the Journal of Civil Rights and Social Justice, a Senior Articles Editor for the German Law Journal, and implemented the new Veteran’s Law Practicum. In his spare time, Michael is a co-director of law school admissions at Service to School, a non‑profit organization that provides free assistance to military veterans and service members who are applying top universities in the U.S. 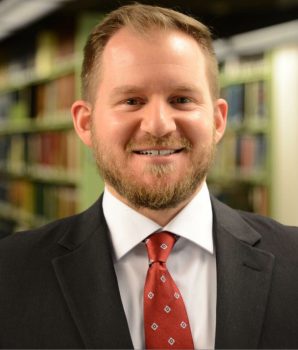 This summer I worked for the United States Department of Justice in the Antitrust Division. I worked in the New York City field office, which handles criminal antitrust matters in the northeast region.

I applied for this position through the DOJ Summer Legal Internship Program (SLIP), which is the DOJ’s only paid summer internship program for law students. It is an online application which opens at the end of July each year. I interviewed for the position on the phone sometime in late September/early October. I interviewed with two of the attorneys from the office. I was officially offered the position a few days later.

I primarily worked on a case involving the prosecution of individuals who are charged with price‑fixing in the foreign currency exchange market. This case goes to trial in early October so there was plenty to work for me. I also worked on several investigations in various industries.

I also participated in a mock jury trial, sat in on multiple witness and attorney proffers, worked on motions in limine, and attended preliminary and sentencing hearings.

I definitely honed my legal research skills, especially when navigating case law in the Second Circuit and the Southern District of New York. Naturally, my legal writing and citing improved as well. I was fortunate enough to watch experienced federal prosecutors interview witnesses. Sitting in on an eight hour witness proffer is a great way to learn the methodology used to determine whether a witness was cooperating faithfully or being less than forthcoming. After a few proffers, I was able to compare the statements of the current witness with the statements of past witnesses to determine who was cooperating and who was deflecting.

I also learned how to analyze trading data and repackage it in a way that tells a compelling story for a jury. I learned how to pick and choose defendant statements in a way that conveys the seriousness of the offense to the jury without making the prosecution seem too aggressive. There is often a fine line between the prosecution being perceived as either the good guy or a bully, especially when jurors often come to trial with a bias against the government.

I was able to rely on multiple classes during my summer with DOJ. I immediately relied upon my knowledge of the Federal Rules of Evidence, which was a reoccurring theme throughout my summer. Determining whether documents fell under a hearsay exemption or were Brady, Jenks, or Giglio material and how that impacted our discovery process was a constant task. I also relied heavily on my knowledge of the Fourth Amendment for which Criminal Procedure: Investigation was essential. Because the office is deep in trial prep, having taken Criminal Procedure: Adjudication was handy as I was fully aware of the particular stage of litigation in which we were operating and what was expected of us going forward. Because we deal with a lot of conflicts between employers and employee witnesses, I was able to tap into my knowledge of Close Business Arrangements and agency law.

Other important classes which helped were Contracts, Transnational Law, and Civil Procedure. One of the companies being investigated by us was also being investigated by at least ten other countries or European entities, so having an international proficiency was helpful. One should also have a basic understanding of Economics if they wish to work in antitrust law, whether it is the civil side or criminal.

I was surprised to see how prevalent antitrust violations are in industries in the U.S. There is often a high degree of ignorance or disregard for antitrust laws, especially in industries which use bidding processes regularly. One of the first things the office has to do when it becomes aware of antitrust violations such as bid‑rigging or price‑fixing is to determine whether certain actors in the industry deserve to be indicted and prosecuted, or whether the industry and consumers would be better served by reforming the industry without bringing a criminal case.

I was also surprised how difficult it is to explain how per se criminal violations work to average citizens on a jury and why certain actions are federal crimes. The office is often forced to consider factors that they normally need not prove as an element of the offense but that a jury needs to see in order to understand the crime and convict a defendant, such as the amount of money involved or how many alleged victims were impacted by the conduct. Despite the fact that the agreement alone is the crime, jurors need context and a story if they are to convict, even in per se cases.

My favorite general aspect of the work experience was working with such intelligent attorneys from diverse backgrounds. I was a little concerned that not having taken a class specifically on antitrust law would be an issue but the attorneys were excited and helpful in catching me up to speed so that I could provide meaningful input on cases from the outset.

My favorite specific part of the work was watching the mock trial for one of the cases. We worked with a consulting company and walked through both sides of the case in front of 60 “jurors” in downtown NYC. I was then able to watch different groups of jurors deliberate behind a one-way mirror, giving me a rare insight into how an average juror reaches a conclusion regarding a case. We were then able to apply that input to our trial strategy so that we have the best case possible when the trial starts.

I will also, of course, miss our daily lunches and conversations in the office kitchen.

This experience solidified my interest in prosecuting white collar crime and antitrust violations. I will be applying for the DOJ Honors program in the fall and hope to work as a federal prosecutor. After working in a different DOJ office last summer in DC and this office in NYC, I know I want to litigate in some capacity. Working in the Southern District of New York was a rare chance to work on a case that impacts a trillion‑dollar market and has wide-ranging implications for future antitrust prosecutions in the currency exchange market.

I will be taking classes which will polish my knowledge of prosecuting white collar crime. In the fall semester I am taking Securities Regulation, the Appellate Advocacy practicum, and the Trial Advocacy Practicum. Our trial team works intimately with the Appellate Division when it prepares for a case so that the case is winnable on appeal as well, not just at the trial stage. I am excited to factor this insight into my coursework this semester. The case on which I worked revolved around trading data and financial markets, so Securities Regulation will expand my understanding of how the federal government regulates different financial markets.