The Phi Beta Kappa chapter at Washington and Lee University will induct new members into the prestigious honor society at the Phi Beta Kappa/Society of the Cincinnati Convocation on Sunday, March 19 at 3 p.m. in Lee Chapel.

The convocation will recognize and honor 49 members of the junior and senior classes and seven graduates from the Class of 2016, all of whom were accepted into Phi Beta Kappa based on their exceptional academic achievements. It will be streamed live. 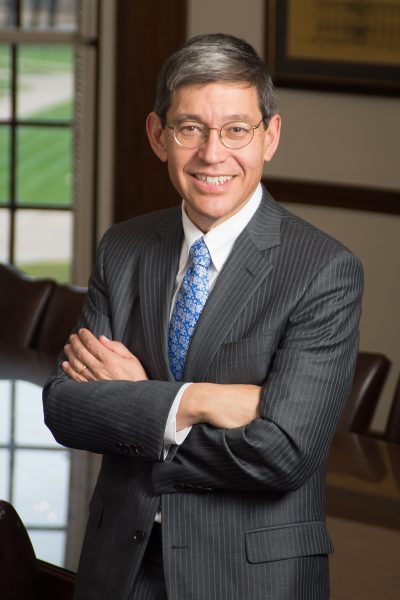 The keynote speaker will be William M. (Bill) Tsutsui, president and professor of history at Hendrix College. He will speak on “The Liberal Arts in an Age of Extremes.” The convocation is free and open to the public.

Tsutsui is an author and a specialist in modern Japanese business and economic history. Prior to joining Hendrix College in 2014 as its 11th president, he served as dean of Dedman College of Humanities and Sciences at Southern Methodist University from 2010 to 2014.

Tsutsui spent 17 years at the University of Kansas, where he served as acting director of KU’s Center for East Asian Studies, chair of the department of history, founding executive director of the Confucius Institute at KU and associate dean for international studies in the College of Liberal Arts and Sciences.

Tsutsui is the author or editor of eight books, including “Japanese Popular Culture and Globalization” (2010); “Godzilla on My Mind: Fifty Years of the King of Monsters” (2004); and “Manufacturing Ideology: Scientific Management in 20th-Century Japan” (2001).

He has received Fulbright, American Council of Learned Societies and Marshall fellowships, as well as the John Whitney Hall Prize of the Association for Asian Studies in 2000 and the William Rockhill Nelson Prize for Non-Fiction in 2005.

His teaching and research focus on the business, environmental and cultural history of 20th-century Japan. He holds degrees from Harvard, Oxford, and Princeton universities.

The Phi Beta Kappa chapter will induct as an honorary member W&L’s Emeritus Professor Roger Jeans, the Elizabeth Lewis Otey Professor of History Emeritus, in recognition of his longstanding commitment to scholarship and publication.

At the convocation, the chapter will announce the winner of the Phi Beta Kappa J. Brown Goehring Sophomore Award. The award goes to the student with the highest cumulative scholastic average through the end of the fall term of his or her sophomore year.