“Study abroad has opened my eyes to the international business and politics of the world.” 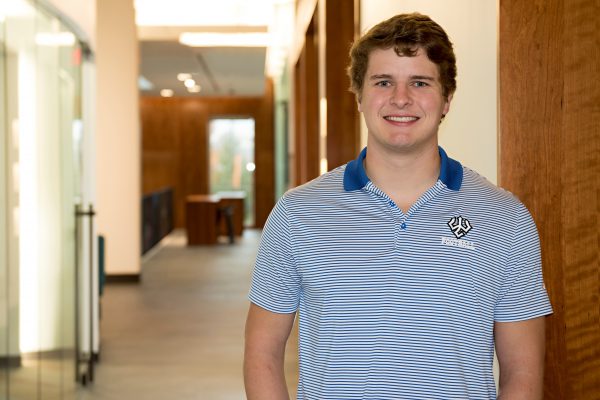 Witt Hawkins ’18, a Washington and Lee University global politics major and mass communications minor from Memphis, Tennessee, received a William Jefferson Clinton Scholarship to attend the American University in Dubai (AUD) during the winter term of 2017.

He is the third W&L student to receive a scholarship from the Clinton Presidential Foundation, which has partnered with AUD to provide funding for up to 10 students per semester.

The Clinton Scholarship, which covers his tuition, exists with the intent of sponsoring American College students who want to be exposed to Middle Eastern and Islamic cultures for the first time.

Hawkins is a member of the inaugural W&L Arabic language class, is in his third semester and will complete his language requirement next term when he takes his fourth semester at AUD. He will also be taking classes in Middle Eastern politics, history, religion and business.

“I am excited about this opportunity. Since Arabic isn’t an official program at W&L, there is no course sequence to supplement my linguistic studies,” said Hawkins. “At AUD, I’ll be receiving a comprehensive experience in Middle Eastern studies in addition to the immersive experience of living in an Arabic-speaking nation.”

On his return, Hawkins will apply for the Certificate of International Immersion through W&L’s Center for International Education. He has also studied abroad in Copenhagen and London.

“Study abroad has opened my eyes to the international business and politics of the world and that experience can be credited for my switch to a major in global politics and for wanting to take Arabic. I look forward to engaging with and learning about Middle-Eastern culture for the first time,” Hawkins continued.

He is a starting wide receiver on the varsity football team at W&L, a two time letterman, a 2014 Rookie of the Year and an ODAC Scholar-Athlete. He is a member of the Reformed University Fellowship, the Fellowship of Christian Athletes, Kappa Alpha Order and participated in the 2016 Mock Convention.

“I’m thrilled that Witt will be studying at AUD and that W&L has another winner of the prestigious Clinton Scholarship,” said Mark Rush, the Stanley D. and Nikki Waxberg Professor of Politics and Law at W&L and director of the Center for International Education. “This is a great stepping stone to further engagement in the Middle East and the growth of Middle East and South Asian Studies on our campus.”