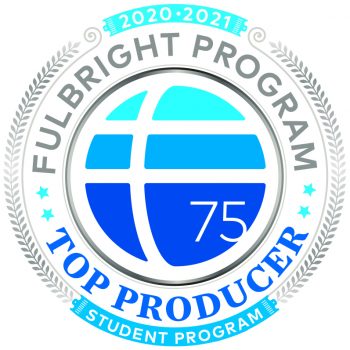 The university has been recognized as a top producer of Fulbright U.S. Students for three straight years.

Washington and Lee University is proud to be included on the list of U.S. colleges and universities that produced the most 2020-2021 Fulbright U.S. Students. Each year, the U.S. Department of State’s Bureau of Educational and Cultural Affairs (ECA) announces the top-producing institutions for the Fulbright Program, the U.S. government’s flagship international educational exchange program. The Chronicle of Higher Education publishes the lists annually.

The university has been recognized as a top producer of Fulbright U.S. Students for three straight years. Five students from W&L received Fulbright awards for academic year 2020-2021, and three students accepted the award.

“I am thrilled that W&L has once again been identified as one of the top-producing institutions for the Fulbright Program,” said Elizabeth Oliver, interim provost at W&L. “Having Matthew Loar as a dedicated director of fellowships along with committed faculty members like Jon Eastwood and supremely talented and driven students has helped us to achieve this honor. While the honor is real and rewarding, even more pleasure comes as we watch these students excel in their fellowships and go on to build influential careers in many different areas. What amazing opportunities the program opens for these students.”

Mary Kirk, director of the Office of Academic Exchange Programs in the U.S. Department of State’s Bureau of Educational and Cultural Affairs, said she and her colleagues are delighted to see that the top producers for 2020-21 “reflect the geographic and institutional diversity of higher education in the United States.

“In supporting their faculty advisers and administrators who guide their students through the Fulbright application process,” Kirk said, “these institutions benefit from having their students represent their campus overseas, often inspiring reciprocal exchanges from foreign Fulbrighters. Fulbright U.S. Students enrich their educations, advance their careers and make valuable contributions abroad and at home. They also expand their networks by joining the diverse and accomplished group of Fulbright alumni and receiving the professional recognition that comes with being named a Fulbright Student.”

The Fulbright competition is administered at W&L by Matthew Loar, director of fellowships, with the support of the university’s Fellowships Committee.

“W&L’s top-producer status is a real testament to the quality of our students and their competitiveness for major nationally competitive fellowships like the Fulbright,” Loar said. “It is also a testament to the tireless work of Jon Eastwood, who served as Fulbright Program adviser for the last three years, and the dedicated faculty on our Fellowships Committee.”

The Fulbright Program was created to increase mutual understanding between the people of the United States and the people of other countries. Fulbright is the world’s largest and most diverse international educational exchange program. The primary source of funding for the Fulbright Program is an annual appropriation made by the U.S. Congress to the U.S. Department of State’s Bureau of Educational and Cultural Affairs. This year marks the 75th anniversary of the Fulbright Program. Celebrations throughout the year will highlight the impressive accomplishments and legacy of the program and its alumni over its first 75 years, both in the United States and around the world. A dedicated 75th anniversary website (www.fulbright75.org) will be updated throughout 2021 to showcase Fulbright alumni, partner countries and anniversary events.

Since its inception in 1946, over 400,000 people from all backgrounds — recent university graduates, teachers, scientists and researchers, artists and more — have participated in the Fulbright Program and returned with an expanded worldview, a deep appreciation for their host country and its people, and a new network of colleagues and friends. Fulbright alumni have become heads of state, judges, ambassadors, cabinet ministers, CEOs and university presidents, as well as leading journalists, artists, scientists and teachers. They include 60 Nobel Laureates, 88 Pulitzer Prize winners, 75 MacArthur Fellows and thousands of leaders across the private, public and nonprofit sectors.

For more information about the Fulbright Program, visit eca.state.gov/fulbright. W&L students interested in applying for the Fulbright U.S. Student Program should contact Matthew Loar in the Ruscio Center for Global Learning (Room 225) or by email at mloar@wlu.edu. 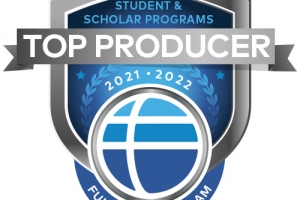