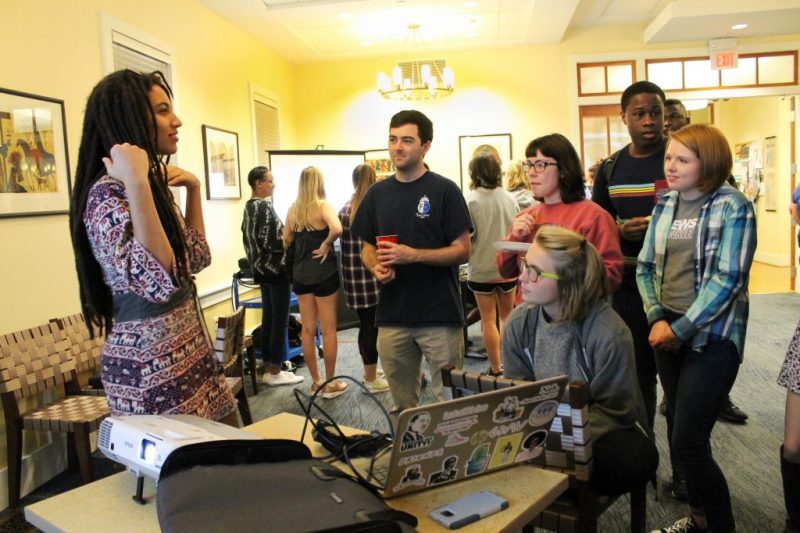 Baridapdoo Wiwuga ‘20 talks to a group of students at the black hair information panel during Black History Month 2017.

Washington and Lee University’s Office of Diversity and Inclusion presents a month-long schedule of events in celebration of Black History Month on the W&L campus. Events will last through February and are free and open to the public.

On Feb. 8 at 7 p.m. in Northen Auditorium, professors Marc Conner and Lucas Morel will present the John Chavis Lecture in African-American Studies. A reception will follow the event.

The presentation will focus on elements of Conner’s and Morel’s recently released co-edited volume, “The New Territory: Ralph Ellison and the 21st Century.” Gathering the work of 15 major Ellison scholars, the book examines the achievement and relevance of Ellison’s writing for the America of the 21st century.

On Feb. 9 at 5 p.m. in Northen Auditorium, Mark A. Sanders, professor of English and chair of African-American studies at Emory University, will give a public lecture on “Blackness and Nationality: The Case of Ricardo Batrell and the Cuban Racial Narrative.”

Sanders’ talk is based on his research on “A Black Soldier’s Story: The Narrative of Ricardo Batrell and the Cuban War of Independence” (University of Minnesota Press, 2010) and his English-language translation and edition of “Para la Historia: Apuntes Autobiográficos de la Vida de Ricardo Batrell Oviedo” (1912), the only account of the Cuban War of Independence written by an Afro-Cuban. Refreshments will be served following the lecture.

The Student Alliance in Black Unity (SABU), in collaboration with the African Society, will host The Black Hair Informational on Feb. 12 at 6 p.m. in the Hillel Multipurpose Room. The purpose of the event is to help answer questions people may have about black hair. The informational will allow attendees to explore and experience various, vastly different types of black hair. There will be demonstrations, presentations, opportunities to touch different types of hair, and a panel at the end that will discuss the cultural connections between black hair, the black community and the world in general.

In addition to these events, there will also be several film screenings for Black History Month.

Visit the Office of Diversity and Inclusion’s page for more details and a full list of events.

The month’s activities are sponsored in part by the Office of Dean of Students, the Office of the Provost, and the Office of Diversity and Inclusion, as well as the University Lectures Fund and the Program in Africana Studies.