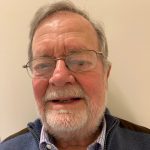 Bob was on the Student Executive Committee his freshman year and was President of the Inter Fraternity Council his senior year. He was a member of Phi Delta Theta and was inducted into Beta Gamma Sigma and Omicron Delta Kappa.

After serving two years as an officer in the U.S. Army, Bob received his J.D. from the University of Florida’s College of Law and joined Holland & Knight in 1964. Bob served as a member of the firm’s newly formed Management Committee from 1986 to 1991. He chaired the policymaking Directors Committee from 1992 to 2001. From 2001 to 2003, he served as Managing Partner. He was also the firm’s Professional Standards and Loss Prevention Partner for over 20 years and the author of the “Holland & Knight Commitment” which expresses the firm’s values and professional responsibilities.

Bob organized and led Holland & Knight’s Antitrust and Trade Regulation Practice and was Chairman of the firm’s Litigation Section. He was counsel for the firm’s clients in the Justice Department’s challenge to territorial agreements among electric utilities, a class action against a major fast-food franchiser, a price-fixing suit alleging a national conspiracy among rebar steel manufacturers, an FTC proceeding to block the merger of a major food processor, and defense of a monopolization claim against a leading pharmaceutical company. He was also lead counsel for the firm in the successful defense of actions brought by the State of Florida and a private party against all of the phosphate producers in Central Florida.

Before he retired from the firm and the active practice of law, he was a member of the American Bar Association and the American Bar Foundation. He was honored by his peers with his selection as a Fellow in the American College of Trial Lawyers, limited to no more than 1% of practicing attorneys.

Bob has been very active as an alumnus with W&L over the years, including serving on his reunion class committees and recognition through membership in the President’s Society. He is a driving force in the founding and support of the Institute for Honor. Established in 2000 at Washington and Lee by a generous endowment from the Class of 1960, the Institute for Honor includes an array of initiatives and specific programs designed to promote the understanding and practice of honor as an indispensable element of society. The Institute for Honor Symposium is dedicated to the advocacy of honor as the core value of personal, professional, business and community relations.

Bob met his future wife Marjorie when she was a freshman at Hollins. They have a daughter, Cameron, and a son, Rob. 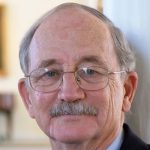 A history major, Holt ran cross-country and track and served as captain his senior year. He was a member of Pi Kappa Phi and graduated from the ROTC program as a Commissioned 2nd Lieutenant in the United States Army. He remained on active duty for six years serving in the United States and Europe and obtained the rank of Captain.

He earned a Ph.D. American history from the University of Virginia. Holt joined the W&L faculty in 1970 and taught in his specialty areas of the American South and the Civil War until his retirement in 2013. Holt also served as head of the history department from 1999 to 2007. During that time, he presided over a departmental self-study and began the process of initiating a new curriculum. For more than four decades, his entire professional life, he was a dedicated and respected professor, advisor and mentor to undergraduate students. He is remembered fondly by hundreds of former students and advisees.

Holt has always been a passionate supporter of W&L Athletics. He supports student athletes, as an ardent fan, especially soccer, lacrosse and cross-country. He has been an official for soccer games, track meets, and cross-country races. He was a faculty rep on the Student Affairs Committee and the Faculty Executive Committee. He served as the University Marshall and head of the Public Functions Committee. In 2014, Holt published his boo, South Carolina Fire-eater: Laurence Keitt, 1824-1864.

Holt and his wife, Becky, live in Lexington. He is the President of the United Way of Rockbridge County and sits on the board of the Rockbridge Area Relief Association. 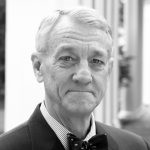 Blaine earned an MA and Ph.D. in US History from the University of North Carolina-Chapel Hill, and is a recognized authority in urban history and the history of the American South and has authored or co-authored 7 books and 22 articles or book chapters. He was selected by W&L to research and write the supplement to his mentor Ollie Crenshaw’s history of the university. Blaine’s 2015 book- Washington and Lee University, 1930 – 2000: Tradition and Transformation, is a thorough and valuable work.

He was the founding President and CEO of an international academic quality assurance company, and a consultant to the minister of higher education and research, and two national universities, in the United Arab Emirates. Blaine was a Fellow of the Institute of Southern History at the Johns Hopkins University 1971-72 and Fulbright Senior Lecturer at Hiroshima University in Japan 1977-1978, and has held positions as a long-time member and Chairman (2007-2011) of the Board of the International Student Exchange Programs in Washington, D.C.

Blaine has been a loyal donor and has served on reunion class committees. He and his wife, Mardi have two children, Blaine and Allison, and a grandson in the class of 2021. 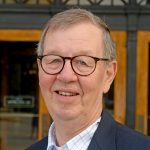 A psychology major, Dave was the Commander of Sigma Nu and inducted into ODK. He was a two time All State and All South Region soccer player and was inducted into the Athletic Hall of Fame in 2004.

After graduating from the W&L School of Law in 1969 and completing a tour in Vietnam as an Army Captain, Dave joined the respected Richmond, Virginia law firm Christian & Barton. For over 45 years, he represented commercial lenders, real estate developers in connection with the acquisition, zoning and financing of land development, and business entities in connection with the acquisition, sale and leasing of their properties. Dave served the legal profession as a member of the Virginia Bar Association and the Bar Association of the City of Richmond. He was the chair of its Real Estate Section.

For over 35 years, Dave was a volunteer leader of the non-profit organization St. Joseph’s Villa. He was Chairman of the Board of Trustees, the Villa Foundation, and their first Capital Campaign and currently serves as Honorary Chairman of the second Capital Campaign. During his involvement, St. Joseph’s Villa grew from annually serving fewer than five hundred children to serving over 3,000 children and families who face challenges like homelessness, mental illness, physical and developmental disabilities, autism, and other special learning needs.

His service to W&L and other good causes has been exemplary. He is a former member of the W&L Alumni Association Board and President of the Law Council. He has served as a Class agent and on numerous committees for undergraduate and law reunions. Dave and Gigi hosted many Poverty Program students during spring term. He worked for St. James’s Episcopal Church, St. Catherine’s School, and the Diocese of Virginia on various real estate matters. He co-chaired the Parents Campaign for St. Catherine’s School and was the co-chair of St. James’s Every Member Canvas. Dave was a member of the Board of Directors of The Country Club of Virginia. The Virginia Association of Fundraising Executives of Central Virginia awarded Dave its Volunteer Impact Award in 2018.

Dave and his wife Gigi (Hollins ’68), have enjoyed numerous programs and trips with W&L Lifelong Learning. Their son Scott is W&L Class of 1994.