W&L Celebrates Women’s History Month and the 19th Amendment The celebration includes a film screening, a faculty panel and a trivia game. All events are free and open to the public. 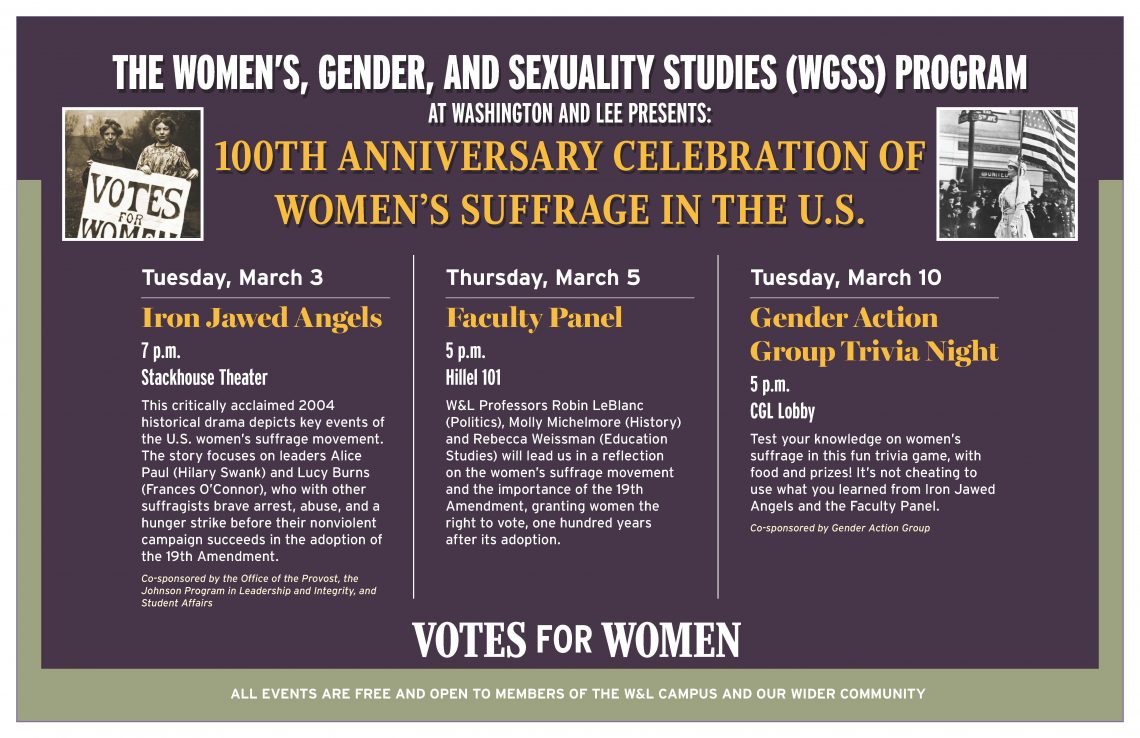 This March, Washington and Lee University will celebrate Women’s History Month and the 100th anniversary of the 19thAmendment to the U.S. Constitution, which grants women citizens the right to vote. The celebration includes a film screening, a faculty panel and a trivia game. All events are free and open to the public.

On March 3, a film screening of “Iron Jawed Angels” will be presented in Stackhouse Theater at 7 p.m. The critically acclaimed 2004 historical drama depicts key events of the U.S. women’s suffrage movement. The story focuses on leaders Alice Paul (Hilary Swank) and Lucy Burns (Frances O’Connor), who with other suffragists braved arrest, abuse and a hunger strike before their nonviolent campaign succeeded in the adoption of the 19th Amendment.

W&L will host a faculty panel on March 5 at 5 p.m. in Hillel 101. W&L professors Robin LeBlanc (politics), Molly Michelmore (history) and Rebecca Weissman (Education Studies) will lead a reflection on the women’s suffrage movement and the importance of the 19th Amendment.

The public is also invited to the Gender Action Group Trivia Night at 5 p.m. on March 10 in the Ruscio Center for Global Learning lobby. Participants will test their knowledge on women’s suffrage in the trivia game, with food and prizes.

Take Back the Night
March 17, at 7 p.m. in the Science Center Atrium
SPEAK will sponsor the annual Take Back the Night and Candlelight March to support survivors of sexual assault. Refreshments will be served.

Feminism Panel
Mar 19, at 6:30 p.m. – 8 p.m. in Elrod 345
Come and have an honest discussion with a panel of students, professors and other members of the W&L community about everyone’s favorite F-word…Feminism!