By Patricia Hobbs, associate director of University Collections of Art and History
November 1, 2019 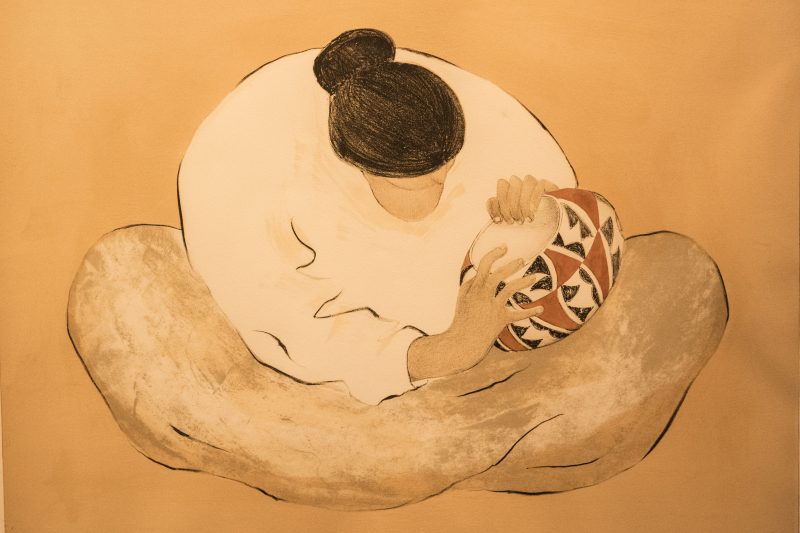 November marks Native American Heritage Month, created in 1990 during the George H. W. Bush administration as a tribute to the rich ancestry and traditions of Native Americans. The W&L Art Collection contains numerous paintings that depict imagery of Native Americans, both storied and authentic, as well as works by three artists who have Native American ancestry: Fritz Scholder, John Nieto, and R. C. Gorman.

Fritz Scholder (1937-2005), whose paternal grandmother was a member of the Luiseño Nation of California, courted controversy in the late 1960s with paintings, prints, photographs and sculpture that projected a realistic representation of modern Native American identity and experience. Doing so, he shattered stereotypes and inspired a generation of other Native American artists. Influenced by Pop art, surrealism and abstract expressionism, as well as the works by British artists Francis Bacon and David Hockney, Scholder’s subject matter was broad. His bronze sculpture “Another Mystery Woman” is part of a body of works in which he explored the figure of a veiled or masked woman as representative of human experience, embodying life, love and death. This sculpture was donated in 2019 by Rick Kramer ’69 as part of a larger gift of the art collection amassed by his parents, Judith F. and Eugene M. Kramer ’40. 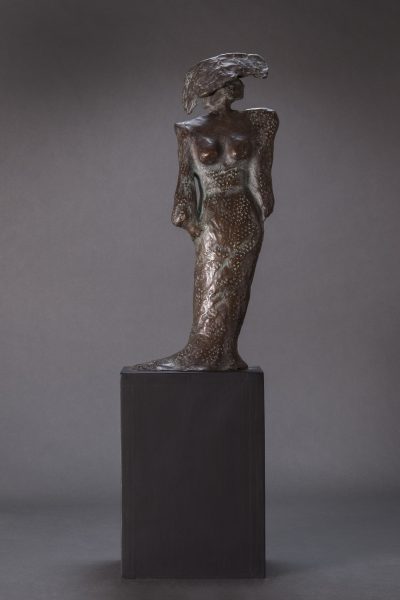 “Another Mystery Woman” (1987) by Fritz Scholder

John Nieto (1936-2018) was a painter, printmaker and sculptor whose ancestry was Hispanic and Native American, both Apache and Navajo. Nieto’s works are noted for bold brushwork and vibrant hues, influenced by the bold colors of Fauvist artists including Matisse and Derain, whose works he first encountered on a trip, a kind of “vision quest,” to Paris. Nieto primarily depicted Native Americans. His serigraph “Indian Chief” is represented in the university’s Kamen Collection of Western Art.

That collection, amassed by legendary New York and Hollywood talent agent and W&L alumnus Stanley A. Kamen ’40, includes over 50 paintings, prints and sculpture by mostly mid-20th century artists who worked in the American west. Kamen died in 1986 and bequeathed his collection to his alma mater. It is now on permanent exhibition in the gallery named in his honor, located in the Lenfest Center for the Performing Arts. In addition to John Nieto, the collection includes noted Western artists such as Charles Schreyvogel, Michael Coleman, Harry Jackson, Gordon Phillips, James Bama and Paul Surber, all of whom depicted the mythology of Native Americans and the American cowboy. The collection also includes Rudolph Carl Gorman (1931-2005).

Son of Carl Nelson Gorman, an artist, teacher and one of the original WWII Navaho Code Talkers, R. C. Gorman was a painter, printmaker, sculptor and ceramicist who studied art and literature at Northern Arizona University and received a scholarship from the Navajo Tribal Council to study art at Mexico City College. There, he was influenced by the art of Mexican artists Diego Rivera, as well as David Siqueiros and Rufino Tamayo (both represented in the W&L art collections). Based in Taos, New Mexico, where his primary subject matter was Navajo women, Gorman worked in a fluid, stylized manner that is highly recognizable and immensely popular. “Navajo Potter” is one of two Gorman lithographs in the Kamen Collection. 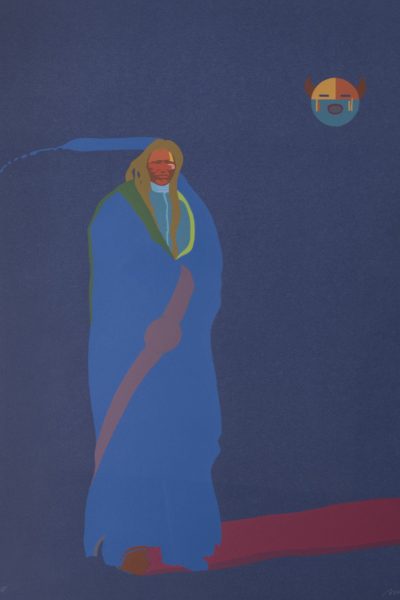 The New York Times called R. C. Gorman the “Picasso of American Indian artists” when he exhibited in New York City in the 1970s. He was the only living artist included in the Masterworks of the American Indian exhibition mounted at the Metropolitan Museum of Art in 1973. Five years later, Gorman showed with Andy Warhol, who took Polaroid photographs of the Native American artist in 1979 and later created a series of silkscreen portraits of Gorman.

Gorman was not Warhol’s only Native American subject. In 1986, the iconic Pop artist executed his “Cowboys and Indians” screen print suite, which was an ironic commentary on the popular myth of the American Wild West. He originally conceived as part of that series a colorful portrait of Sitting Bull. Warhol appropriated the portrait of the equally iconic Hunkpapa 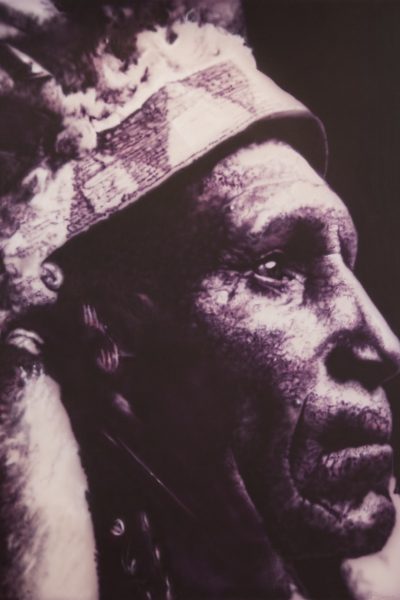 Lakota Sioux Chief from an archival 1881 photograph by Orlando Scott Goff. “Sitting Bull” is one of six screen prints gifted to W&L by The Andy Warhol Foundation for the Visual Arts. The foundation has been distributing photographs and screen prints from the Warhol estate to educational institutions since 1999.

Like Warhol, other artists have used historic images as inspiration for contemporary works. California artist Ray Hare is known for his hyper-realistic oversized details of plants, animals, landscapes and people. Hare based his portrait of “Raven Blanket,” a member of the Nez Percé tribe in the Pacific Northwest, on a 1910 photograph that is one of over 2000 portraits of Native Americans taken by photographer and ethnologist Edward S. Curtis. The Hare portrait, now on display in the Kamen Gallery in the Lenfest Center, was a 1988 gift of alumnus Richard R. Kreitler ’65.

These paintings by and about Native Americans are part of the collection of the Museums at Washington and Lee University. As such, they serve as important academic resources that can be used as springboards for research, discussions and debates. The works are located not only in the Kamen Gallery, but in academic buildings across campus where they inspire and challenge students in multiple disciplines and in numerous ways.

In addition, the museums also function as learning laboratories and offer students real-world, hands-on experiences in the museum and related fields using our art, ceramic and history collections. In summer 2018, for example, four interns served as a team of curators assigned to reinstall the Kamen collection in a fresh way. Iman Messado ’19, Caroline Bailey ’20, Liza Aldridge ’21 and Lindsey Hewitt ’21 reorganized the collection, grouping the works by subject and theme and taking the first steps to reinterpret the art as more than a private collection. As a team, they designed a new layout, installed the exhibition, wrote labels and summarized their brief research in an introductory text panel in which they stated, “While our perspective on these artworks may change, the paintings and sculptures [Stan] Kamen collected continually remind us of some of the most enduring facets of American national identity: conflict, natural splendor, resilience and individuality.”

We invite our community at-large to visit the Kamen Gallery to view the collection of Western art and to contemplate our various works by and about Native Americans, their indigenous history and their continuing contributions to the rich history of the United States.