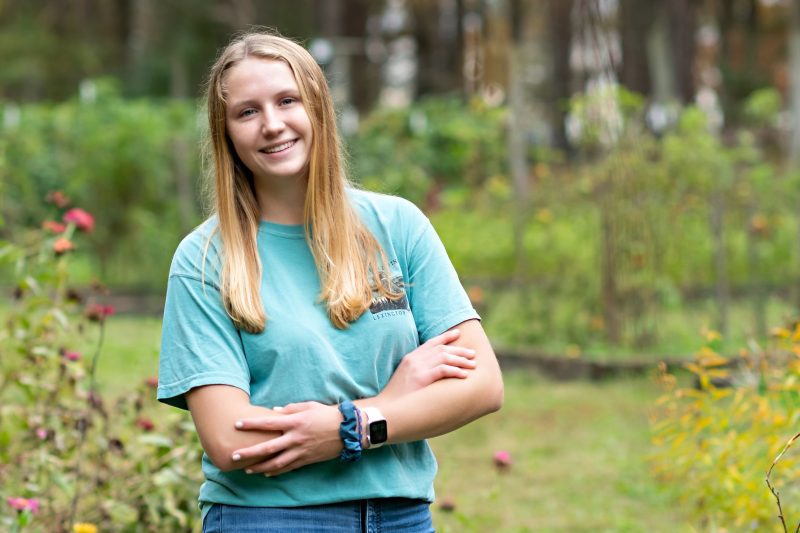 “The perception young people have is that agriculture is an old guy on a tractor in the middle of nowhere, and that’s not really where we’re heading.”

Natalie McCaffery ’24, a first-year student at Washington and Lee University, recently put her agriculture technology knowledge to work in a Forbes Under 30 AgTech+ Hackathon, a virtual event focused on solving problems in the agriculture industry.

McCaffery was part of a team, along with a research scientist and two entrepreneurs, who spent the weekend of Oct. 2-4 brainstorming a solution to a billion-dollar problem: bovine respiratory disease (BRD). About half of all cattle feedlot deaths in North America every year are the result of the contagious disease, so McCaffery and her teammates worked to figure out how the beef industry can better manage the disease.

Their concept, TagAg, would use predictive analytics to identify cows at risk for BRD and trace outbreaks of the disease. The idea capitalizes on the fact that many cattle ranchers are already electronically gathering data about their cattle, such as veterinary records, parentage and food consumption history. Using QR codes, TagAg would make it possible to track a cow through the entire supply chain, from birth to slaughter.

“BRD wipes out a large population of cattle per year, and you lose quite a bit of money because you have to put a lot of money into protecting your cows,” McCaffery said. “Understanding where to vaccinate, how to isolate certain heads from the herd and then making better decisions based on an algorithm would save money on vaccines, vet bills and labor for the entire herd.”

McCaffery is not a member of the Forbes Under 30 list—heck, she hasn’t even hit 20 yet—but she believes she was invited to participate in the hackathon because of her contacts in the agriculture industry and her participation in previous Forbes events. She has been fascinated by agriculture technology for several years; in 2019, she won a Gold Award, the Girl Scouts’ highest achievement, for SmartFarm, a program she developed at a local high school in Santa Barbara, California, to teach sustainable agriculture and interest young people in farming.

“The perception young people have is that agriculture is an old guy on a tractor in the middle of nowhere,” she said, “and that’s not really where we’re heading. So if you can change the viewpoint of youth around agriculture, we will have a stronger workforce in the next 10 to 15 years.”

McCaffery traces the roots of her interest in agriculture technology to middle school, when she first began to take STEM courses like robotics, engineering and coding. As she got into high school and continued to explore science and research, she grew interested in applying technology to problem-solving in the agriculture industry as a way to address world hunger.

“There are some people who don’t have the necessary nutrients to go about their lives, and hunger is such a big problem,” she said. “It’s shocking to me because I know that we can grow the food. That’s what drives me and motivates me to be involved in agriculture.”

McCaffery has spent the last few years attending agriculture conferences, meeting people in the field, going on farm visits and otherwise doing whatever she could to learn more about the agriculture industry. This past summer, she worked virtually for Syngenta, a global biotech company that makes agrichemicals and seeds. She doesn’t know if AgTag will become a reality, but she is busy working on a project that would create a pre-professional platform for developing nations that are dependent on small-holder agriculture. “It’s like Engineers Without Borders,” she said, “except it’s farmers without borders.”

She said she’s grateful for the hackathon experience.

“I didn’t know what I was getting myself into, but I loved it,” she said. “It was a great experience and a good use of a weekend.”