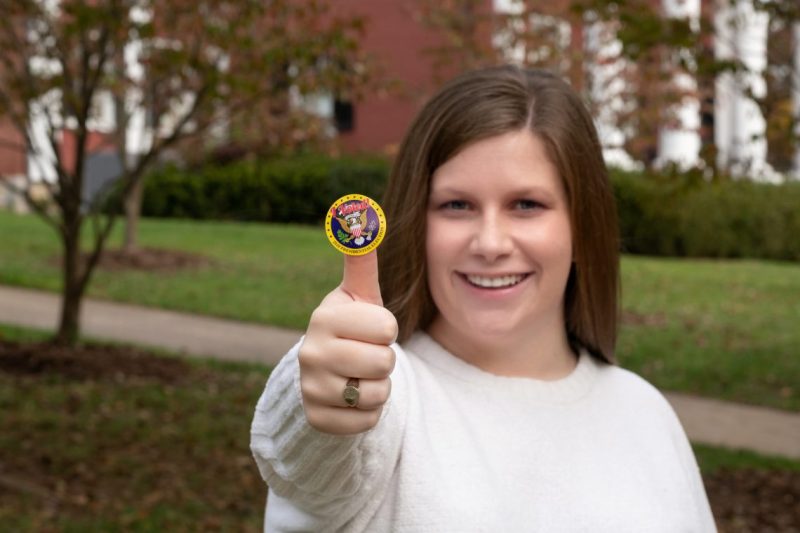 Sadie Pruett ’21 is president of W&L’s Pi Beta Phi chapter, which led the way in a Hillel contest to drive student engagement in the 2020 election.

“…what convinced me that this was an initiative worth bringing to campus was the truly non-partisan spirit of the effort.”

Some Washington and Lee University students kept a close eye on the numbers as Election Day approached—not just presidential election polls, but also the leaderboard in a national contest to see which college’s Hillel could drum up the most interest in voting.

W&L Hillel, the Jewish life organization on campus, ended their involvement in the MitzVote campaign with the highest score. W&L Hillel outperformed chapters at larger universities, such as the University of Pennsylvania and Northeastern, by an astonishingly wide margin: As of Nov. 2, W&L’s group had racked up 56,638 points to the closest competitor’s 15,671.

“I don’t think they’re going to catch up,” said Andrew Tartakovsky ’23, W&L’s lead civic engagement intern and speaker chair. “I wish them well, I really do!”

The Hebrew word “mitzvot” refers to the 613 commandments found in the Torah, which provide the framework for leading a righteous life, and many would argue that exercising the right to vote is a righteous thing to do. MitzVote, a play on that word, is a partnership between Hillel International and Motivote, an online platform that encourages young people to vote by offering tools and information such as personalized voting plans and social engagement. The MitzVote competition challenged Hillels at colleges and universities across America to see which could engage the highest number of students to join Motivote before Election Day, thus earning points in the competition. W&L Hillel connected more than 10% of the student body with Motivote.

“When Hillel International launched MitzVote over the summer, I was struck by just how easy the Motivote platform makes it for students to figure out how and where to register and vote,” said Maggie Shapiro Haskett, director of Jewish life at W&L. “But what convinced me that this was an initiative worth bringing to campus was the truly non-partisan spirit of the effort. MitzVote inspires and empowers our students to be actively involved citizens with both the practical how-to information they need as well as unbiased facts about the candidates and issues on the ballot. I had a hunch that the competitive twist would be a hit with W&L students, and it’s been fun to see how motivated they are.”

Shapiro Haskett asked Tartakovsky to come up with a strategy for the contest, and he started by recruiting a diverse team of interns with connections to Greek life, the Office of Inclusion and Engagement, athletics and other areas. He and those interns — Olivia Allen ’23, Sarah Beaube ’23, Judy Park ’22, Katie Palmer ’22, Charlie Moore ’23 and Mack Rukaniec ’23 — invited each student organization at W&L to form a team and compete against other organizations on campus.

“We took a whole-school approach,” Tartakovsky said, “as opposed to schools that kept it mostly inside Hillel.”

The top team on campus was Pi Beta Phi, which had recruited 69 of its 83 members to Motivote as of Nov. 2. Chapter president Sadie Pruett ’21 encouraged most of that participation by frequently sending a link to Motivote and encouraging her sorority sisters to get involved.

“I think one reason it went so well for us and why our chapter got so involved is because it’s an important topic for so many of us,” Pruett said. “Many of us are politics majors and are very politically engaged, and we have a very wide spectrum of political views.”

Once students join Motivote, she said, they have access to information about how to register and where to vote. It generates text messages to members with information such as the deadline for mail-in ballots or the deadline to register to vote. It also encourages social engagement such as posting a selfie with an “I Voted” sticker. “It’s a cool way to get people involved and see how easy it is,” Pruett said.

Both Tartakovsky and Pruett said anecdotal evidence leads them to believe that college-age Americans are highly motivated to vote in this election.

“The saying in politics is that the youth vote is always four years away, but it never really seems to come,” Tartakovsky said just before the election. “This year, judging by people’s level of enthusiasm for one or the other candidate—or neither of them—it may come to pass. People really seem to be taking advantage of the resources available to them.”

Pruett has noticed a great deal of interest in former high school classmates, and even more in the W&L student body.

“I think we see how important it is and that we have the chance to be involved in something bigger than ourselves,” she said. “It’s a big deal.”

Shapiro Haskett said she’s proud of Tartakovsky and the rest of the Hillel team for making the competition a big success.

“Andrew’s strategic networking really paid off,” she said, “and I’m proud that Hillel is able to help so many new voters engage in this election.”