W&L Honors Veterans at Annual Gathering "It's good to see people from all walks of campus who have served in many different ways," said President Will Dudley. 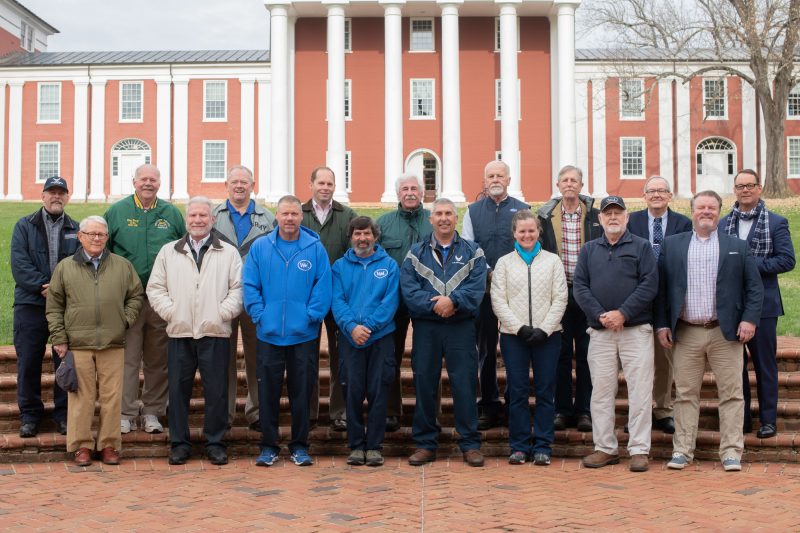 Veterans in the Washington and Lee University community were honored Monday morning at an annual Veterans Day observance in front of Lee Chapel. Nearly 20 veterans gathered in brisk morning temperatures for a prayer and brief comments before heading to the warmth of the Reeves Center for fellowship, coffee and refreshments.

The event, which takes place this time each year, was organized by W&L employees and veterans Paul Burns and Mark Fontenot. Mike Young, retired director of Public Safety and a Vietnam veteran, said he is thankful for the chance to get together with fellow vets each year.

“I’m grateful that Paul and Mark are able to pull this thing together,” he said. “This is our day. Never forget that.”

President Will Dudley thanked the group for their service. “It’s good to see people from all walks of campus who have served in many different ways,” he said.

Some of the W&L veterans recognized on Monday reached out to share additional details about their time in the service:

Buddy Atkins, retired director of donor relations, voluntarily joined the Navy in August 1968 and started active duty at Officer Candidate School in Newport, Rhode Island in June 1969. After commissioning as an ensign, he was assigned to Communications School. After completion, the Bureau of Naval Personnel assigned him to a destroyer, the USS Lowry DD-770. The Lowry had just returned from an extended tour of duty to Vietnam and was reassigned from Norfolk to a new homeport at the Philadelphia Navy Yard as part of a destroyer squadron whose purpose was to keep Navy Reserve units qualified for recall if needed. Over three years, he progressed through the Operations Department from combat information officer to department head. When his active duty obligation expired, he left active duty as a lieutenant (select) and then served 23 more years in the Navy Reserve and retired as a commander. “My father served during WWII in a Marine Corps amphibious assault battalion,” Atkins said. “He participated in four opposed landings in the Pacific. When I was facing the Vietnam War draft, he recommended that I volunteer for the Navy. His reasoning was that the shipboard food was good and when it came time to fight you did not have to leave it behind.”

Bob Shaeffer, senior technology integration specialist in ITS, retired from the Air Force in 1997 after 20 years of service. He entered the Air Force in 1977 by way of an ROTC scholarship at Iowa State University. “It paid for my college, and since my draft number was 14, keep me out of being sent to a foxhole in Vietnam,” he said. After flight training, he was assigned to Germany flying the RF4C jet fighter. Shaeffer was stationed overseas for the next 17 years in Germany, England, Japan and Korea. His primary duty was flying reconnaissance along the borders of what was then East Germany and North Korea. He spent his final year as a liaison to the Army at Fort Campbell, Kentucky.

Mark Fontenot, a fire safety systems inspector/electrician in Facilities Management, served in the Virginia Air National Guard for 21 years, from 1987 until retiring in 2008 as an E-7. He was based in Richmond for 18 years and finished his enlistment at Langley Air Force Base. His job title was an aircraft maintenance technician crew chief. In his 21 years of service, he worked on aircraft such as A-7, F-16 and F-22.

Chrissy van Assendelft, a technology integration specialist in ITS, joined the Army delayed-entry the spring of her senior year at Virginia Tech, and left for basic training on her preassigned date of September 12, 2001 — the day after 9/11. She served as a Korean linguist, spending a year and a half at the language school in Monterey, California, before heading to a tech school at Good Fellow Air Force Base in Texas. She then went to Korea, where she was stationed out of Uijongbu. Because she got frostbite several times, she was sent to indoor duty as a tax preparer for other Army members at Camp Casey, a base closer to the demilitarized zone. In the spring, she returned to Uijongbu. She had a permanent change of station to Fort Campbell, KY, in November 2004 before deploying to Iraq from September 2005-October 2006 with 2nd Division, 101st Airborne. She was discharged on Christmas Eve 2006.

Paul Burns, director of environmental health and safety, was a member of the National Guard and Army Reserves from 1968-2009. He served in Iraq in 2005-06 and retired as a lieutenant colonel.

Dick Kuettner, director of the Global Discovery Laboratories, was in the Army from 1970-75. He served in intelligence collections in Germany and Vietnam, and separated four days shy of becoming a captain.

J. David Thompson ’19L served in the U.S. Army as a Military Police Officer and Special Operations Civil Affairs with multiple deployments to Afghanistan and one to Jordan—receiving a Bronze Star, among other decorations. As an MP in Afghanistan, he partnered alongside security and government officials to expand government outreach. As a Civil Affairs Officer in Afghanistan, he trained Afghan military and government officials, advised Naval Special Warfare, coordinated humanitarian assistance and collaborated in refugee response. In Jordan, Thompson focused on countering violent extremism and assisting communities impacted by the refugee crisis. He currently serves as a major in the Army Reserves.