W&L Hosts Public Interview with Ty Seidule ’84 Seidule will discuss his new book, "Robert E. Lee and Me: A Southerner's Reckoning with the Myth of the Lost Cause.” 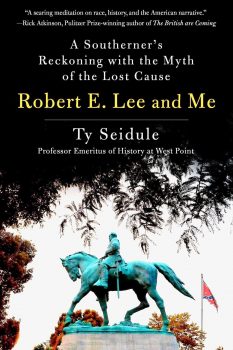 Seidule will take part in a virtual interview about his new book, “Robert E. Lee and Me: A Southerner’s Reckoning with the Myth of the Lost Cause.”

Washington and Lee University will host Ty Seidule ’84 on Feb. 16 at 7 p.m. Seidule will take part in a virtual interview about his new book, “Robert E. Lee and Me: A Southerner’s Reckoning with the Myth of the Lost Cause.”

The public is invited to watch for free at go.wlu.edu/ty-seidule-talk.

Seidule is a professor emeritus of history at West Point, where he taught for two decades. He is also the Chamberlain Fellow at Hamilton College, as well as a New America Fellow. Seidule has published numerous books, articles and videos on military history, including the award-winning “West Point History of the Civil War.”

Seidule received his bachelor’s degree from W&L and his master’s and doctorate degrees from Ohio State University. He served in the U.S. Army for 36 years, retiring as a brigadier general in 2020. During his time in the Army, Seidule commanded cavalry and armor units in war and peace, serving in the United States, Germany, Italy, the Balkans, Saudi Arabia and Iraq.

Brought up to revere Robert E. Lee, Seidule once believed that the Confederates were romantic underdogs who lost the American Civil War with honor. In his book, Seidule deconstructs the Lost Cause narrative, discusses his former hero Lee and details how he came to understand that the Southern states went to war to protect and expand slavery.

His visit is sponsored by the History Department at W&L.