W&L Hosts Public Lecture with Rachel Louise Snyder Snyder is a journalist known for her works on the topic of domestic violence. 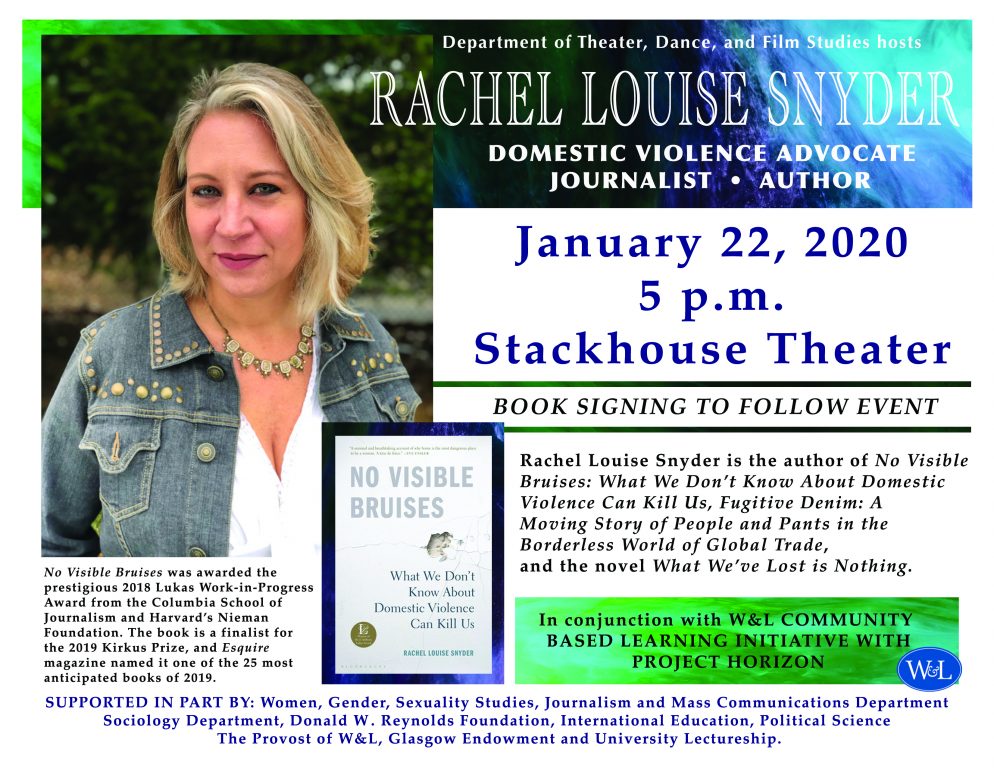 Washington and Lee University will host Rachel Louise Snyder, a writer, professor at American University and a public radio commentator, for a public lecture on Jan 22.

Washington and Lee University will host Rachel Louise Snyder, a writer, professor at American University and a public radio commentator, for a public lecture on Jan 22 at 5 p.m. in Stackhouse Theater.

Snyder’s talk is free and open to the public. A book signing will follow the event in the Commons living room.

Snyder is a journalist known for her works on the topic of domestic violence. She is the author of “No Visible Bruises: What We Don’t Know About Domestic Violence Can Kill Us,” “Fugitive Denim: A Moving Story of People and Pants in the Borderless World of Global Trade” and the novel “What We’ve Lost is Nothing.”

“Right now, domestic violence rates are at their highest levels in the past 20 years, especially homicides resulting from domestic violence,” said Stephanie Sandberg, assistant professor of theater at W&L. “The Violence Against Women Act is stalled in the Senate and hasn’t moved after passing the house in March of 2019. So many agencies and programs for the prevention and treatment of sexual assault and domestic violence are in danger of losing funds and shutting down. This danger includes specialized police for units, places like Project Horizon, special investigators and all sorts of education and prevention programs. Rachel Louise Snyder gets to the heart of the matter in her book ‘No Visible Bruises.’”

Through the stories of victims, law enforcement, perpetrators and reform movements across the country, Snyder explores the origins of private violence, its effect on society, and what is needed to address the issue at its core.

“No Visible Bruises” was awarded the 2018 Lukas Work-in-Progress Award from the Columbia School of Journalism and Harvard’s Nieman Foundation. The book was a finalist for the Kirkus Prize and one of Publishers Weekly’s top non-fiction books of 2019.

The event is hosted by the W&L Department of Theater, Dance, and Film. The talk is in conjunction with W&L Community Based Learning Initiative with Project Horizon. It is supported in part by the Women’s, Gender, and Sexuality Studies Program, the Department of Journalism and Mass Communications, the Donald W. Reynolds Foundation, International Education at W&L, the Office of the Provost, the Glasgow Endowment, the Sociology and Anthropology Department and the University Lectures fund.