“You don’t need to put your life on the line to be an antiracist, but you do need to do something.”

To Assistant Professor of English Diego Millan, a core faculty member in the Africana Studies Program who moderated the discussion, assisting with the panel was a privilege. “The panelists examined historical episodes where white individuals actively participated in Black freedom movements, tying the particular histories of colonization societies, abolition and civil rights struggles to our contemporary moment,” he said. “I know many of my students were tuned in, and our discussions going forward this term will benefit from the work the panelists have done.”

Ballah began by discussing the history of Liberia and the American Colonization Society (ACS), an all-white organization which sought to remove all African Americans from the United States over the objections of most free Blacks. She led the audience through the movement’s beginnings in the early 19th century through the founding of Liberia in 1847 and the settlement of over 16,000 Black Americans there, noting that the ACS, while anti-slavery, was also openly racist.

She discussed opposition to the ACS’s colonization plans from white abolitionists before ending her remarks by pointing out similarities between 19th century struggles for equality and those in the 21st century. “While progress has been made in civil rights,” she said, “there remains a historical continuity of the subjugation of Blacks as a perceived other… If 19th century America was marked by the struggle for citizenship, the struggle of the 21st century continues to be for full citizenship… White allies can and must continue to play an active role in this process, while simultaneously engaging in a form of critical self-reflection that will enable them to examine their own biases on a continual basis.”

Dennie’s remarks centered the risks that have always accompanied advocacy for Black equality in the United States, for both Black and white Americans. Describing events in the 19th and 20th centuries, she pointed out that both the violent resistance of the white abolitionist John Brown in 1859 and the peaceful activism of Viola Liuzzo, a pro-civil rights white woman murdered by the KKK in 1965, led to their deaths. She ended by discussing recent violence against antiracist protesters and offering a call to action.

“Historically, racist, violent backlash has always emerged in response to antiracist activism among Black and white activists,” she said. “There will always be some type of risk associated with standing against racism… What risks will you take? You don’t need to put your life on the line to be an antiracist, but you do need to do something.”

Rainville spoke about abolition, racism and antiracism in Lexington and Rockbridge County. She recounted the history of the Rockbridge branch of the ACS, including the roles of men associated with W&L, as well as the ongoing work of the Rockbridge Historical Society in revealing the stories of over 100 African Americans who left Rockbridge for Liberia. She closed her remarks by noting historical episodes of racist violence in Lexington.

The evening closed with a short Q&A with the panelists, who discussed the role of Christianity in movements for and against slavery, the role of violent resistance to racism, and how to organize antiracism movements on campus.

A recording of the panel discussion in its entirety can be listened to here.

W&L Hosts Public Panel as Part of Yearlong ‘Activism and Black Life’ Series The panel discussion, titled "Antiracism, White Activists, and Black Freedom," is free and open to the public to watch virtually. 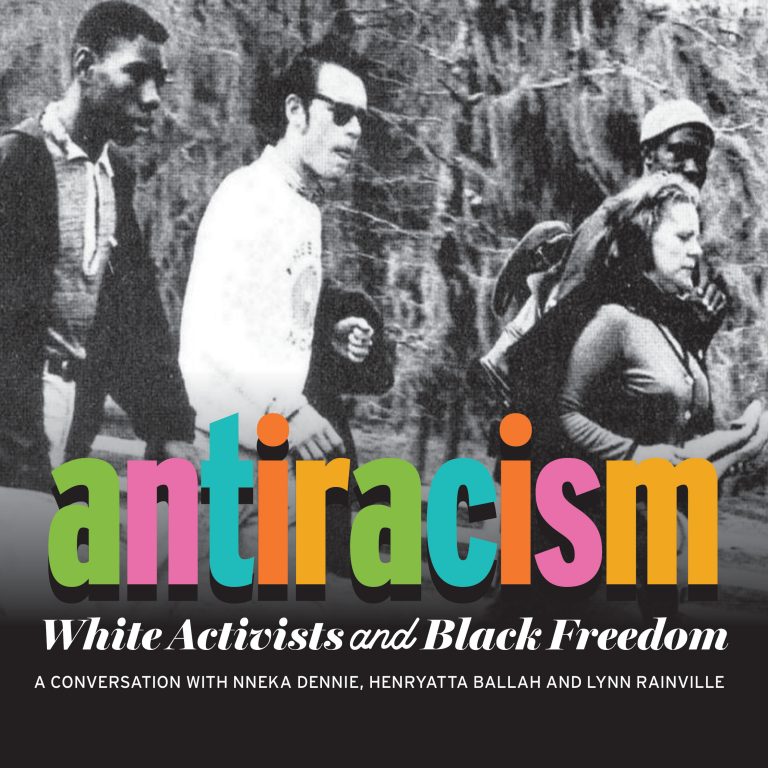 The public can register to attend the virtual event for free at https://go.wlu.edu/antiracism.

The panelists will examine and discuss historical episodes where white individuals actively participated in Black freedom movements. They will also address colonization, abolition and the civil rights struggle, and offer insights from their research. After providing international, national and local examples of interracial collaboration in the Black liberty enterprise, the panelists will suggest how prior case studies relate to contemporary social realities.

Dennie is a Black feminist scholar with expertise in African American intellectual history. Her courses examine race and gender in the United States and the Caribbean. Dennie earned her doctorate in African American studies at the University of Massachusetts Amherst and completed her bachelor’s degree in political science with honors in Africana studies at Williams College. Her research interrogates the work of 19th-century Black women thinkers.

Ballah’s scholarly research and teaching focus on “bottom-up” history, emphasizing the ideas and methods of ordinary people dealing with complex issues within their particular historical moments. Emphasis on the “grassroots” continues to inform her course content, historical methods and pedagogical goals.

Ballah holds a doctorate in African history from Ohio State University. She is a historian of 19th and 20th century Africa. Her research focuses on Liberia, where she has consulted the National Archives and conducted extensive fieldwork. Ballah’s work has been supported by several grants and fellowships, including a prestigious Career Enhancement Fellowship from the Woodrow Wilson National Foundation in 2020.

Rainville received her bachelor’s degree in history and anthropology from Dartmouth College and her master’s degree and a doctorate in anthropology from the University of Michigan. She has spent the last two decades studying Virginia’s historic African American cemeteries, enslaved communities and their descendants, segregated schools, poor farms and their role in World War I.

The panel is part of the university’s yearlong series, “Activism and Black Life,” which is co-sponsored by the Rupert H. Johnson Jr. Program in Leadership and Integrity. Other events in the series will include guest speakers, film screenings, music listening sessions and more.