Several W&L law alumni were running for office or up for reelection this year. Below is a summary of the results. Congratulations to the winners.

Republican Bob Goodlatte ’77L won reelection to the U.S. House of Representatives from Virginia’s 6th congressional district. This will be Congressman Goodlatte’s 11th term in office.

Republican Morgan Griffith ’83L won reelection to the U.S. House from Virginia’s 9th congressional district. A former majority leader in the Virginia House of Delegates, this will be Congressman Griffith’s second term in office. He was first elected to Congress in 2010 after serving in the General Assembly from 1994-2011.

Democrat Joe Donnelly ’81L was elected to an open seat in the U.S. Senate in Indiana. Donnelly has represented Indiana’s 2nd congressional district in the U.S. House since 2007. Donnelly became the first Democrat in more than a decade to win a statewide race in Indiana and will succeed Senator Richard Lugar, who lost his primary race to Richard Mourdock.

Did we miss someone? Contact pjetton@wlu.edu with other election news for W&L Law alumni. 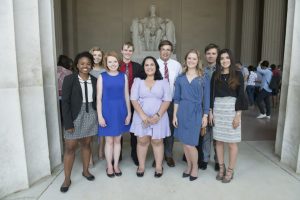 From Lexington to Capitol Hill