W&L Law Dean Brant Hellwig to Conclude Deanship at End of Academic Year Hellwig, who took the helm of the law school in 2015, helped navigate the Law School through a difficult financial period and oversaw significant improvements in applications and entering class credentials, among other achievements. 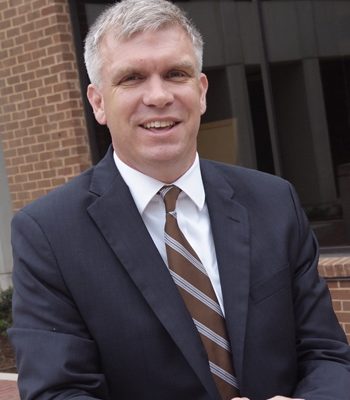 Brant Hellwig, dean and professor of law at Washington and Lee University School of Law, has announced that he will conclude his tenure as dean at the end of the academic year in June 2021. Hellwig has served the school as dean since 2015. He plans to return to the full-time faculty following a sabbatical.

Hellwig made his announcement in a message distributed on Tuesday to the student body and law alumni.

“Serving as dean has permitted me to form relationships with a range of individuals who have great affection for W&L Law and are committed to our success,” said Hellwig. “Together, we have taken steps to maintain and improve our innovative program of legal education while prioritizing student outcomes.  In the process, we also have taken pride in what makes our small, close-knit law school unique.”

W&L President William C. Dudley said a yet-to-be-named interim dean will succeed Hellwig, with a national search for a permanent replacement commencing in 2021.

“The law school has flourished under Brant’s leadership, which began during a challenging period for legal education and for the Law School in particular,” said Dudley. “I am grateful to Brant for his able leadership of the school and his partnership with offices across the university. We owe him a debt of gratitude for his contributions in this role, and I wish him every success in his long-awaited return to full-time teaching.”

During his tenure, Hellwig helped navigate the Law School through a difficult financial period and oversaw significant improvements in applications and entering class credentials. Under his leadership, the school also achieved record highs in postgraduate employment outcomes for students, exceeded annual fundraising goals and stabilized its position as a top-tier law school.

“Brant really gave the alumni something of which they could be proud, something to celebrate and support,” said Laurie Rachford ’84L, a member of the W&L Board of Trustees and chair of the Law Committee. “He believes in this place, and that sincerity has been evident throughout his deanship.”

During a transitional period for the Law School faculty, which saw the retirement of many of the school’s longest-serving faculty members, Hellwig excelled on the faculty recruitment front, bringing to the W&L Law community a distinguished and diverse group of teacher-scholars. In particular, he increased the number of minority and female faculty members, the latter of which now comprise 50 percent of the permanent faculty.

Hellwig oversaw the creation of a dedicated legal writing program, along with the hiring of three full-time writing instructors. In order to develop closer ties between the Law School and the rest of the university, he helped create the Law, Justice and Society minor for undergraduate students, taught by faculty from all divisions at the university.

Hellwig also made many contributions to diversity and inclusion at the Law School during his tenure, and he was the driving force behind the installation of a display in the Law School honoring Leslie Smith ‘69L, the first African American graduate of W&L, and another display honoring the first female graduates of the Law School.

“I believe in the future of our law school,” said Hellwig. “We have a talented, committed faculty and staff. We have bright, decent students who will be a credit to our school in the legal profession. The Law School and the university are pursuing initiatives that will enhance the breadth of our community and the quality of our education in the process.”

Hellwig joined W&L Law in 2012 and served on a number of important faculty committees prior to being named dean in 2015. Despite the demands of the school’s top administrative post, Hellwig continued to teach a class each semester and made a special point of meeting every student during his weekly coffee and donut sessions with 1Ls. He was named Faculty Member of the Year by the student body in 2020.

An expert in the field of federal taxation, Hellwig has taught a variety of tax courses, including Federal Income Taxation of Individuals, Partnership Taxation, Corporate Taxation, and Estate and Gift Taxation. His scholarship in the tax field is similarly varied, ranging from the income tax treatment of deferred compensation arrangements of corporate executives to the estate tax treatment of closely held business entities employed as trust substitutes. He is the author of the books “The United States Tax Court: An Historical Analysis” and “Understanding Estate and Gift Taxation,” coauthored with W&L Law Professor Bob Danforth.

After serving as law clerk to the Hon. Juan F. Vasquez of the U.S. Tax Court, Hellwig began his academic career at NYU as an acting assistant professor. He then accepted a permanent appointment to the University of South Carolina School of Law, where he was a member of the faculty for 10 years. During his tenure at South Carolina and W&L, Hellwig received a number of institutional awards recognizing both his teaching and his scholarship.

Hellwig will return to the full-time faculty following a sabbatical, during which he will restart a number of research projects he deferred during his time leading the Law School.

“I look forward to joining my colleagues in contributing to the quality of our program and to the character of our school as a member of the full-time faculty, a position I am fortunate to hold,” said Hellwig.

Related //The School of Law
Tagged //Brant Hellwig, Dean of the Law School