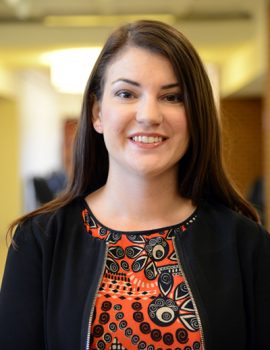 Webb is a student attorney in W&L’s Immigrant Rights Clinic, directed by law professor David Baluarte. Both Webb and Baluarte offered insight into an investigation of the Shenandoah Valley Juvenile Center in Staunton, Virginia. A WMRA report on conditions at the center centered on a class action lawsuit alleging that roughly 30 juvenile immigrants faced brutal and inhumane treatment while confined at the center.

Webb and Baluarte explained how unaccompanied juveniles often flee to the U.S. to escape violence in their home countries. And once detained, it can be very difficult for these children to get asylum and begin to recover from their experiences.

“They’re running from terrible situations that most people can’t imagine…the kinds of violence and things that they’ve been through and seen, it would be comparable to a soldier coming back from a war,” Webb said in the report.