Students in the International Human Rights Practicum at Washington and Lee School of Law traveled to Tanzania this fall to research the problem of early marriage and its effects on girls’ access to education. Along the way, they discovered that early pregnancy also was a serious problem in the country.

The results of the study, along with recommendations for improving the situation, have now been released in a 40 page report, available online. 3L Emily Tichenor, who participated in the class, says that there are many economic, social and cultural issues contributing to the problem.

“There are many factors that lead to early marriage, including a patriarchal culture and conflict of laws issues between customary law, statutory law, and Islamic law,” Tichenor said. “I think the biggest factor, however, is poverty because many families are forced to marry their young daughters to receive a bride price and have one less person to take care of at home. Once the young girls are married, they often have children at a young age and the cycle of poverty continues.”

Nearly 30 percent of the population of Tanzania live below the basic needs poverty line, and consequently, women are often viewed as a family asset. They can earn money working outside the home, but they can also be married off in exchange for the customary “bride price.” The opposite of a dowry, bride price is paid by the groom’s family to bride’s family in the form of livestock or money.

This, combined with the costs associated with primary and secondary education, create pressure for girls to forgo education and to marry early. However, just how early depends on which legal or customary regime is applied. Islamic law allows girls to marry as young as nine, while national domestic law sets the minimum age at 15 for girls and allows for earlier marriage in certain circumstances. Provisions in the various international treaties and conventions that Tanzania has signed set the age of consent at 18 years. And because of this confusion in the law, there is limited enforcement of the minimum age by authorities.

Tichenor added, “It almost seems like a chicken and egg issue—does poverty cause these oppressive regimes that lead to the problem or do the oppressive regimes cause poverty? Because there are so many factors contributing to early marriage and early pregnancy, it is difficult to isolate any one factor.”

Another student in the class, Yasin Amba ‘16L, has up-close experience with this problem. He was born in southern Ethiopia, where he says early marriage remains common. His mother was married to his father at 13, and Yasin was born the following year.

“The practice remains integral to most cultures, especially those in the more rural areas where families support themselves through subsistence farming,” Amba explained. “While education may or may not be valued, more pressing is the need to feed their families and maintain ties within their communities by creating alliances with another family through the marriage.”

Before traveling to Tanzania, the students in the class began their semester researching the Tanzanian legal system and the law and policy around early marriage and education. They also conducted a number of practice interviews specifically designed to teach them how to extract the most accurate information from people often reluctant to speak out on sensitive issues.

On the ground in Tanzania, students worked with lawyers in Dar Es Salaam from the Women’s Legal Aid Centre (WLAC), the same group that has assisted W&L students in previous years during trips to research access to legal aid (2014), labor and employment practices (2012) and sex crime enforcement (2009). During a weeklong fact-finding mission, students conducted more than 40 interviews in the Tanga and Lindi regions of mainland Tanzania.

One thing the students learned during their research was that early pregnancy prior to marriage is also a huge problem. Sex education is very limited and the penalties for statutory rape are severe, which leads to underreporting of these incidents to the authorities. And although there are no codified rules that require pregnant girls to leave school, most school administrators believe this is the case and will not allow the girls to return following delivery, whether they marry or not.

The report makes a number of recommendations for the Tanzania government, including the implementation of all relevant international treaties and protocols and amending the country’s Law of Marriage Act to provide a minimum age of eighteen for both girls and boys and for all types of marriages. Of all the recommendations, Amba believes a law that specifically allows pregnant girls to remain in school and to return after giving birth is key to solving the problem.

“I consider this to be the most important because it is one that can be implemented and enforced immediately,” he said.

The International Human Rights Practicum, taught by Prof. Johanna Bond, is one of the practice-based courses that are part of W&L’s innovative third-year curriculum. Such classes are designed to prepare students for their careers by simulating a variety of legal practice environments, but as with many of W&L’s practicum courses, this class goes well beyond “simulation” by engaging students in the investigation of actual cases of human rights abuse.

“This class was an incredible experience, and it is very rewarding to know that our work will be incorporated into a report to the UN and can have a tangible effect in improving the lives of girls and women throughout Tanzania,” said Tichenor. 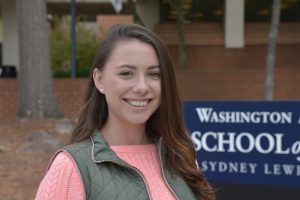