On Tuesday, August 23, Washington and Lee University School of Law enrolled 125 students in the J.D. Class of 2025.

“We are delighted to welcome an incredibly talented and accomplished law class to the W&L Law community. I look forward to watching them develop into capable lawyers and leaders during the next three years under the guidance of our exceptional faculty,” said Dean Melanie Wilson.

Seventy-two percent of the class worked for a year or more before entering law school in fields such as business, politics, the Peace Corps and the military. Twenty members of the class already hold graduate degrees from other institutions.

The first-year students hail from 28 states, the District of Columbia, and eight foreign countries, including Bolivia, Canada, China, Costa Rica, Italy, Pakistan, Slovakia, and the United Kingdom. The U.S. state with the greatest representation is Virginia, followed by New York, Texas and Florida.

A number of the members of the Class of 2025 have worked abroad and traveled extensively. Consistent with this international orientation, members of the class speak a variety of languages including American Sign Language, Ancient Hebrew, Arabic, French, German, Punjabi, Italian, Japanese, Korean, Latin, Mandarin Chinese, Portuguese, Slavik, Spanish, Tagalog, and Urdu.

Among the skills, interests and life experiences of the members of the Law Class of 2025 are hiking, belly dancing, creating anime content, marching band, golfing, vegetarian cooking, rock climbing, and sculpting.  The class includes a yoga instructor, an EMT, a ranch hand, a food blogger, two lifeguards, a Shakespearean actor, a photographer, and a jiu jitsu specialist. 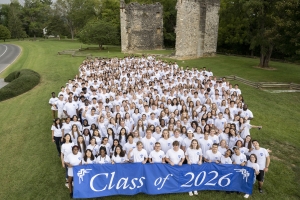 Washington and Lee Welcomes the Class of 2026