Washington and Lee is pleased to welcome three new faculty members this year. 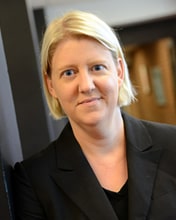 Prof. Haan received a B.A. in History from Yale University and a law degree from Columbia Law School, where she was an articles editor of the Columbia Law Review.  Prior to joining legal academia, Prof. Haan worked in the litigation department at Davis Polk & Wardwell in New York and as a Teach for America teacher in Compton, California.  Prof. Haan is admitted to the bar of New York State, to the U.S. District Court for the Southern District of New York, and to the U.S. District Court for the Eastern District of New York. 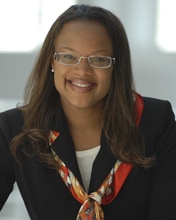 Kristin Johnson is visiting W&L for the fall semester as the Lewis Law Center Scholar in Residence. In addition to pursuing her research interests, Professor Johnson will teach Securities Regulation. She is visiting from her home institution of Seton Hall Law School.

Prior to entering the legal academy, Prof. Johnson served as Assistant General Counsel and Vice President at JP Morgan and practiced law as a corporate associate. During her tenure in private practice at Simpson, Thatcher and Bartlett LLP’s New York and London offices, she represented issuers and underwriters in domestic and international debt and equity offerings, lenders and borrowers in banking and credit matters, and private equity firms and publicly traded companies in mergers and acquisitions. Prior to law school, she was an analyst at Goldman Sachs & Co. 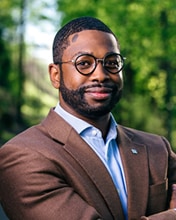 Hernandez Stroud, a 2015 graduate of W&L Law, returns to Lexington for a one-year appointment as a Visiting Assistant Professor. He will teach a seminar on civil rights, an advanced legal writing seminar, and a practicum course on statutory interpretation.

After graduating from W&L, Prof. Stroud served as a fellow at the Information Society Project at Yale Law School and as acting director of development and policy for the City of New Haven. He then clerked for a U.S. District Judge in the Northern District of Alabama. Following his term as a VAP at W&L, Prof. Stroud will take a  clerkship position with the U.S. Court of Appeals for the First Circuit.

Stroud received his B.A. from the University of Alabama at Birmingham and a M.Sc. in Education Policy for the University of Pennsylvania. Before attending law school, he taught history and government in Philadelphia for Teach for America.