W&L Law’s Mark Drumbl Deepens Understanding of Child Soldiers in New Book The Research Handbook on Child Soldiers brings to bear a unique array of perspectives to unpack the life-cycle of youth and militarization—from recruitment, to demobilization, and return to civilian life. 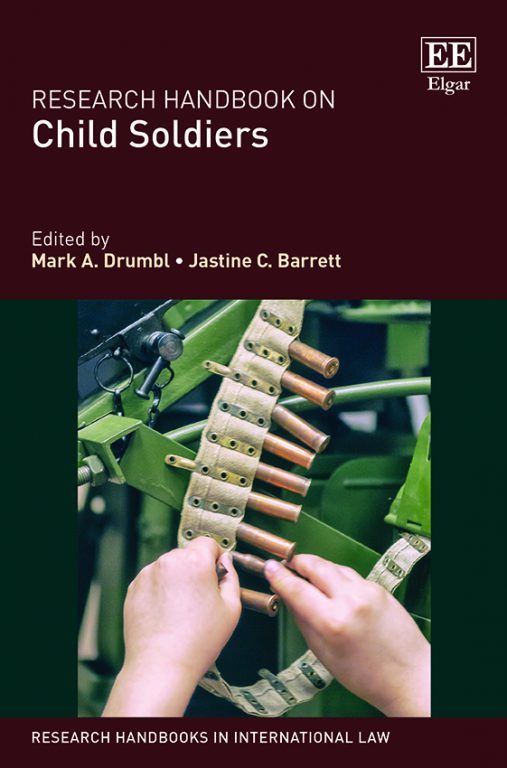 Washington and Lee Law Professor Mark Drumbl was in the vanguard of scholars studying the problem of child soldiers in conflict zones with his groundbreaking 2012 book Reimagining Child Soldiers, published by Oxford University Press.

Since then he has remained active on this topic in teaching, research, and consulting – notably in recent years grappling with thorny questions surrounding recruitment of children into terrorist groups such as ISIS and their reintegration into society to prevent further violence. He now returns to this subject in a new capacity: as co-editor (together with Dr. Jastine Barrett, a British lawyer and researcher at the University of Kent law school) of a dynamic new project that brings together over two dozen contributors from six continents.

This project is the Research Handbook on Child Soldiers, published in August 2019 and available now from Elgar Press. This tour-de-force brings to bear a unique array of perspectives to unpack the life-cycle of youth and militarization—from recruitment, to demobilization, and return to civilian life.

“As editors, we sought to imbue the project with a global scope, with disciplinary diversity and with innovative perspectives,” said Drumbl. “We hope to lift the reader beyond customary places and reflexive spaces and increasingly ill-fitting conventionalities.”

By way of example, Drumbl notes that some of the contributions in the research handbook aim to ‘surface’ the experiences of girl soldiers who, despite constituting around 40 percent of child soldiers worldwide, are often invisible from the imagery of child soldiering. Another angle aims to recognize the diversity of experiences of boys, including as perpetrators but also as victims of horrific sexual violence.

“We intend for the Research Handbook to be of interest to academics, practitioners, activists, officials, diplomats, global civil society, and students from all walks of life concerned with the rights of the child,” said Drumbl. “While the Research Handbook sets out how children caught up in violent circumstances experience adversity, loss, and pain, we hope it strikes a resonant chord with its emphasis on the capacity, humanity and potentiality of youth – and inspires thinking about children in times of peace as well as in the ‘in-betweens’ –  after and around and before war.”

The introduction to the book, written by Drumbl and Barrett, is available to read for free online. Also available is a contribution from Mohamed Kamara, professor of French and head of Africana Studies at Washington and Lee University, titled “In Search of the Lost Kingdom of Childhood.”

Drumbl is an expert on international and transnational law, with a particular focus on mass violence and human rights. For him, this project maps onto a key factor in why atrocity metastasizes in certain places and spaces.

“It is the involvement of ordinary people, often victims themselves, who then victimize others in painful ways,” said Drumbl. “Until and unless we recognize this searing element of wide-scale human rights abuses, our collective understanding of why these tragedies happen and how to stop them remains impoverished.”

Critical Acclaim for this Book

‘The Research Handbook on Child Soldiers is well balanced, and is less on abstractions and philosophizing, and more on offering erudite principle based solutions in respect of our efforts to conceptualise and understand child soldiers across disciplinary and professional divides. True to form, it also charts the way forward as the international community grapples with the ever changing nature of conflict. This book is not so much an idea whose time has come as it is an idea whose time is long overdue in coming.’

– Benyam Mezmur, University of the Western Cape, South Africa, former Chairperson of the United Nations Committee on the Rights of the Child (2015-2017)

‘For this Research Handbook, Jastine Barrett and Mark Drumbl have assembled an array of scholars, drawn from six continents, with expertise in multiple fields of law, humanities, and social sciences. Their writings deploy methodologies as varied as empirical study and doctrinal analysis in order to examine situations of armed conflict and other systemic violence, across a temporal spectrum of past, present, and future. Together, these contributions place this exciting volume at the vanguard of scholarship on child soldiers.’

– Diane Marie Amann, University of Georgia, School of Law, US, Special Advisor to the International Criminal Court on Children in Armed Conflict

‘This Research Handbook of vivid research on child soldiers memorably exposes how some youth engaged in armed conflicts forget they are still children. Contributors bring rich expertise in law, sociology, ethnography, social work, psychology, political science, criminology, medical anthropology, and literary analysis to the cultural and political contexts for recruiting minors by armed groups and by national military organizations. Beyond dominant images of child soldiers as either merely passive victims or as violent terrors, the authors point toward legal and cultural reforms while cautioning against doing further harm.’

Mark A. Drumbl is the Class of 1975 Alumni Professor at Washington and Lee University, School of Law, where he also serves as Director of the Transnational Law Institute. He has taught and lectured world-wide throughout Africa, Asia, Europe, South America and Australia. He held visiting appointments with a number of law faculties, including Oxford, Paris II (Pantheon-Assas), Melbourne, Sydney, VU Amsterdam, Masaryk, and Ottawa.  His scholarly interests include public international law, transnational legal process, international criminal law, and transitional justice. His books Reimagining Child Soldiers in International Law and Policy (Oxford University Press, 2012) and Atrocity, Punishment, and International Lawc (Cambridge University Press, 2007) have been widely reviewed and have earned critical acclaim. His work has been cited by numerous courts, he has consulted broadly, and has served as an expert in legal proceedings.