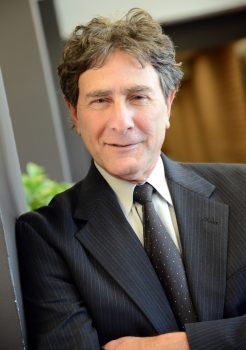 Shapiro, along with W&L, received the Impacting Justice Award from the organization during their annual Justice for All event. This spring and summer, Shapiro filed and litigated two state habeas petitions to overturn criminal convictions being used to deport his client from the country. The client, now in her twenties, has lived in the U.S. since the age of eight and has two children who are U.S. citizens. Her entire family lives in the U.S., and she has not returned to her native country since coming here as a child.

“Since coming to W&L and limiting my active practice of law, I have been looking for a way to continue to use my skills for the public good,” said Shapiro.  “Working with W&L students like Katie Sheild on cases like this has enabled me to continue working for social justice and involve the school as well.”

At W&L, Shapiro teaches Criminal Law and Criminal Procedure as well as the Criminal Practice Practicum. He has practiced criminal law in the federal and state courts for more than 40 years, and has been listed for years in the Washington Magazine’s survey of best criminal lawyers.  Among his more notable cases, he represented accused spies Harold Nicholson, a CIA station chief, and NSA employee Brian Regan.  Along with his partner Peter Greenspun, he represented “Beltway Sniper” John Allen Muhammad.