UPDATE: Jeb Byrne and Marc Mignault made it to the finals of the ABA negotiations competition, finishing fourth nationally. For an interesting recap of what occurred, read Marc’s write-up below the original story.

The Washington and Lee School of Law team of John Byrne ’15L and Marc Mignault ’15L will compete at the American Bar Association’s 2014 National Negotiations Competition, to be held in Chicago February 7-8.

The ABA-sponsored competition begins in the fall each year with school-based competitions, followed by regional tournaments. The competition tests students’ practical legal skills by emphasizing teamwork and the ability to solve disputes in a negotiation, pre-trial setting.

Byrne and Mignault secured an invitation to Nationals following a second place finish at the regional competition held last November in Williamsburg, Va. At the national competition, the W&L team will face off against law schools spread across the ABA’s ten student division regions.

During the negotiations competitions, teams of students acting as lawyers for opposing parties receive confidential information about how they can best represent their clients’ interests. The teams work together in a limited time frame to find a compromise that is acceptable to both of their clients. The disputes involved in the national competition will center on contract law.

Negotiation is one of several ABA-sponsored competitions that help students develop the kind of practice skills they will employ as professional attorneys. Other competitions include Appellate Advocacy, Mock Trial, Mediation, and Client Counseling.

Now that Jeb and I are back and finished with the competition, I wanted to send a recap of what happened and how we did. To save suspense, we made it through to the finals of the competition, when it was down to four teams, but we eventually lost to the champions. Overall we placed fourth and are recognized as National Finalists.

In the first round, we were matched against a team from St. Johns School of Law. We were representing OCL and Nathan Orloff, a laser technician who contracted with Dunbarton, a medical institute. Nathan had difficulty satisfying Dunbarton’s needs of enhancing their cosmetic laser because his sister recently passed in an accident and was burned, which led him to focus only on the reconstructive lasers. Fortunately we were able to come to an agreement on the hiring of an assistant for Nathan to help with the cosmetic work. Also, we were able to keep the share of royalties of any of Nathan’s patents at a 45-55% basis, in favor of Nathan, and we kept Dunbarton from placing any time restrictions on his work week or any specific time allocation on his work. All were specific needs.

In the second round, later the first day, we faced a team from Samford School of Law. We represented Hival, a web retailer, who had contracted with Allway, a discount retailer with stores around the country. Both clients had altered their respective business plans during the 5yr term contract, which was an exclusive dealing contract. Hival instituted a discount points program in order to attract more customers, but that led to Allway losing sales. Fortunately we were able to break out of the exclusive dealing contract and enabled our client to sell to others on a bit of a higher percentage than we sold to Allway. We also were able to extend the life of the contract to ensure our client remained solvent. We were able to get the contract on a two year extension because our client wanted nothing longer than that, but also nothing much shorter either. We achieved this by raising web prices a minimal amount and also by adding the incentive of fulfilling the store’s exchanges and returns, due to our ability to ship with no cost.

Later that night it was announced that we would move onto the semifinals in the morning on Saturday. So we spent most of the night and the next morning preparing. Then we faced Hastings College of Law. Here we represented Janet Kingsley of USSE, who was installing a new tracking system in a grocery chain. The tracking systems would connect membership customers’ information with what they purchase, what aisles they visit, their emotional information, as well as some minute physical detail such as anger or happiness. RSI had breached the contract by falling out of compliance with NASCIO, of which our client was a founding member. Luckily we were able to extend the contract to fulfill all of the installation in the North American stores, which would provide our client the funds she needs for research and funding an app she is hoping to launch soon that would allow people to block the system if they are not a member of the store. We also retained property rights in the tracking systems to give our client the right to remove the systems if NASCIO was violated again. Then we were also able to restrict the scope of information that the grocery stores were able to record and connect to customer information. Finally we were also able to install a real-time monitoring system in all stores to ensure that NASCIO was complied with. We were able to get this by advocating for a joint ad campaign to show our commitment and promotion of our products along with the store.

After that round, the finalists were announced. 24 teams competed in the first two rounds, 16 in the semifinals, and four in the finals. Luckily Jeb and I were once again chosen to move on. In the finals, we faced a team from Lewis and Clark School of Law (the eventual National Champions). We were representing Carl Denning and CNO who were creating a new fuel for a hazardous waste company, RSI. RSI was nervous with the new expansion of their system due to an ad campaign they planned to start in two months, but we could not finish the expansion for 6-9 months. While we opened strong and came out meeting our clients needs, having RSI agree to our scope of the expansion and getting RSI to agree to a 6 month time on the expansion, we needed to cover a few costs for them in the mean time in order to allow for a bit of a smoother transition. Unfortunately in the end, all though we came out with a great deal for our client, the judges found the other side had executed better than we did.

All in all we were able to take fourth place. From regionals, and a pool of 227 teams and 162 schools, we were able to make it to the final four and put forth a great effort against the national champions and lost in a close nail biter.

Jeb and I each valued this experience for the incredible practical experience and for the opportunity to represent W&L. We truly wanted to show just how great the students here are and how such an outstanding education can provide us the ability to compete with the top schools in the country. We cannot thank the school, the administration, our coach Dominik Taylor and the entire Moot Court Board, and most importantly our fellow students for their support and motivation. We couldn’t have asked for a greater community to have behind us, and we are truly grateful to have had the opportunity to represent this great school. 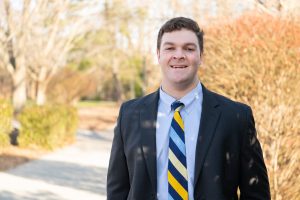 ‘Join the Team, Whatever It Takes’
Related //The School of Law
Tagged //ABA, negotiations, Old Wordpress