W&L Partners with Lexington Fire Department for Safety Training This year’s orientation for Residential Advisors and Community Assistants included a mock fire designed to show students how to quickly and safely escape a burning building. 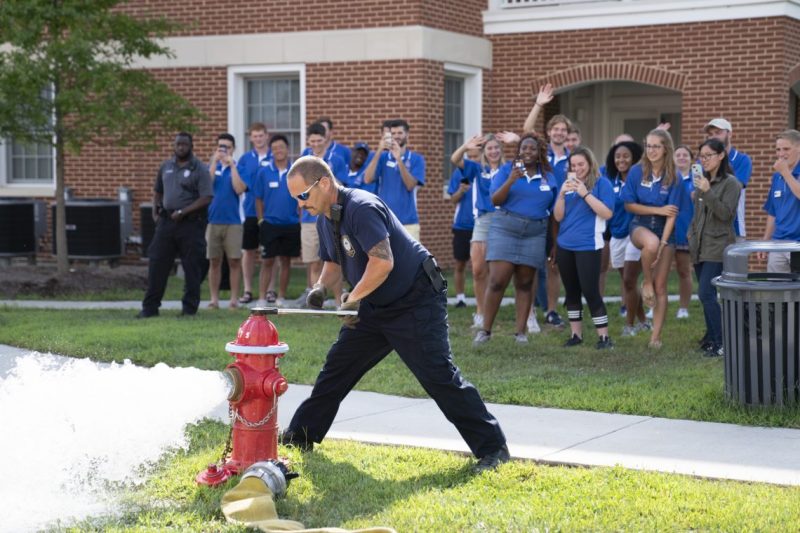 W&L Residential Advisors and Community Assistants cheer as a Lexington firefighter opens the fire hydrant as part of fire safety training for the 2019-2020 school year.

By the time the ear-splitting peals of the fire alarm sounded, the living room of apartment B2 was so thick with smoke that students could barely see the front door. They stooped low and scurried for the exit, pounding on bedroom doors and shouting “Get out!” as they rushed to escape.

The scenario felt as real as the fire engines that came screaming through Washington and Lee’s Third-Year Village in response to the alarms. Fortunately, the fire was not real — it was part of a new fire safety training program for Residential Advisors (RAs) and Community Assistants (CAs) that was coordinated with the Lexington Fire Department.

Before the start of every school year, RAs and CAs must go through an extensive orientation that includes fire safety training, but this was the first time the university staged a mock fire complete with smoked-out rooms. The idea came from W&L’s new director of Residential Life, Chris Reid, who underwent similar training when he was an RA at West Virginia University.

“It allows you to navigate low visibility and get a taste of a real-life situation,” Reid said. “It also allows us to partner with the Lexington community, Public Safety and the local fire department to build rapport among all those different entities.”

The training on Aug. 22 started with a talk by Paul Burns, W&L’s director of environmental health and safety, and Mark Fontenot, the university’s fire safety systems inspector. Their presentation included videos that show how quickly a fire can get out of control (three to four minutes), how to use a fire extinguisher, and what to look for when conducting safety inspections in residential housing.

As part of that session, each student got a turn at putting out a fire with a fire extinguisher — but gone are the days of setting real fires and using real extinguishers to accomplish this training. W&L owns a system that generates a digital fire and allows trainees to use a laser-driven fire extinguisher to practice the aim and sweep technique that quickly and safely puts out a blaze.

Next, the group of 48 students was ushered to a staging area outside Civic Building B, where an empty upstairs apartment had been prepped for the exercise, with blacked-out windows. Reid joked with them that the scene would look familiar “if you have ever been to a haunted house or a house party.”

Students were advised to stay as low as possible as they escaped, to treat the smoke as if it was harmful — it wasn’t, but smoke from a real fire contains cyanide and other poisonous substances that can quickly render a victim unconscious. They were also told to rely on their other senses to do what is most important in that situation: make sure everyone is out of the apartment as quickly as possible.

“A fire is serious business. It really is,” said Lexington Fire Marshal Trent Roberts. “If you are missing a friend, find a security officer immediately.”

Students were taken to the apartment in groups of 12, told to close themselves in bedrooms, and made to wait while Burns used a fog machine to fill the living room with “smoke” (the digital fire had also been moved to the living room, where it cast an eerie orange glow through the fog). Fontenot then set off the fire alarm to signal that it was time to go.

During the first run-through, the Lexington Fire Department responded in real time, complete with lights and sirens. Upon arrival, firefighters practiced pulling hose lines and connecting to a fire hydrant outside Building B. When a plume of water gushed from the hydrant, the students cheered. Firefighters even brought a ladder truck, parked it on the other side of the building, and extended the ladder as if preparing to help students escape from upper floors.

After the “victims” escaped the building, W&L Public Safety officers conducted a check for stragglers. Then the entire scene was reset for the next group of students. Each group exited the smoky apartment quickly, and some decided to make the drill more realistic by carrying a fellow student down the stairs.

Head CA Austin York ’20 said he’s been through the fire safety training multiple times, but he has never found it as eye-opening as this year’s event.

“I was surprised by how quickly they could smoke up a room. It was even more real than I thought,” he said. “It was really cool to get the hands-on experience.”

Leia Barrow ’21 was struck by how disorienting it was to lose the use of vision during the escape. That was just one aspect of the drill that could not have been communicated as effectively through lecture alone. “Having the actual experience puts you in the situation far more than being lectured to,” she said. “They had 100% of my attention.”

For Sam Dutcher ’21, the mock fire was something of a relief. She said the thought of experiencing a fire as an RA makes her very anxious, “so it was really nice to simulate one.”

Students weren’t the only ones who benefited from the exercise. Director of Public Safety Ethan Kipnes and his staff were able to meet the new group of RAs and CAs, and they got the chance to practice their own role in an emergency situation.

Lexington Fire Chief Ty Dickerson said it helps his firefighters to be on campus and interact with students during a positive, low-pressure situation. “It lets us meet these folks so we aren’t meeting them for the first time at three o’clock on the morning,” he said.

For many college students, he said, the local fire department can come across as just another bunch of officials harping about rules such as not parking in fire lanes. After the mock fire, students had a chance to check out the fire engines and ask questions about the job of local firefighters.

“We are hoping this will help to give them a real understanding of how we operate,” Dickerson said, “and we’re hoping that these students will be our ambassadors with everyone else here.”