W&L Presents Public Lecture with Historian Karen L. Cox Cox is an award-winning historian and a distinguished lecturer for the Organization of American Historians. 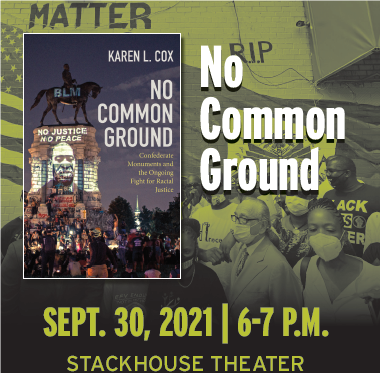 Washington and Lee University presents a public lecture with Karen L. Cox, an award-winning historian and a distinguished lecturer for the Organization of American Historians, on Sept. 30 at 6 p.m. in Stackhouse Theater on the W&L campus.

In her talk, which is free and open to the public, Cox will discuss her latest book, “No Common Ground: Confederate Monuments and the Ongoing Fight for Racial Justice.”

The book examines the long history of Confederate monuments, from those first built after the Civil War to the protests against them in the summer of 2020.

“We are so excited to welcome Karen Cox to W&L,” said Molly Michelmore, professor of history at W&L. “Her latest book takes a close and historically grounded look at the relationship between Confederate monuments, the commemoration of Confederate leaders and the ongoing struggle for racial justice in the United States.”

Cox is often called upon for her expertise in Southern history and culture, and she is the author of multiple books on the subject. Her first book, “Dixie’s Daughters: The United Daughters of the Confederacy and the Preservation of Confederate Culture,” won the 2004 Julia Cherry Spruill Prize from the Southern Association for Women Historians for the Best Book in Southern Women’s History. She’s also the author of “Dreaming of Dixie: How the South Was Created in American Popular Culture” and “Goat Castle: A True Story of Murder, Race, and the Gothic South.”

Cox has also written op-eds for multiple publications, including the New York Times, the Washington Post, CNN and TIME.