W&L Student Appears on “Meet the Press” Avalon Pernell, a rising sophomore from Alabama, appeared on a “College Roundtable” segment that featured college journalists interviewing the mayor of Pittsburgh. 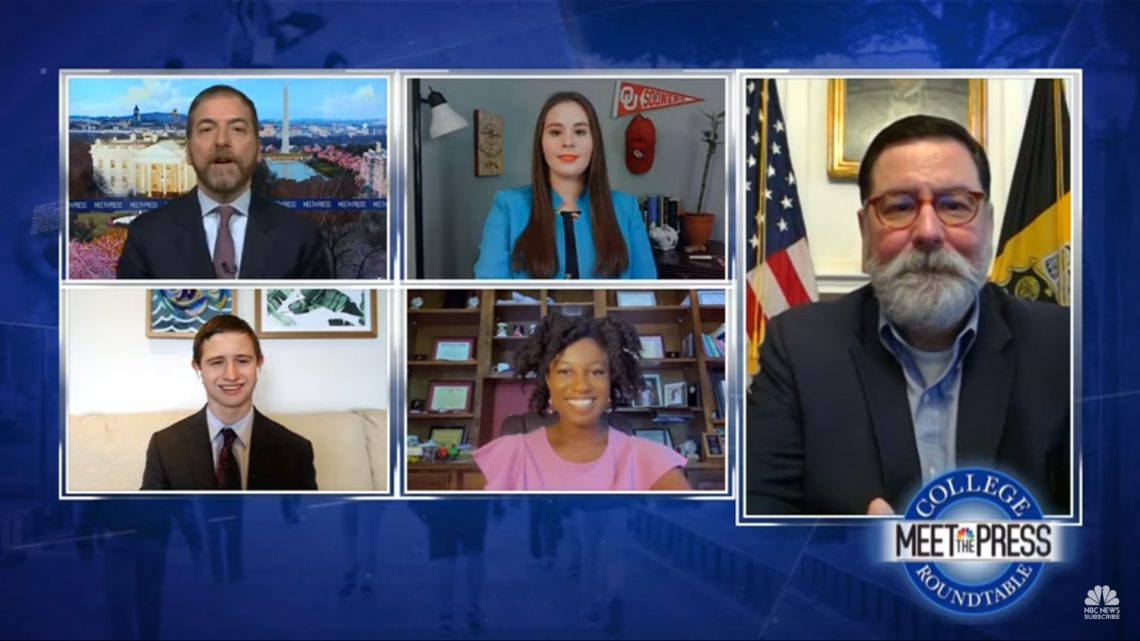 Washington and Lee University journalism student Avalon Pernell ’23 recently got a chance to practice the craft on national television as part of a panel discussion on NBC’s “Meet the Press.”

Pernell, of Tuscaloosa, Alabama, was one of three college journalists selected to appear on the show’s June 11 “College Roundtable” segment with host Chuck Todd. Each student was asked to pose at least one question to Bill Peduto, mayor of Pittsburgh, and Pernell chose to question him about police use-of-force reforms.

“They gave us the freedom to ask whatever questions we wanted,” Pernell said. “There were three different directions I wanted to go in, but I went with what I felt were my strongest questions.”

Pernell was invited on the show after a W&L law graduate, who is friends with a producer on “Meet the Press,” got word to journalism professor Toni Locy that the show was looking for exceptional student journalists. Locy recommended Pernell, who has worked as an anchor and weather reporter on W&L’s news program, the Rockbridge Report, and is the news editor of the student newspaper, The Ring-tum Phi.

Pernell was interviewed several weeks ago for a chance to appear on the show. At that time, she was being considered for interviews with the presidents of Howard University and University of Arizona. When she didn’t hear back, she assumed that she hadn’t been selected. Then, just last Tuesday, she was contacted by producers and asked to prepare questions for Thursday’s episode with Peduto.

Student journalists from the University of Oklahoma and Indiana University joined Pernell in the segment, asking Peduto questions about police funding and student debt. When it was Pernell’s turn, she concentrated on controversial police tactics, asking Peduto how he would enforce policies already in place, such as rules against chokeholds. Peduto replied that it may not be enough to include such rules in police department policy; it may be necessary to make them part of the city code. He also said that ongoing police training is necessary to avoid excessive use of force. See the full segment here.

Pernell, who plans to double major in journalism and politics, said her journalism classes assisted her during this opportunity. “Professor Locy’s Intro to Journalism class was very helpful in getting me into the framework of what kind of questions to ask,” she said, “and working with Professor Kevin Finch on the Rockbridge Report has taught me how to not get flustered under pressure.”

During one live taping of the Rockbridge Report, she said, her wireless earpiece malfunctioned, and she had to ad lib. That experience came back to her last week, when her internet unexpectedly quit just before her scheduled appearance on the show. She quickly adapted and used her cellphone instead, but she was disconnected once during the segment. Fortunately, it did not happen during her question, and she was able to quickly reconnect. Despite those anxiety-inducing snafus, she appeared totally calm and collected on the air. “I would have been way more stressed out had those things not happened with the Rockbridge Report,” she said.

After her appearance on the show, Pernell said, she heard from a number of W&L professors and fellow students who reached out to congratulate her on a job well done. Her appearance was also the subject of a story on WSLS-10, the NBC affiliate based in Roanoke, Virginia.

“This experience cemented the fact that journalism is definitely something I want to do,” she said. “It was a great example of what the life of an actual TV anchor, or broadcast journalist, would be.”