W&L Student Interviewed on BBC ‘World News’ Anna Bosking, a first-year student at W&L, appeared on a BBC interview panel to discuss her perspective as a voter after last week's vice presidential debate. 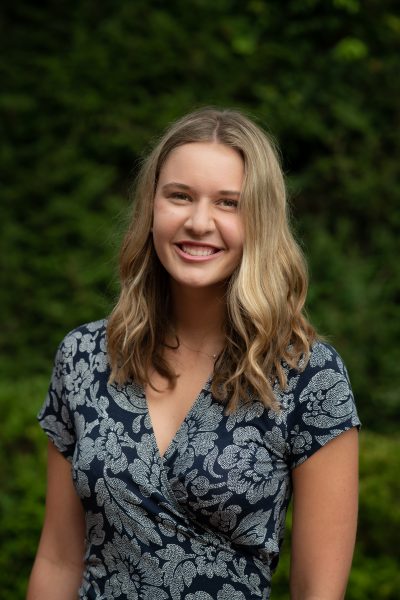 The BBC’s “World News” television program interviewed Washington and Lee University student Anna Bosking ’24 after the vice presidential debate on Oct. 7. During her interview, Bosking presented her thoughts as a young voter.

“I wasn’t aware of the enormity of the audience until right before the segment,” Bosking said. “It was definitely one of the coolest things I have ever participated in.”

Bosking is acquainted with the network through a BBC youth advisory board she applied for and served on during her senior year of high school. This fall, BBC producers reached out to her about an interview after the debate, and Bosking weighed in with her opinion on presidential candidate Joe Biden.

“We are moving more and more away from democracy, and I think Joe Biden has proved he will fight for the American people,” she said. “I think he will be a servant for all, no matter party affiliation, race or religion, and I think that is the heart of what America is.”

At Washington and Lee, Bosking plans to major in politics and economics with a minor in poverty and human capability studies. This term, Bosking is enrolled in a course entitled Election Politics, taught by Bob Strong, William Lyne Wilson Professor of Political Economy.

“The discussions we have in class definitely helped me develop informed opinions following the debate,” she said. “Washington and Lee does a great job of encouraging meaningful and engaged dialogue in class.”

While nothing official is planned, BBC producers told Bosking to be prepared for future interviews, indicating they would like to have her on again in the coming weeks to comment on the election. For now, Bosking is staying informed and will be ready to share her thoughts if she gets the call.