W&L Updates Climate Action Plan Washington and Lee University has already exceeded carbon-reduction goals for 2013 and 2020. The latest updates keep the university on track to achieve carbon neutrality by 2050. 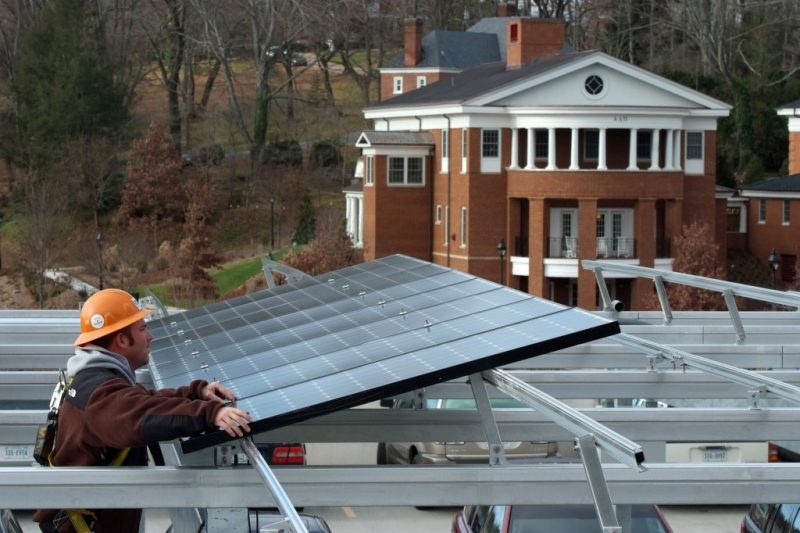 Washington and Lee’s Climate Action Plan (CAP) has been updated to identify and adopt specific steps to be taken over the next decade in order to meet the university’s goal of achieving carbon neutrality by 2050.

President Will Dudley has approved the update, which was prepared by the University Sustainability Committee (USC). In the coming weeks members of the university community will be invited to a series of conversations about the plan.

Those first two goals have been met and exceeded through a combination of efforts, including equipment upgrades, changes in both university operations and community behavior, and numerous sustainability initiatives.

The campus kBtu was reduced by 27 percent by the target date of 2013 and decreased by 38 percent by 2018. In addition, greenhouse gas emissions have fallen by 34 percent from the 2007 levels, surpassing the initial 20 percent goal in 2018, two years ahead of schedule.

These achievements were especially notable since they occurred even as the university added more than 200,000 square feet with the construction of both new upper-division housing and the natatorium.

“These strong results are thanks to superb work by the University Sustainability Committee as well as staff in the offices of university facilities, sustainability and energy education,” Dudley said. “Now the updated plan establishes the interim goals for the next decade that will keep us on schedule to reach carbon neutrality by 2050. At the same time, our efforts to reduce carbon emissions represent a key component of our 2018 Strategic Plan, which calls for stewarding our institutional resources responsibly.”

The updated CAP establishes interim goals to be met in five specific areas by 2029:

“I hope that we will think of this new plan not as a splashy new, radical approach, but as a continuation of the work that flows from commonsense principles,” said Jane Stewart, energy specialist in the Office of Sustainability and Energy Education and co-chair of the University Sustainability Committee, which created the plan. “As we prepared this document, we saw it not only as a time to pause and reflect on what’s been accomplished, but also, and primarily, as a way to indicate the careful work that needs to come next.”

In Stewart’s view, the community will need to guard against inertia in order to reach the proposed interim goals.

“We now have a 10-year horizon for interim goals for this overall goal we’re trying to achieve by 2050,” she said. “I think there is a danger that these timelines could obscure the sense of urgency that’s required. That will be one of our challenges in the coming months. President Dudley’s support and approval of the plan, combined with the inclusion of environmental stewardship in the strategic plan, illustrate the institution’s commitment, and that has been very important to the committee in our deliberations.” 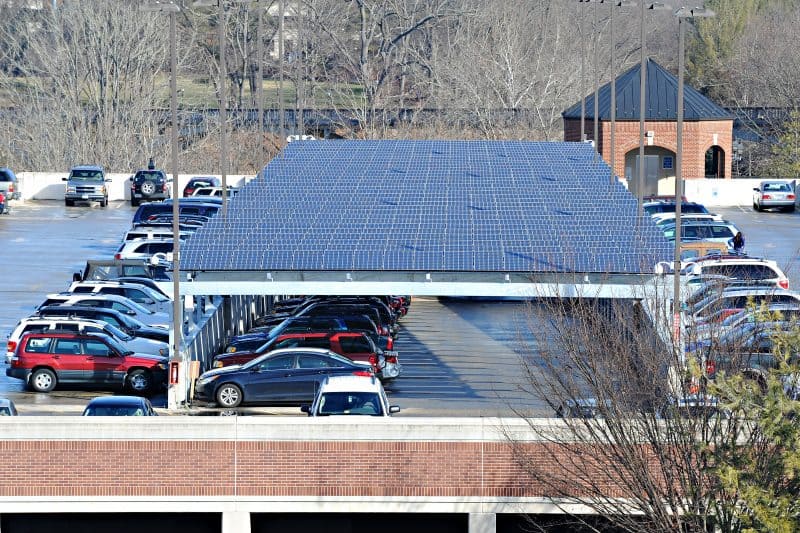 According to the plan, W&L’s carbon footprint in 2018 was 17,311.3 Metric Tons of Carbon Dioxide Equivalent (MTCDE). Of that total, nearly half (47 percent) is from purchased electricity. Another 36 percent of the total comes from “stationary and mobile combustion,” representing emissions produced on campus from such sources as campus power production, campus vehicle fleets, or refrigerant leaks. The smallest percentage, about 13 percent, is from sources that are not owned or controlled by the university but are still central to the campus operations — including such items as student and faculty commuting.

Since purchased electricity and natural gas are central to the campus emissions, a primary focus of the CAP targets reductions in these areas. The initiatives proposed to reduce energy consumption fall into four categories: behavior and operations, infrastructure improvements, new construction and renovation, and renewable energy sources.

“Of the various initiatives that are proposed in this plan, I think the potential of increasing our renewable energy portfolio, including an offsite renewable energy project, will probably be viewed as a highlight of the plan,” said Elizabeth Knapp, director of the Johnson Program in Leadership and Integrity and co-chair of the University Sustainability Committee. “As we consider potential projects in renewable energy, we want to be sure that we are considering not only our energy goals but also recognizing how these efforts can be integrated with educational objectives.”

Currently, the university’s renewable energy portfolio consists of three solar photovoltaic arrays and a solar thermal array. Two of the solar photovoltaic arrays — one on the parking deck and the other on Lewis Hall — have a combined capacity of 444 KW to serve campus electricity needs. The third array is on the roof of the student pavilion and serves the electricity needs of Duchossois Tennis Center. The solar thermal array provides energy for the Leyburn Library’s hot water heating system.

These projects have served as visible signs of the institution’s commitment to environmental responsibility and have supported hands-on learning opportunities for students. “It’s important to make sure, as we pursue these initiatives, that our students continue to be able to have access to the projects,” said Knapp. “For instance, we have the website dashboards that illustrate, in real time, the electricity generated by our solar arrays, and students and faculty can also go onsite and examine these installations. Even with an offsite project, we would want to continue to involve students and faculty to the extent possible.”

Current state regulations limit the amount of electricity that can be generated by on-site renewable energy installations. That means it would not be possible for W&L to match 100 percent of its consumption with on-campus renewable energy. Even so, the new plan does propose some on-campus projects be considered, including as a way to help offset energy demand increases from new construction or renovation.

While renewable energy generation is seen as a critical component for reducing emissions, the plan emphasizes that other initiatives will be necessary, including a continuation of many practices that were instrumental in achieving the reductions during the past decade. These involve investments in infrastructure and equipment as well as sustained commitment of all community members to help maximize energy efficiency throughout the campus.

The interim energy goal for 2029 is a reduction in combined emissions from natural gas and electricity of 60 percent. Reaching that goal would reduce overall campus emissions by about 50 percent of the current total of 17,311.3 MTCDE.

In addition to the energy reduction, the interim plan calls for changes in the way the institution manages material waste with such new initiatives as a Sustainable Purchasing Policy and a formal policy on recycling and composting. A Waste Minimization Task Force was established in the spring of 2019 to explore best practices and to develop a plan that will set and meet targets. The goal is a 20-percent reduction in landfilled waste and paper purchase emissions by 2029. 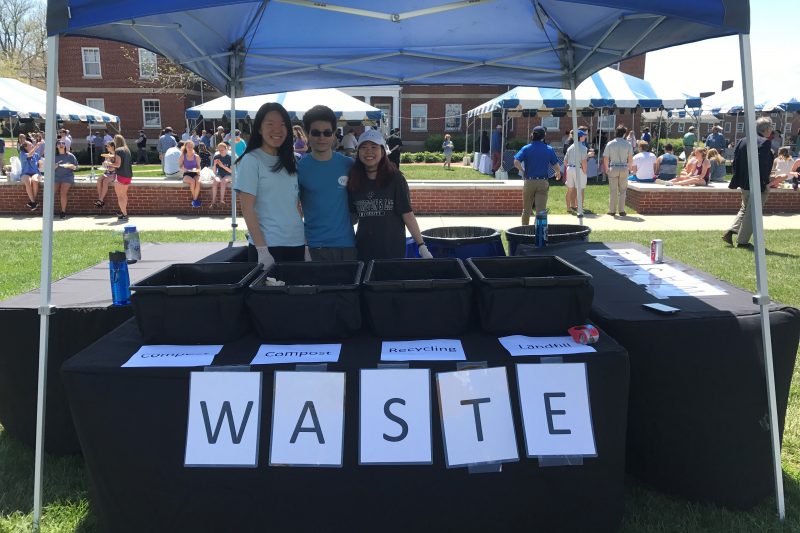 Trash-sorting tents at major events have been staffed by volunteers, like these students, and W&L staff.

The plan also emphasizes commonsense steps to reduce the emissions from transportation, including commuting by faculty and students. Departments will be asked to track vehicle usage, and there will be an ongoing effort to develop both goals and strategies for understanding and confronting issues related to vehicle emissions, including idling of campus vehicles.

As was the case with the 2010 plan, a major consideration will be to educate and engage the community in the efforts by increasing the visibility of such current initiatives as recycling, existing solar arrays, and the institutional commitment to meet LEED standards in all construction projects.

Underlying all the efforts outlined in the plan is a determination to assess each initiative based on the project’s potential to help the institution reach the overall goal of carbon neutrality by 2050.

“As we consider these goals, it’s critically important that we begin to see a shift to shared responsibility,” said Knapp. “When we consider not only the carbon neutrality goal but also our overall environmental stewardship, I believe we have to recognize that every individual and every department has a role to play. In addition, it’s important to realize that this plan, while focused on carbon emissions, complements the strategic plan’s call for environmental stewardship in all areas.”

Campus conversations on the plan will be scheduled throughout the fall and will be designed to provide members of both the campus community and the Lexington community with a greater understanding of how the plan was developed and the mechanisms that will be used to reach the goals.

“Although the impetus for this plan is climate action, I hope people will recognize that everything in this plan stands as a valuable enterprise even if we weren’t going to track our carbon emissions,” said Stewart. “Everything that has been proposed just makes good sense in terms of being an efficient, thoughtful organization. We aren’t doing anything to score points on some kind of national scorecard for ‘green’ schools. These are all things that we think are inherently commonsense ideas.”