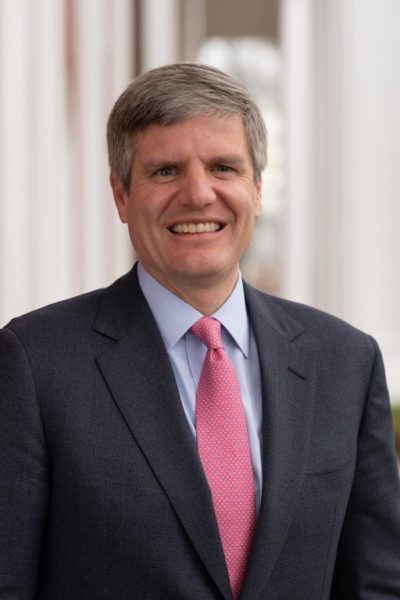 John Robinson, who graduated from Washington and Lee University in 1994 with a B.A. in economics, was sworn in as a trustee of his alma mater on Feb. 14, in Lexington, Virginia.

Robinson earned his MBA from the Tuck School of Business at Dartmouth College, where he was a Tuck Scholar. While there, he also earned his chartered financial analyst designation.

In 2014, Robinson was named president and chief executive officer of Aaron’s, Inc., a publicly traded, omnichannel provider of lease-purchase solutions. Prior to Aaron’s, Robinson was CEO of Progressive Leasing, president of TMX Finance LLC and worked in the investment banking groups at Morgan Stanley, Lehman Brothers and Wheat First Butcher Singer.

Robinson serves as a national trustee for the Boys and Girls Clubs of America  (BGCA) and together with his wife, Adrian Robinson, received BGCA’s Champion of Youth Award in 2019. He is a member of the Executive Committee of the Metro Atlanta Chamber of Commerce board of directors, a member of the University System of Georgia Foundation board of trustees and a member of the Williams School board of advisors at Washington and Lee.

As a student, Robinson was co-captain of the varsity soccer and track and field teams and was the 1994 recipient of the Preston R. “Pres” Brown Most Valuable Athlete Award.

Robinson and his wife, Adrian, live in Wilson, Wyoming, and have two sons, Will and Rice.